SWJ Book Review – “Rules for the Rebels: The Science of Victory in Militant History”

SWJ Book Review – “Rules for the Rebels: The Science of Victory in Militant History”

Rethinking Terrorism and its Path to Success or Failure 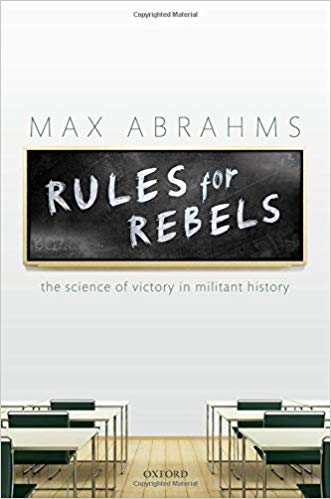 Rules for the Rebels: The Science of Victory in Militant History by Max Abrahms

Do terrorism and rebel groups have rules of the game? Why do terrorist groups act in particular ways despite the obvious militarized reaction of states? Why do some attack large centers of power such as New York, Paris or London, and others prefer to exploit small shops in Mogadishu, run passers-by on the Ramblas in Barcelona or blow up a cooking pot in the Boston Marathon? These are questions that manage to generate new insights and methodological analyzes about the rationality of rebel actors and terrorist groups.

Abrahms offers a complex and provocative view of terrorism. So far, concerns about the phenomenon of terrorism have been made, on the one hand, on the idea of its functioning, strategic capacity, scope and margin of destruction, on the other, on counterterrorism and public security policies to address to the threat. However, Abrahms proposal controverts the classic and traditional analyzes on terrorism. The author promises a critical view on the rules of the game and some categorical imperatives of terrorists as leaders and rational actors who see violence as an important vehicle for their message to succeed.

In the book Rules for the Rebels: The Science of Victory in Militant History, some initial reflections are made about the fact that security in the contemporary world has been transformed in a paradigmatic way and that is why the tendency to regular military confrontations between States is reduced to the maximum. In effect, the phenomena of insecurity escape and overflow the state capacities forming an entropic characteristic in which the irregular threats must be interpreted from different disciplinary edges for the construction of strategies that serve for the decision makers.

Max Abrahms manages to propose in his book Rules for the rebels: the science of victory in militant history (2018), that the leaders of different asymmetric groups forge rational dimensions in making their decisions and collective actions. Abrahms argues that rebel groups must have intelligent leaders, strategists capable of understanding the environment and integral social bases for the achievement of success in the pursuit of power, that is, their guiding principle throughout the investigation is summarized in that Leaders with strategic intelligence are not always successful, but a successful leader must be smart to achieve it. In other words, there is a science for the victory of terrorists and rebels as long as they understand that the notion of victory does not fall exclusively on the what but on the how. Those reflections, says Abrahms, were born in the framework of a field investigation in the West Bank in 2001 during the Second Intifada.

The author warns that most rebel and terrorist groups have a very low success rate in the attainment of power and never achieve their political objectives in the face of the inherent asymmetry of power with the respective government. Problems the above, Abrahms found that while some authors have paid special attention to the success of the Palestinian suicide bombings informal territorial concessions, the achievement of the group's objectives was more representative and conducive when three basic rules were followed.

The example he takes from an intelligent leader is that of Menachem Begin, leader of Irgun who became the Prime Minister of Israel after having blown up the King David Hotel in Jerusalem. In this way, it is interesting to note that although the rebels are against the established rules, to achieve the success they must follow some imperative rules. This leads to three fundamental rules to reverse the equation of success and build the optimal way to have power.

The first rule for rebels to win is called "Learning to win." That rule alludes to that terrorists have to know that not all objectives are achieved in the same way or with the same resources of violence, in fact, a rebel leader must understand that attacks against civilians are a recipe that will lead to failure. In other words, a terrorist group is 77% more likely to fail if its actions are against civilians. This rule establishes that a strategic leader must dose hostilities in the conduct of violence against objectives of high strategic value.

The second rule emphasizes creating a highly centralized structure. It consists in that the leader must restrict certain defining elements for the cause of the low-level members of the organization.

Finally, the third rule is to maintain its prestige as a group when the facts go wrong or the counterproductive acts in the achievement of the objectives. It distances itself from the previous rules in organizational matters to focus on the message and reputation of the terrorist organization. A rule that invites the leader of the group, in the style of a company manager, should know that reputation and prestige are crucial elements to achieve their goal.

Abrahms reflects on the strategic disasters that some terrorist leaders have had because they do not know the rules of victory. On the one hand, the beheadings made by the Islamic State transmitted live through social networks, and, especially, the beheading of the American journalist James Foley in 2014, together with the attack on the offices of Charlie Hebdo in 2015; these produced that the governments of Washington and of Paris dedicated their administrations and plans of war to persecute them and to destroy them. On the other hand, Abrahms continues with his argument emphasizing that when the Islamic State carried out the attack against tourists at the Istanbul airport, it motivated Erdogan to facilitate and cooperate with the United States to bombard key points of that organization from Incirlik. This resulted in a reduction in the number of militants and a setback in territorial expansion thanks to the coalition that was formed to counteract the advance of the Islamic State in the Middle East.

The current scenario of that terrorist group is of constant political-military coups and setbacks, reducing to the maximum its maneuverability due to the strategic ignorance of the rules, according to Abrahms, the most common mistake of those groups is to involve civilians as their objectives of attacks, in other words, terrorism directed at civilians obstructs victory and truncates public sympathy for its causes. The likelihood that a group will reach power while citizens are the target of their actions tends to be reduced because their actions will be grounds for crusades of established governments.

Despite the rules and the parameterization that the author makes about terrorist and rebel groups such as the Islamic State, Al Qaeda, Fatah, Hamas, Hezbollah, the PKK, the IRA, and the African National Congress, his investigation may extend to terrorism in Latin America and especially in countries like Colombia. It would be interesting for future works not only of Professor Abrahms but for the academia in general, that could be crossed the variables and methodologies proposed in his book for armed actors in Latin America such as the National Liberation Army (ELN) of Colombia, the Path Luminous in the region of VRAEM in Peru and on spin-offs or derivatives of demobilized groups linked to violence such as the case of the dissidence of the Revolutionary Armed Forces of Colombia (FARC), among others. A more robust research proposal can be very useful for decision-makers and security and justice operators in the States to have clear tools for eventual negotiation and prospective processes in the prevention of more asymmetric and irregular conflicts. Although the nature of terrorist and rebel groups is different and depends on geographical, idiosyncratic, religious, historical, political, social, economic and ancestral claims for some, it would be worthwhile to make the methodological and theoretical comparison of Rules for the rebels: the science of victory in militant history to reach a novel approach to the problems of the neighborhood.

Could these rules raised by Abrahms be compatible with the idea and will of the terrorist and rebel groups of negotiated solutions and peace processes? How can we understand that in the cases of Ernesto Guevara and Fidel Castro they took power in Cuba as well as the Sandinistas in Nicaragua, while the FARC, the ELN and the Shining Path in Colombia and Peru respectively did not make it? Undoubtedly, the book is a must read that motivates to deepen the complex analysis of studies on terrorism.

Without a doubt, it is a bit to try to explain in a scientific way the nature of the decisions within the terrorist groups. Upon entering the pages of the book, the reader is able to perceive that there is a hidden and subterranean regime in the functioning of groups, networks, and individuals of terrorism.

The author's ideas become important inputs for complex knowledge, articulated and lucid in the proposal to analyze the behavior of terrorist leaders. Apparently, the book's academic commitment results in identifying patterns of leadership, management behavior and unique natures in hundreds of terrorist groups throughout the world. In this way, the international conjuncture becomes the field of analysis in which Abrahms' thesis takes on a greater meaning.

The lone wolves, the extremist factions of identified groups, the network configuration of other terrorist actors, are sufficient material to verify that those individuals follow rules and regulations; those must be focused on science for victory. Although it seems paradoxical, the rebels must follow instructions to fight against the systems they want to finish. That is, if they want to succeed terrorist groups must follow some rules against those who fight constantly, to affirm the above, the author uses the convergence of different sciences and disciplines to corroborate their hypothesis, those coincide in political science, criminology, economics, psychology, administration, sociology, communication, marketing, international relations, and polemology.

In other words, the book is a research product that serves to understand the rebel and terrorist phenomenon from an alternative perspective. Indeed, one of the great problems for security operators in the fight against terrorism is that they have not achieved the assimilation of the phenomenon and seek to decipher their actions from a rigid and state-centered perspective. Max Abrahms invites us to reflect on different issues and warns that until we understand how groups, rebels and terrorist leaders work, there will be no effective strategy to successfully fight terrorism.

César Niño is a Professor of Political Science and International Relations and Coordinator of the Security and Democracy Center at the Sergio Arboleda University in Colombia. He has been an advisor to the Colombian Army and the author of several articles and books on security and terrorism.