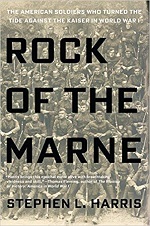 Historian and author, Stephen L. Harris, has written the definitive history of shared combat experience of the 3rd Infantry Division and the soldiers who fought in the Second Battle of the Marne in 1918. The American involvement in the First World War was minor compared to the French and British commitment. Yet, the American combat experience was equally demanding on the soldiers. Rock of the Marne detailed the recollection of the weeks and day leading into the Second Battle of the Marne. Stephen L. Harris has gone to great lengths to tell the story of the 3rd Infantry Division. He gave minute by minute details from artillery shell to shell hole to the riverbanks of the Marne river. Stephen L. Harris’s main argument of the book was how the 3rd Infantry Division earned the name the rock of the Marne. The general reader will find Harris’s book filled with detailed descriptions of combat.  The mud and blood on the banks of the Marne river with a constant thunder of artillery bombardment will leave the reader feeling they were in the middle of the battle themselves.

Rock of the Marne centered around the 3rd Infantry Division from 29 May 1918 to 24 July 1918 under the command of General Joseph T. Dickman. Harris’s attention to detail does not fail him on geographic descriptions and locations of the Marne river and small villages such as Crezancy, Connigis, Mezy, Moulins and Paroy.  Personal recollections from the 30th and 38th Infantry Regiment filled the body of the book. Harris tried to tell the reader a little background on each solider that was discussed, such as college or occupation. First-Lieutenant George P. Hays was one such solider. Hays was the only solider to be award the Congressional Medal of Honor in the 3rd Infantry Division. Hays used horses to maintain liaison between headquarters and the artillery batteries. During that time, Hays had no less than seven horses shot out underneath him.

Harris argued his main point empirically.  Harris gathered articles, books, newspaper clippings and personal letters from and about the soldiers of the 30th and 38th Infantry Regiment of the 3rd Infantry Divisions as he could find.  Based on Harris’s observation of the material, he introduced the shared experience of combat during the Second Battle of The Marne. Also, Harris definitively placed the 38th Infantry Regiment, under the command of Colonel Ulysses Grant McAlexander, as the regiment that held the Germans at the river banks of the Marne river.

Harris’s book added a missing account of the Second Battle of the Marne, such as soldiers’ personal experiences, from the existing literature. Doctor Michael S. Neiberg has written the most complete account of the Second Battle of The Marne that includes the French perspective. Doctor Jonathan Boff included the much-needed German perspective in his book Haig’s Enemy. Readers who wish to dive deeper into the literature will find the work of Jennings Cropper Wise, The Turn of the Tide, useful because he wrote about his own experience as a veteran of the battle.

Harris wrote from the point of view of the soldiers and used their diaries and letter to constructs a narrative that walks the reader through the battle step-by-step.  Harris maintained a neutral balance between Colonel Edmund L. Butts, the 30th Infantry Regiment commander, and Colonel McAlexander of the 38th Infantry Regiment. Harris’s book has more detail than might be needed because he took the time to develop each solider that was introduced. He did not begin discussing the battle till about halfway through the book.  This may frustrate some readers.

The running theme of the book was the combat experience of the soldiers of the 3rd Infantry Division. However, the book has a few gems that readers might find educational. Harris did a good job throughout the book discussing German air power. Most American readers might not know that Germany had a slight superiority over the skies.  This caused frustration for the soldiers on the ground. Another topic that Harris discussed was the foreign language proficiency among the American soldiers. Foreign language proficiency among the troops is an under-researched area. Harris discussed this a few times through the book.  There were, however, some topics that Harris did not cover adequately. The Germans’ point of view of the actions that were occurring were glazed over. The same can be said about the French perspective. This book was written almost completely from the Americans’ point of view.

While Harris has written an easy to understand narrative of the battle, He chose not use footnotes nor endnotes. Thus, frustrating any academic researchers or reader to follow on Harris’s research. Harris does have a rich bibliography, which includes The Marne Source Book. The Marne Source Book is an excellent source for material on the battle of the Marne. Also, the bibliography included the unpublished diary of Ulysses Grant McAlexander, found only at Oregon State University. Clearly, Harris has consulted a wide variety of sources. The choices to not have footnotes or endnotes weakens the academic structure of the book.

In conclusion, Harris has written a very detailed account of combat experience of the 3rd Infantry Division. The general reader with some background information on the First World War will find value in this detail rich unit history of the 3rd Infantry Division. Students of military history or professional military educators will find value in Harris’s book from the soldiers’ experience of combat. Harris wrote at great lengths to humanize the soldiers and the demands of combat. The best way to describe Harris’s book was from a passage written by Captain George Herlihy from H Company as he describes hand to hand combat on the morning of 15 July 1918. He states ‘A German solider rushing long thrust at Minnis with his saw tooth bayonet the solider parried right, knocked the German’s rifle out of his hand with a butt stroke; made a diagonal cut down to the neck, knocked the doomed fellow’s head off because he had already been decapitating. Blood spurted like a fountain’.[i] The combat experience of the Second Battle of the Marne was as brutal as war can produce. The combat demand on soldiers from the 3rd Infantry Division illuminated the human totality of war.

-Wise, Jennings C. The Turn of the Tide: American Operations at Cantigny, Chateau Thierry, and the Second Battle of the Marne. New York: Henry Holt and Company, 1920.

To my mind, this review is…

To my mind, this review is good and describes the main items of this book. I write reviews for https://freebooksummary.com/category/the-silence-of-the-lambs resource, where everyone can find some interesting character analyses, interesting facts, and so on. I know that such kind of writing isn't easy, and I appreciate the author's work. It's necessary to convey the core meaning of the story to the reader, and it requires a lot of skills.