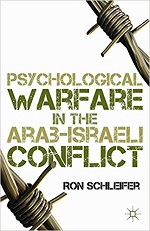 Psychological Warfare in the Arab-Israeli Conflict. By Ron Schleifer.

PSYWAR--what is it good for?  While not publicized, Psychological Warfare, the most potent weapon leveraged by both sides in the 1947 to present Arab-Israeli conflict, finally gets the attention it deserves.  Author and researcher Ron Schleifer offers a play-by-play analysis highlighting the successes and failures at each milestone of this fight, and does so at a pace in which the time-strapped reader can digest with deep understanding.

Shleifer starts with the three principles of psychological warfare: the target audience, the message, and the means of delivery, which are important as he continues to reference them as he dissects each phase.  From there, he chronologically reviews the historical milestones beginning with pre-state Israel’s exploitation of media to influence international opinion against the British Government’s enforcement of their Palestine anti-immigration policy following World War II.  Surprisingly, and only because there isn’t much to report, he makes a quick touch-and-go on the Arab-Israeli Wars from 1948-1982 before landing in the unprecedented PSYWAR conducted by Hezbollah against Israel in southern Lebanon.  Schleifer ends with the Second Intifada of the Palestinians waged in the early 2000s.  The Israelis, slow to adopt that war’s lessons, were completely out-matched by the Palestinians in the use of the internet and exploitation of foreign news media.  Finally, he offers two vignettes: The 2008 Israeli PSYWAR Operation “Cast Lead,” which shed a light on the inadequacy of their psychological operations; and the 2010 Mavi Marmara Affair which provides striking similarities to the British anti-immigration enforcement half a century earlier.

Schleifer is a senior lecturer at Ariel University in Israel and the Head of the Ariel Research Center for Defense and Communications.  He has spent twenty-five years researching and writing about psychological warfare in the Arab-Israeli conflict.  One would expect that he would take a partisan position regarding his own country, yet he is repeatedly critical of Israel’s actions, or lack thereof.  Never failing to look at an event from all sides, he thoroughly evaluates the performance of Israeli and Arab political-military organizations, points out successes and failures in strategy and execution, and frankly describes what could have been done to be more effective.

The sequential style and analytical structure of the book allows any reader to readily follow the timeline of events and the progress of the psychological warfare campaigns.  The book provides a superb illustration of the power of a well-orchestrated PSYWAR campaign conducted in tandem with military action.  Given the significance of this perpetual hostility and its consequences that reverberate throughout the region, it is easy for the reader to become absorbed in the details and find value in the lessons presented.  Schleifer repeatedly demonstrates how a militarily inferior force--first, the Israelis, then, the Palestinians--was able to turn a tactical loss into a strategic success through the deliberate execution of a psychological warfare.  Additionally, he shows how the Israelis, once adept at influence operations against the British, later fall short of understanding its impact and have paid the price for their ignorance.

Psychological Warfare in the Arab-Israeli Conflict is a valuable history lesson useful for both strategic analyst and the battlefield planner alike.  It offers insight into the background of the decades-long wars and sheds light on the nature of the continued geopolitical struggles of the Middle East.  Above all, any military professional who takes up this book will understand what PSYWAR is good for.

Major Joseph Davis is a CV-22 Osprey pilot in U.S. Air Force Special Operations Command.  He has been on combat deployments to Qatar, Djibouti, and Iraq.  Major Davis has a M.A. in Homeland Security from American Military University and is currently a candidate for a M.S. degree in Defense Analysis at the Naval Postgraduate School.