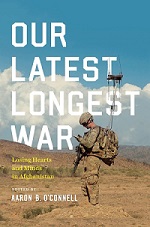 In Afghanistan Americans seemed determined to validate F. Scott Fitzgerald's aphorism that American lives have no second act. Fitzgerald didn't mean we don't get second chances (Afghanistan policy has had plenty) but that Americans are determined to avoid the hard choices, struggle, and dissonance that makes the second act of so many plays rewarding. Instead, we want to skip to act three's resolution. Consequently, we have tactically and strategically re-lived basic decisions about Afghanistan multiple times since 2001, each time re-learning obvious lessons and re-resolving to avoid the same mistakes while pledging to essentially do more of the same. We have failed to even ask the basic question of “If we weren’t there as we are, would be still be?”

Given the President’s recent speech on Afghanistan the timely release of Our Latest Longest War is a welcome addition to Afghanistan literature. A collection of essays edited by Marine Lieutenant Colonel and Annapolis history professor Aaron O’Connell, Our Latest Longest War sets out a simple, but effective thesis: that American and NATO efforts, no matter how well-intentioned, were doomed to failure due massive cultural ignorance, both implicit and explicit, in Western forces. The essays focus on the official war period from the initial 2001 invasion to the closure of ISAF in 2014 with essayists ranging from former Ambassador Neumann to officers involved with the development of the Afghan legal system and Army.

O'Connell leads the book with a scathing critique of the American and NATO strategic/operational planning. According to him, a combination of arrogance, hubris, and idealism lead the Western world to grossly overestimate the challenges inherent in post-Taliban Afghanistan and under deliver on a variety of efforts. O'Connell demonstrates that while the Bush Administration did lose focus on Afghanistan as a result of the Iraqi Invasion, this was not the proximate cause of strategic failure. A lead-nation construct in which Germany performed police development, Americans conducted counter-terrorism raids, and Italy led judicial reforms was wholly impractical in Afghanistan.

It turns out feudal, Islamist, tribal Afghanistan was not well-suited to a centralized Western parliamentary system. Moreover, the liberal norms of Western states, where the rights of minorities, individual freedom, and equality under the law are fundamental precepts, they simply do not exist in Afghanistan (as well as much of the world). For example, the 2004 Afghan Constitution, simultaneously declares “The sacred religion of Islam is the religion of the Islamic Republic of Afghanistan. Followers of other faiths shall be free within the bounds of law in the exercise and performance of their religious rituals” and “No law shall contravene the tenets and provisions of the holy religion of Islam in Afghanistan.” To a Westerner—who, even if religious, holds that government should be secular in application—this is not a major contradiction; but to an Afghan, this simply means Islam, with its restrictions toward other faiths will undoubtedly take primacy. This massive failure to appreciate cultural friction in Afghanistan and the West’s insistence on forcing Western solutions to Afghan problems, resulted in precious time being lost between 2001 and 2005.

More than simply resistance to outsiders, the cultural heritage of Afghanistan is fundamentally unsuited to the civilizing veneer Westerners take for granted.  Marine Captain Aaron MacLean demonstrates this in his excellent “Liberalism Does Its Thing.” MacLean was an infantry platoon leader during Operation Moshtarak, the invasion of Marjah in Helmand Province. He explains in detail that coalition forces were indeed able to clear ground, the "government in a box" promised by ISAF Commander GEN Stanley McCrystal never materialized because centralized, federal administration doesn't work in Afghanistan. MacLean argues that Westerners go abroad ignorant about their own heritage; we may have better values (in our view) and systems than the Afghans, but they are predicated on the same brute force seen in the third-world. We just have the veneer of civilization, tempered over the past 600 years since the beginning of the modern era. In fact, the horror of the Thirty Years War goes beyond much of the intra-Islamic violence seen today. In short, we have modern systems earned and developed through violence, but forget about the struggle (and violence) that got us here.

The only dissenting essay comes from Lt CDR Daniel R. Green, a Navy Special Forces officer. In “Organizing Like the Enemy” he documents the success had by embedded SF teams that had limited goals and placed Afghan concerns at the forefront of operational planning. All of these efforts were enabled by extensive cultural and language training. However, the success of SF teams may actually be the exception that proves the rule; if culture is, as O'Connell argues, critical to operations, then we should be dismayed that only a small portion of the coalition internalized and applied this knowledge. Since these successes were not replicated at scale, we should need Our Latest Longest War's guidance about the utility of force in transforming cultures.

In more ways than one Our Latest Longest War mirrors the seminal 1973 RAND Study “Bureaucracy Does Its Thing." That study concluded that the institutions of the US Government and military failed to implement sound, collaborative, and deliberative policies in Vietnam. Each service or agency pursued actions in line with institutional prerogatives: the Army conducted Search and Destroy because it allowed a firepower-focused service to utilize firepower and control the tempo (but not results) of battles; the Air Force bombed North Vietnam because its weapons and doctrine told it to; the State Department did not focus on the development of an effective South Vietnamese Government but rather the relationship of that government to other South Asian states. In short, institutional constraints, both known and unknown, coerced the American government into operational methodologies wholly consistent with individual agency doctrine, but wholly out of place and unadjusted for reality that existed in South Vietnam, especially after the (American-supported) assassination of Prime Minister Diem.

Our Latest Longest War is not a book for optimists. Even with multiple strategic reviews and presidential administrations, our failure to take stock of fundamentally (flawed) assumptions about Afghanistan should give pause to all. The rosy projections and hubris of 16 years of “we are on the verge of winning” are stripped away in favor of intelligent cultural, historical, and strategic analysis predicated on a simple premise: that culture is of paramount importance.

John Bolton is the Deputy G3 for Train Advise Assist Command-East (4/25 IBCT (A)). He is a graduate of the Command and General Staff College’s Art of War Scholars Program and holds degrees from West Point and American Military University. His assignments include 1st Engineer Battalion and 1-1 Attack Reconnaissance Battalion with deployments to Iraq and Afghanistan. The views presented here are his alone and not representative of the U.S. Army, the Defense Department, or the U.S. government.