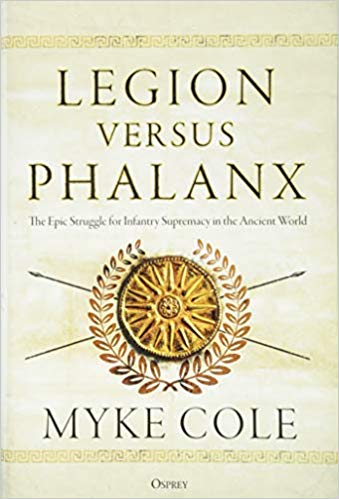 Myke Cole has written a new book covering ancient Hellenistic phalanx and Roman legion warriors. The author’s work focused on Hellenistic and Roman military unit formations with a tactical analysis. Cole’s work spans a time period from approximately the 3rd through the 2nd century BC battlefields with a discipline focus. Cole’s main argument focuses on the tactical success and failure of the phalanx and legion military units. Cole re-created the experience of battles down to the material components of the weapons and armor that both military units would have deployed.  Cole’s position was on the Roman legion as the best military unit formation that was more adaptive at combat than the Hellenistic phalanx unit.

Readers who enjoyed military historian John Keegen’s work The Face of Battle, will feel right at home with Myke Cole’s book, Legion Versus Phalanx. Similar to John Keegen, Cole’s writing has the ability to engage readers on a multitude of topics. Their dramatic writing style had the ability to draw the reader in and want to continue reading.

The author questions which military unit would win in a battle: legions or phalanx? Cole presents sound academic, factual arguments for Roman legions as the more adaptable military formation.  The author’s main points in favor of the Roman legion was agility, flexibility and adaptability; whereas, the phalanx had only one-dimensional movement.[i] A one trick horse if you will. Further examination of these main points concerning ancient military unit tactical formations will clarify Cole’s argument.

Factors that contributed to agility were the topography of the battlefield and climate conditions. A Hellenistic phalanx unit fights best on flat topography. The Roman legion did not require a smooth, flat surface for quick movement.  Their loose formation was conducive to any type of topographical obstacles. However, they would be disadvantaged down hill as any opponent would be. Rain reduced visibility and fog would hinder the phalanx more due to their requirement to utilize close formation. Soldiers in the back of the phalanx formation had a reduced visibility than a soldier in the front due to heavy rain.  This reduced visibility could be the same for the legions as well; however, it would be more tactically detrimental to the phalanx due to the tight unit cohesion requirements and one-dimensional movement. An example found in Cole’s work was the battle of Cynoscephalae in 197 B.C.  In this battle, Roman victory was aided by topography and fog.

The author has used the broadest possible range of primary sources concerning Hellenistic and Roman warriors. The availability of primary sources is limited due to the amount of time that has passed. Reading all of the available sources is a goal that was achievable with serious dedication. Cole’s bibliography and research contains an immense number of these primary sources such as Thucydides’s The History of the Peloponnesian War.

Cole’s work provides the reader with a small glimpse into Roman foreign policy and ancient cultural religious ideas on a micro level. This book’s main focus was on military unit formation tactics. It was curious to note that Cole did not reference Paul Cartledge’s work, Spartans, as a secondary source with the amount of times he referenced Spartans in his work. Cole utilized J.E. Lendon’s work, Soldiers & Ghosts, as a secondary source.  Lendon’s work is academically denser yet does not present the same accessibility as Cole’s work.

Cole’s blunt manner on academic debate was very refreshing and welcoming. The reader knows exactly which position Cole stands on any given argument. The author also presented the reader with different academic interpretation. This was a strength of clarity that any level of reader will find easy to follow in Cole’s book. An example of this can be found on the debate over the use of the name pezhetairos. Cole informs the reader that this translates into ‘Foot Companions’.  Whether a special unit within the Macedonian phalanx received this designation or if the entire formation were called ‘Foot Companions’ has been debated among ancient military historians. Cole clearly stated which side of the debate fits his argument.

Overall, Cole’s work was framed with immense detail. An example of the attention to detail was found in the classification of the phalanx units. The smallest unit was a Lochos, which was a file of 15 soldiers with an additional solider in a leadership position, called Lochagos, making 16 in total.[v] Four Lochoi makes up a Tetrarchia which is 64 soldiers.[vi]  Cole continues with unit numbers and designations. This would serve as an excellent reference. Another gem of this work was when Cole’s real-world military experience intersected with academic debate. The Roman Centurion position has been the center of many debates. Was the Centurion equal to a modern Noncommissioned officer (NCO) or was this solider closer to a Captain in the US Army. Cole stated that the Roman Centurion had a ‘span-of-control’ of 60-100 soldiers. The Centurion was closer to a Captain then an NCO. On this point, Cole delivered critical analysis of the primary material coupled with real world experience to drive an engaging possibility.

Each of the set piece battles Cole presented were depicted from both sides in an unbiased argument. However, the Battle at Magnesia had the action of a major Hollywood movie, second only to Ridley Scott’s Gladiator. Cole’s description of the battle included camels with mounted archers, Scythed chariots and war elephants.[vii] Serving in a minor role on both sides of the battle was Publius Cornelius Scipio Africanus, the conquer of Carthage. Serving under the Seleucid King was none other than Hannibal Barca of Carthage, the military genius behind the victory at the battle of Cannae (216 BC). Some sources stated Hannibal crushed as many as 50,000 Romans.[viii] While none of the prime sources stated either of these generals meet on the battle field of Magnesia, the sources do tell us they were both present in their camps.

Overall, this reviewer found Cole’s work engaging. Bold and refreshing statements are found throughout the book, which maintains consistent engagement. Cole also provided the reader with maps of each battle in the front of the book, colored pictures in the middle and a detail glossary of terminology at the end of the book. The color pictures in the middle of the book are very high quality. There are times throughout Cole’s book that his unique writers voice was a distraction from the flow of the passage due to his pop culture references.

Cole has marched head on into the ancient military history world. His goal of writing about ancient military unit tactics accomplishes its set goals. Cole’s book will resonate with strategic and tactical gaming theorist and any reader who has a curiosity of ancient military historical topics. Myke Cole has managed to turn his hobby into his vocation. This is an engrossing book to read and will engage with readers who are new to Hellenistic and Roman unit combat tactics.

Thucydides. The History of the Peloponnesian War. Barnes and Noble Classics, New York. (2006)