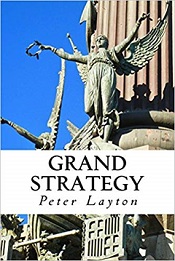 As the strategists, policy makers, academicians and many more are confused about the meaning and understandings of grand strategy, the book offers a concise solution to the problem, presenting a shift from traditional thinking, the book offers grand strategy to be a methodology of purposefully shaping tomorrow (p.2).

To elucidate a better understanding of the concept, the book traces the evolution and development of the idea of grand strategy in the second chapter. By offering a brief comparison with strategy, the books lays that grand strategy has more expansive scope, requires use of diversified means (e.g., economic, military, diplomatic, informational etc.), and considers developing the necessary means over time. The books briefly discusses a few commonly held misconceptions about grand strategy and emphasizes on grand strategic synthesis (p.26), the importance of integrating ends, means and especially ways for successful grand strategy formulation. The book reminds the readers that grand strategy has a life cycle. The second chapter also provides a distinct definition, “grand strategy is the art of developing and applying diverse forms of power in an effective and efficient way to try to purposefully change the order existing between two or more intelligent and adaptive entities” (p.35).

The third chapter discusses about applying and building power and offers three types of grand strategies: Denial, Engagement, and Reform. The chapter provides the theoretical foundation associating the three grand strategies of denial, engagement, and reform respectively with IR mainstream theories of realism, liberalism and constructivism.

The book contributes to the conceptual development and understanding of the idea of grand strategy. Making grand strategy practically applicable remains one of the major contributions of the book. However, in trying to assist busy people to get practical benefit, the book simplified grand strategy as ‘problem solving method’ but all the objectives sought need not necessarily be problems. Moreover a little more attention and explanation on the ‘expansive goal’ would enrich the book since that is the fundamental reason which necessitated the creation of grand strategy.

Sarwar J. Minar is the Senior Officer, International Programs and Relations, Independent University, Bangladesh (IUB) and Founder, Center for Grand Strategy Studies – a single issue think tank. He may be reached at sarwar.minar@gmail.com