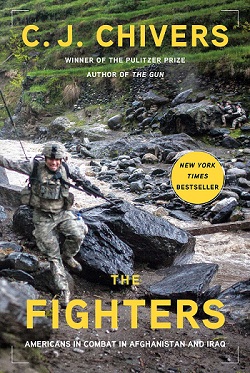 “Soon Marines were hustling across the field, crossing the open space where a gunfight had raged for hours.  When they entered they found one more survivor – a young woman lying in a pool of blood. She was calling out children’s names.  The blasts had severed both her legs and one of her arms.”  From page one of C.J Chivers’s new book The Fighters the reader is punched in the gut with the reality of war.  It is not a story for the faint of heart.

C.J. Chivers, a Pulitzer Prize winning journalist, follows six people in their journey through the conflicts in Iraq and Afghanistan.  From Layne McDowell a Navy fighter pilot who is high above the war struggling with the morality of dropping bombs on targets that might have civilians present, to Leo Kryszewski a Special Forces soldier who must deal with an attack that he’s not prepared for, to Mike Slebodnik an Army aviator in Afghanistan who always had to be in control of the aircraft, to Robert Soto an aspiring actor turned radioman in one of the most dangerous areas of Afghanistan, to Jarrod Neff an intelligence officer turned infantry platoon leader in Marja, to Navy Corpsman Dustin Kirby who is in the thick of battle and is the closest thing to a main character as this book gets, Mr. Chivers brings to life the stories of ordinary Soldiers, Sailors, and Marines through prose that reads like a novel.  He focuses on the lives of ordinary people who are in the thick of battle. Except for a brief encounter with President George W. Bush in the last chapter, no senior leader or official is present.

In an interview with the author that accompanied the review copy of this book, Mr. Chivers explains that he chose these characters to provide the reader with a group of people that were linked together by the wars but had very different experiences.  Mr. Chivers said, “I had a clear intention: As readers moved from one character to the next, I wanted them to be carried forward through different phases, periods and places, and see many of the common types of modern American combat service since 2001.”

For the most part Mr. Chivers achieves this goal.  He does, however, leave out several key groups, not the least of which is the entirety of the Air Force.  While two of the people in the book are pilots neither are in the Air Force.  If he wanted to prevent redundant story lines with the Naval aviator already in the book, Mr. Chivers could have focused on Air Force drone pilots.  Arguably as iconic as the Jeep, Huey, and HMMWV of past wars, drones and those that operate them are noticeably absent from any of the story lines.  Another demographic left out that played an important role in the wars in Iraq and Afghanistan is the advisor.  Whether it be in the form of a Military Transition Team (MiTT), an Advise and Assist Brigade (AAB) or the new Security Force Assistance Brigades (SFAB) no mention of what many senior leaders referred to as the main effort of the wars is made in the book.

This is not a book on the strategy of war.  Other than the brief introductions before each chapter to provide context, what conflict you are in is irrelevant to the individual stories. Other than the seemingly obsessive focus on the excruciating details of the civilian casualties observed by those in each story, details that at times can be truly hard to read, (Avoid the HIMARS incident in Marja Afghanistan if you don’t want to know what happens to a family who’s house is accidentally hit by a large in-direct fire rocket.) the author fights the urge to provide commentary on whether or not it was right to be in Iraq or if the United States should still be in Afghanistan.  This lack of polarizing commentary allows the reader to focus on the human tolls of combat and how it effects the individual.

What this book is about is loss.  It’s the one thing that ties all the stories together.  Each individual Mr. Chivers focuses on loses something.  Some lose their motivation to continue, some lose friends, one makes the ultimate sacrifice losing it all.  Mr. Chivers’s descriptions of that loss brings to life the hardships and sacrifices that were made daily.  Mr. Chivers doesn’t just talk about the loss and move on, he humanizes the struggle to cope.  He brings you back home to see the effect of that loss on family and friends.  These powerful stories show how, for some, the war doesn’t end when the service member comes home.

Ultimately this book does an outstanding job of putting into focus the stories of ordinary people thrust into the hardship of war.  These stories are just as important to understand as how a strategy for a battle came about or the decisions a senior leader made during that battle.  This is war at its grittiest.

Lieutenant Colonel James King is a US Army Intelligence Officer.  He has served at every echelon from platoon to combatant command and has deployed three times in support of Operation Iraqi Freedom.  He has written several articles for Small Wars Journal on a wide range of subjects.  Lieutenant Colonel King holds a bachelor of arts in sociology from the University of Washington and a master’s degree in strategic intelligence from American Military University.