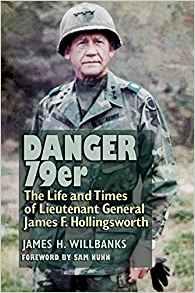 Holly attributes his successful initial steps “in the art of soldiering” to “five great professors” – as is often the case: non-commissioned officers who broke him in.

My earliest, though vague, musing of General James F. Hollingsworth was as a young teenager with my father (who had been in the U.S. Army since WWII) making comments about Army units and personalities. I remember his comment about the general’s character and willingness to fight. (It may have been taken from the fact that the general also served with the 2nd Armored - the “Hell on Wheels” – Division in WWII, but it was Hollingworth’s personal nom de plume to many, as well.)

Some things might surprise the reader who might not be familiar with Holly. For instance, his bite matched his bark. He felt fortunate to have been the assistant division commander of the 1st Infantry Division under MG William E. DePuy in Vietnam. Both generals thought along the same lines and, as a result, five battalion commanders and a brigade commander were relieved during one 4-month period alone for not having “what it takes, and men’s lives were at stake.” Holly and DePuy also turned away 14 generals who wanted to be assigned to the Big Red One.

Other combat applications that caused some degree of hesitation by the chain was applying the “Kill ‘em, kill ‘em fast” and “Don’t be short with firepower” maxims. “Waste ordinance, not American lives” also became an unofficial motto of the Big Red One.

Since Tomalin’s article, “The General Goes Zapping Charlie Cong” in 1966, General Hollingsworth was often a special target for the press. This included two tours in Vietnam. This meant that Holly’s superiors were often upset with any press reports in which he was mentioned, though the troops always appreciated his honesty in telling it like it was.

General Hollingsworth also encountered some of the anti-war garbage while at Ft. Jackson after his first Vietnam tour. The G.I.’s United Against the War in Vietnam held an on-base meeting in 1969. Later, five soldiers (that Holly described as “Socialist Worker Party types”) were arrested in one of the basic training brigades for sowing dissent, calling for revolution, and speaking against the war. They were immediately jailed. The ACLU and the New York Times protested the closed court that Holly mandated in a formal complaint to the SecDef. Political persuasion didn’t work and all were given undesirable or dishonorable discharges. The defendants sued and lost in federal court. Holly was quoted, “I’ll take action against anybody that I am convinced is working against the interests of the United States Government, because that’s the oath I took – to defend our country against all enemies, foreign and domestic. That’s what I understood at the time, and that’s exactly what I understand today.”

While at Ft. Jackson, Holly “made sure that the training focused on readying the trainees for combat duty in the jungles of Vietnam.” Something I gratefully appreciated a couple of years later.

The general arrived on the same day in Vietnam for his second tour as I arrived for my one and only (but not on the same airplane), exactly a month after my father’s second Vietnam tour ended. Holly had received a phone call from General Abrams to assist him in Vietnam, which he immediately accepted.

Sent north to be the Deputy Commanding General of XXIV Corps, Holly confronted an Army marking time. Most units were continuing to leave Vietnam at a rapid pace, but they still had missions to perform. He found the situation almost unfathomable and a mere shadow of what he had left in 1967. A unit of the 101st that had rusty weapons, an artillery battery so “hopped up on drugs” that he immediately had them stand down were among the things he found and dealt with before General Abrams urgently called once again. This time he was to head south towards Saigon.

Before he left on December 15, 1971 to assume command of the Third Regional Assistance Command, MG Hollingsworth made the rounds to say goodbye to all American units that remained in XXIV Corps.  So, of course, we GI’d the place and stood at parade-rest while the general told us what he would like to personally do to the draft dodgers back home (it was fortunate that the press wasn’t present to hear the general’s remarks to personally castrate them all, which would probably have gotten him into trouble) – everyone’s eyes widened, as we guardedly looked at each other.  This was polished off by one of the most memorable lines I’ve ever personally heard, the general finished with, “I don’t know what your unit does here, but you’re doing a damn good job!”  We had heard that the general styled himself after General Patton, but we weren’t prepared for what he said that day - if one person had made a sound, we would have all collapsed laughing! Which we more or less did when he was out of earshot. A little later, we resumed talking about the general’s farewell and there was a consensus, based on his reputation and the stories about him that when the going got rough, we all would like to have him show up when there was a fight.

General Hollingsworth’s presence and determination to fight the enemy are greatly responsible for saving An Loc and forcing the NVA and VC units to give up their siege. The author does the battle and Holly’s role in it the justice it deserves, made possible by facts and nuances that he shares with the reader because he was there at the time.

Willbanks’ last sentence nicely sums up his book, Hollingsworth’s life and his impact on the U.S. Army. “Holly was a dynamic and colorful individual made for war, and his like will probably never be seen again.”