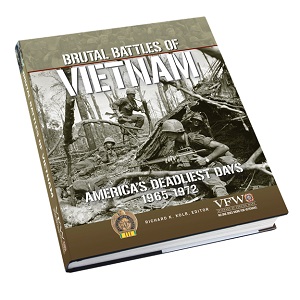 There are few books regarding Vietnam I ever recommend as everyone had a different war and those that weren’t there would never understand.  But I found an exception-Brutal Battles of Vietnam-published by the VFW.  The title belies the quality of the contents and for that diversity, I highly recommend it to both the vet and the casual interest reader.

The Vietnam conflict was 50 years ago.  Yet, we live with its consequences every day.  For those that did not serve, the nature of the war and the effect on its soldiers is unknowable other than in an anecdotal sense.  Brutal Battles, edited by Richard Kolb, provides a path to understanding much better than the dense text of academic histories and analysis.  As in the chronological recount of battles, the lodestone for every participant, each reported event is short, graphic and fully comprehensible. For a large book, it is surprisingly intimate-analogous to what war really is to the participants.

The United States infantry, as a force, fought from 1965 to 1972.  With a rotation every 12 or 13 months, millions of our citizens experienced the war close and on a highly personal basis.  This book provides a rare clarity to that experience. Vietnam, writ large, was an unbroken series of chance and deliberate encounters of brutal consequence to the participants. Those experiences, and the faces and feelings of the experienced, are admirably displayed.  For a graphic visual book, it is unusually personal.

While the “battle is the thing,” to paraphrase Shakespeare, the participants spent endless hours and days recovering from the last encounter and preparing for the next-which always came as did the years of experience-good and bad.  The book admirably fills in the Grunt’s lives between events.  Most often, the time between battles and the camaraderie and shared experiences is of greater meaning as time wears away the edge and polishes the good.

To see the young, eager and mostly smiling faces of our Grunts, is to think that Vietnam was fun in the sun long ago.  But, this book makes it clear it was far more brutal, personal and consequential-issues that we see every day amongst the veterans that populate our hospitals and mental health clinics as well as our innumerable cemeteries. This book is their story.

The book takes the reader through each year of engagement, the rationale for our operations and a review of virtually all the fighting units that participated.  The simple recounting of valor awards for our youth, in a specific combat event, provides a much better understanding as to what really occurred in the names of the countless encounters that still resonate after 50 years-Dak To, Khe Sanh, Hue, Ripcord, A Shau, Hamburger Hill and a hundred others-the repository of the blood of our nation.  For those that were there, Vietnam is highly personalized.  This book makes that point.  The many faces, the many names, the many award narrations provided, put a luster on the experience that belies the ultimate outcome.  The book puts no glory on war but clearly places the grace on those that were there.

Books, per se, are highly selective in their material.  This book has an unusual panoramic recount of what was the experience of Vietnam.  It goes from a new arrived PFC’s views to those of the very senior leadership but arrayed against a specific action at a specific time and place.  It artfully demonstrates the great camaraderie of the deployed as well as the fear, hope and angst of the individuals-a common phalanx of feelings for all who have been seriously shot at. Altogether, the totality of the work and the degree of clarity for the reader is quite striking.

I spent two years in Vietnam, encompassing both Tet in 1968 and Lam Son 719 later.  As a lieutenant and later a captain, my view and appreciation of the war was understandably skewed.  I had no concept of what was going on with other people in other places.  This book fills that void, as I believe it will for others.  For those that were there, this is enlightening.  For those that were not, it is highly educational.  The book does a great National service and should be one of the first books examined by anyone wanting to know what Vietnam was really all about.

Thanks for the review, I'll acquire the book....Chuc Mung Nam Moi.