As the youngest Theater Special Operations Command (TSOC) in the United States Special Operations Command (USSOCOM), SOCNORTH fills a vital capability for our nation and the United States Government (USG). Operating in a complex environment of authorities, resources and threats, SOCNORTH does more with less by cooperating on an enhanced basis with the interagency and law enforcement, as well as partner and allied nations. Three foundational tenants make SOCNORTH’s mission so unique: 1) SOCNORTH is the only TSOC with the specified tasks of homeland defense and defense support to civil authorities, the two main missions of USNORTHCOM. 2) SOCNORTH is the only TSOC with both a domestic and foreign operations area. 3) SOCNORTH’s command is bi-national, capitalizing on the mature relationship between the U.S. and Canada, the SOCNORTH Vice Commander is a CANSOFCOM officer. This article seeks to inform the reader on how SOCNORTH navigates the complexity of providing SOF support to USNORTHCOM by describing the operating environment, the SOCNORTH operational approach and providing a vignette. 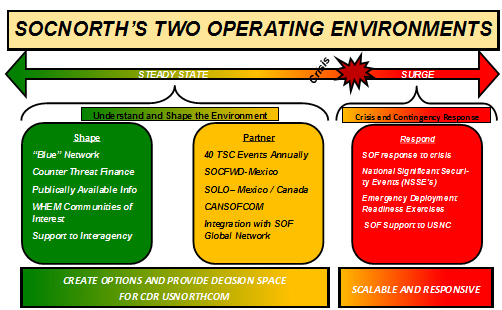 STEADY STATE: During steady state operations, SOCNORTH focuses on shaping our environment through the “Blue Network” and developing capability with our partner nations. The “Blue Network” is a network of analysts that is spread throughout the interagency. This differs from the USSOCOM Special Operations Support Teams (SOST) in that the SOCNORTH “Blue Network” provides support at the tactical and operational level. These analysts assist by providing intelligence support to law enforcement, homeland security and our partner nations. These efforts help populate the intelligence community databases and inform the community of potential threats that lead to a greater common understanding of the operating environment.[3]

SOCNORTH’s partner capability development strategy consists of approximately 40 events on an annual basis that are conducted with partner nation SOF. These are coordinated across the US country teams via our Special Operations Liaison Officers (SOLO) and our Special Operations Command Forward (SOCFWD) Mexico element that works directly out of the US Embassy Mexico City. These events span from the very tactical level to institutional development of staffs and doctrine. The relationships that are built as a result of these events have created an increase in intelligence sharing and partner nation operational tempo. The increased capability that is developed creates greater security across the region. These events are also closely coordinated across GCC boundaries with SOCSOUTH, ensuring that we have a coordinated approach to securing the southern approach.[4]

In addition to Mexico, SOCNORTH is also integrating with the US Embassy Nassau country team to assist our law enforcement and military partners. This approach is resulting in increased situational awareness of trafficking and smuggling routes throughout the northern Caribbean. SOCNORTH’s ability to fuse this intelligence with partner organizations such as Joint Interagency Task Force South is creating a more holistic picture of threats that operate transregionally.

SURGE: For the surge environment, SOCNORTH partners with law enforcement and government agencies to provide DoD support domestically in times of crisis. The SOCNORTH SOCFWD-Crisis Response is a command element built from the SOCNORTH staff that is capable of deploying within four hours to provide Command and Control (C2) of DoD assets and situational awareness to CDR NORTHCOM in times of crisis. Primarily in support of the FBI, the SOCNORTH crisis response team postures itself to rapidly assess the situation, coordinate with lead federal agencies when needed and send valuable updates through the DoD chain of command to assume a proactive response for supporting the interagency. In addition to the domestic portion, SOCNORTH is developing the ability to perform the same function in the foreign areas of the AOR. This will include increased coordination with the Department of State (DoS) and diplomatic facilities to ensure the proper reception, staging and onward integration (RSOI) of DoD support and resources in the event of a crisis.

The steady state and surge environments that SOCNORTH operates in support each other in a symbiotic way. As SOCNORTH shows increased value through crisis response capability domestically, interagency and law enforcement partners have increased their requests for support. This has enabled SOCNORTH to expand the “Blue Network,” partner nation events and increase the contribution to a whole of government response. 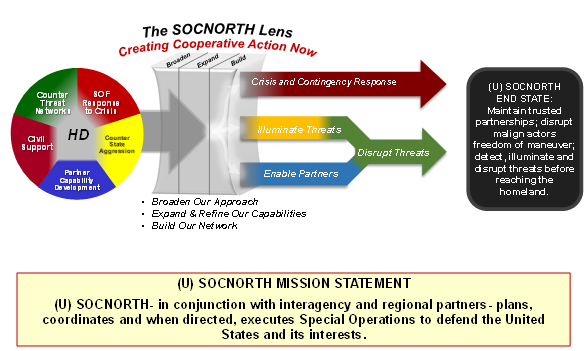 By applying USNORTHCOM’s five mission areas and CDR SOCNORTH’s key tasks of broadening our approach, expanding and refining capabilities and building the network, SOCNORTH creates cooperative action that shapes the lines of effort. Broadening our approach refers to SOCNORTH’s ability to address all current, potential and emergent threats to the homeland to include the irregular threats posed by the DoD challenges.[6] Expand and refine our capabilities refers to building capability across the TSOC to provide USNORTHCOM with a full complement of SOF options. Finally, building our network refers to maturing our existing relationships and identifying opportunities to establish new ones throughout the DoD, interagency and with our partner nations.

The five USNORTHCOM mission sets, coupled with CDR SOCNORTH’s key tasks form SOCNORTH’s two lines of effort: Crisis and contingency response, illuminate threats and enable partners to disrupt threats.  LOE 1: "Crisis and Contingency Response" encompasses our capability to respond to crisis and contingencies in support of USNORTHCOM.  LOE 2: "Illuminate Threats& Enable Partners to Disrupt Threats," a converging LOE, focuses on SOCNORTH's efforts to disrupt threats to the Homeland. Our ability to illuminate threats coupled with our efforts to support and enable our JIIM partners, creates multiple avenues to disrupt threats across the AOR.  It is important to note that SOCNORTH enables an interagency or partner nation “finish”[7] and does not take unilateral DoD action anywhere within the NORTHCOM area of responsibility. SOCNORTH’s ability to respond, married with our ability to illuminate and facilitate threat disruption, ensures the defense of the Homeland through SOF-enabled cooperative action.

SOCNORTH’s mission statement shows the importance that is put on the relationships with interagency and regional partners. Within the USNORTHCOM AOR, DoD plays an important, but supporting role, to our interagency partners. Domestically, SOCNORTH supports our DoJ and interagency partners for the primary mission sets of CT, CWMD and defense support to civil authorities. In the foreign areas, SOCNORTH supports the DoS Integrated Country Strategy for development of our SOF partners to counter transnational organized crime and create defense in depth of the homeland. The SOCNORTH end-state can only be achieved by, with and through our partners. SOCNORTH must seek innovative and increased methods of developing a shared understanding to assist our interagency, allied and partner nations to disrupt threats before they reach the homeland.

VIGNETTE: 2017 was a particularly tough year in the USNORTHCOM AOR with a multitude of natural disasters affecting the continental United States, Puerto Rico and the Caribbean. In response to these disasters, SOCNORTH employed CONUS based SOF as part of the NORTHCOM defense support to civil authorities’ mission set. Providing DoD resources and support to the Federal Emergency Management Agency (FEMA) proved critical to the overall recovery effort. SOF elements filled several critical capability gaps which general purpose forces and interagency elements could not. SOCNORTH employed several Civil Authority Information Support (CAIS) elements who disseminated life-saving and damage mitigation information to local survivors in the affected areas. The storyboard below reflects some of 3rd and 9th Military Information Support Battalions efforts on Puerto Rico after Hurricane Maria. 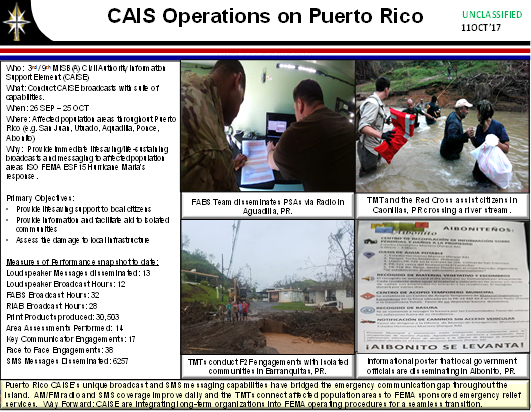 CONCLUSION: SOCNORTH has a unique mission set in support of USNORTHCOM. As the only TSOC with the specified tasks of homeland defense and defense support to civil authorities, both a domestic and foreign operations area and a bi-national command, SOCNORTH operates within a complex environment of authorities and resources. The two SOCNORTH operating environments: steady state and surge, focus SOCNORTH’s readiness priorities through three key areas. 1) The SOCNORTH “Blue Network” seeks to provide increased DoD support to the interagency primarily through analyst support. 2) SOCNORTH’s partner nation activities center on capability development that increases the defense in depth of the homeland. 3) The crisis response capability that has been developed is designed to provide enhanced situational awareness to CDR NORTHCOM and provide DoD support to the lead federal agencies. The SOCNORTH operational approach delineates two primary lines of effort that focus on supporting interagency, partner and allied nations to disrupt threats before they reach the homeland. Using a by, with and through approach, SOCNORTH plays a pivotal role in the integrated approach to the defense of the homeland. SOCNORTH strengthens the US government approach to regional security and bolsters interagency and partner nation efforts through current and future initiatives that seek to disrupt threats throughout the AOR.

[3] Analysts are currently at nine locations worldwide with the intention of expanding to 15 by 2019.

[4] National Security Strategy 18 DEC 2017 outlines priority actions in the political, economic and military spheres to encourage stable, friendly and prosperous states in the Western Hemisphere that will enhance our security and benefit our economy. https://www.whitehouse.gov/wp-content/uploads/2017/12/NSS-Final-12-18-2017-0905.pdf  Accessed on 20 JAN 2018. Pg 52.

LTC Patrick Collins currently serves as the Plans Division Chief for SOCNORTH J5. He is a Special Forces officer with experience throughout the PACOM and CENTCOM areas of responsibility and holds a master's degree from the Naval Postgraduate School in Defense Analysis.