The Sheriff and State Advisor Border Summits were held consecutively on 11-12 and 12-13 September in El Paso, Texas.  They were coordinated by the Federation for American Immigration Reform (FAIR), a non-partisan Washington, DC policy think tank. The training summits were attended by a select group of twenty-five law enforcement and twenty policy professionals drawn from across the United States. Following the pledge of allegiance and the national anthem, Texas greetings were provided by Michael Koerner, Western Director, U.S. Senator Ted Cruz staff.

Subjects covered in the summits were “Recognizing the Border Crisis in Your Jurisdiction,” “Mexican Cartel and Narcocultura Overview for Law Enforcement,” “Deporter in Chief,” “Local Government Cooperation with Federal Immigration Enforcement Efforts,” “State Legislation Trends,” and “Legal and Policy Issues in Homeland Security.” A screening of the film Operation Detour—Recruitment of U.S. Teens and Youth by Cartels was also provided.

Additionally, a tour of the U.S. border across from the town of Praxedis G. Guerrero was facilitated by Sheriff Arvin West, Hudspeth County, Texas. It should be remembered that the local police chief of this small Mexican town—Marisol Valles Garcia—was forced in 2011 to seek asylum in the U.S., along with her family, after four months on the job due to a murder contract being placed on her by one of the Mexican cartels that controls this region of the border. The former police chief, Manuel Castro, had been tortured and beheaded in 2009 (his head ended up being delivered to the police station in an ice chest) with the position then remaining vacant for a year. The police chief after Garcia, Rosario Rosales Ramirez, along with her husband and son were critically wounded by a knife attack by masked men soon after she took the post. 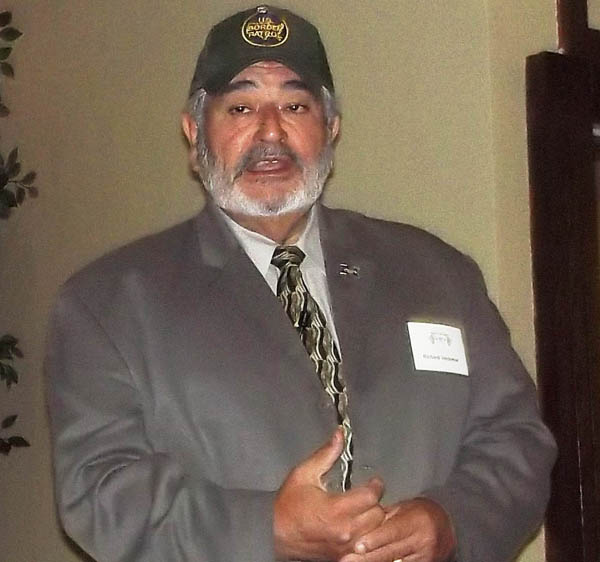 Caption: Sgt. Richard Valdemar, LASD (Ret) speaking at one of the summits in El Paso, Texas.  About 7 miles south of the summits across the border is Ciudad Juarez—not too long ago a heavily contested narco plaza with thousands of homicides making it one of the most dangerous cities in the world. Notable plaza incidents included the 2010 assassinations of U.S. consulate workers and a car bombing in which a Mexican police officer and medical responder were lured to a vehicle in order to be killed in an ambush style attack. 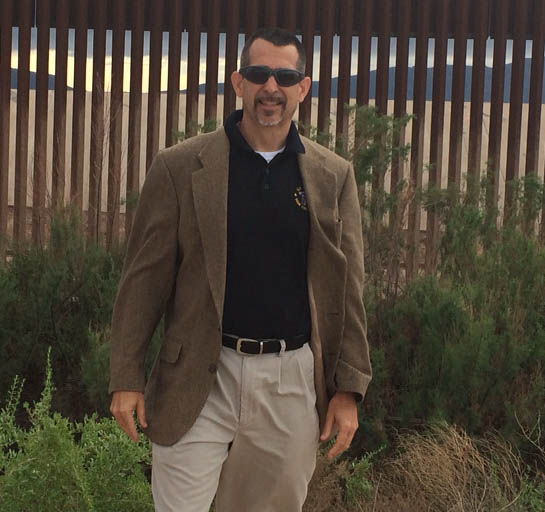 Caption: Dr. Bunker in front of the border fence in Fort Hancock, Texas. Only 4 miles—out of 98 miles—of Hudspeth County, Texas have the newer 16 foot border fence. The rest of the border is protected by four-strand barbed wire. Another issue with the border fence in this county is that, in some instances, it is much farther back from the border and, as a result, has created a situation in which U.S. ranchers are living on the wrong side of the fence in areas known as ‘almost America’. Additionally, the border in this county is not presently patrolled by the Border Patrol—they have been pulled back; instead this mission has fallen to the 14 deputies of the Hudspeth County Sheriff’s Office.

Major themes and points raised in the various presentations were:

• The number of American cities that have the presence of at least one of the seven major Mexican Drug Cartels have more than tripled since 2010, according to the latest Department of Justice (DOJ) figures. That means that the cartels now have command and control networks in every corner of the United States, a fact that at very least should cause concern. The consequences of this, however, raise this concern to a major threat not only to the national security but to society at large.  Young teenagers have become some of the most sought after employees for the cartels. The cartels of today are forward thinking organizations that have, among many other attributes, a military mindset and utilize highly sophisticated tactics. One example stems from the fact that kids today have been born and raised in technology and that makes their inherent talents a remarkably sought after skill in the drug-world.

• Along the southwest border there has been a longstanding debate about the existence of what is known as “spillover violence.”  The argument has been made for years in American border towns but in the last four years “spillover violence” has moved considerably north in the U.S. In fact, the effects of the drug war that in days past were confined to communities such as El Paso and Laredo Texas, are now found also in such far-flung places like Chicago, Philadelphia, and Atlanta.  All across America there is not a single major city whose violent crime stats have not been adversely elevated in frequency and brutality that can be directly tied to Mexican drug cartels.

• It is pretty much recognized that 500 to 600 gang homicides have taken place in Los Angeles yearly (on average) since the 1990s. What is little known is that about the same number of homicides of Mexican nationals (cartel hits) have also been taking place. Often the bodies of these victims tend to disappear so they are considered “off the books” homicides. Also a large number of the kidnappings, drug rip-offs and murders seem to involve Mexican ex-police or ex-military as suspects. Additionally, from 1980-1990, Los Angeles was the kidnapping capital of Mexican nationals and family members in the U.S.—a dubious distinction that later shifted to Phoenix—with cartel kidnappings also now highly evident in Texas.

• Besides the subordination of MS-13 (Mara Salvatrucha) and other Surenos gangs to La Eme (The Mexican Mafia), in Southern California other linkages have emerged with transnational crime and terrorism. La Eme has had close ties with the old Arellano-Felix Organization (Tijuana cartel) and other Mexican cartels—at one point back, in the 1990s, Mexican Mafia and Logan Heights (San Diego) gang members even served as cartel enforcers in Tijuana. Presently, some individual and clique members of the Surenos have ties to the Hezbollah terrorist organization. This is evident with local gang tattoos in Arabic and social media examples such as the ‘Creeper and Wino’ video out of Syria in which they are fighting with AK-47s — ‘LA gangbanging style’—for the Assad regime in a profanity laced video dedicated to their SoCal homies.

• Narcocultura (narco culture) is a challenge to traditional institutions of both Mexico and the United States. It represents a post-modern form of barbarism—a social cancer—that is similar to gang culture, and in some respects has merged with it, which challenges sovereign authority, disenfranchises women, and glorifies violence, illicit drug use, and corruption. Children who grow up in cartel controlled towns and regions readily develop a deviant value system much as Hitler youth did in Germany. They become indoctrinated into the narco lifestyle as they work their way up from halcones (street look outs) to traficantes (traffickers) and sicarios (assassins) as they advance though the cartel ranks.

• Most cartel killings in Mexico are secular in nature. However, enough torture and ritualistic based killings have taken place to raise concerns over the narco variant of Santa Muerte worship and the pseudo Christian cultish beliefs of La Familia Michoacana (The Family Michoacan) and Los Caballeros Templarios (The Knights Templars) promoting a ‘spiritual insurgency’ against Catholicism. The Mexican Army has in the past waged a campaign of destroying Santa Muerte shrines in Northern Mexico and the autodefensas (citizen militias) in Michoacan have destroyed Knights Templar churches and shrines.

• Between 2005-2013, a total of 30,539 illegal alien gang members have been arrested by ICE officers. These gang members predominantly come from the MS-13 (Mara Salvatrucha), Surenos, and 18th Street gangs. 62% of the gang members are Mexican nationals and 23% are foreign nationals from El Salvador, Guatemala, and Honduras. While these were originally Los Angeles based gangs, they have long gone transnational in the Western Hemisphere due to their recruitment efforts.

• Under current policies, ICE officers are severely constricted in enforcing immigration laws, resulting in a significant drop in the removal of illegal immigrants, especially from the interior of the country.  In the last two years, the number of deportations has declined dramatically (including criminal deportations) due to limits on ICE officers and executive actions that shield large categories of illegal aliens from deportation.  One result has been the release of tens of thousands of convicted criminals, including thousands with violent offenses, back into U.S. communities.

• Congress has enacted multiple statutory provisions designed to maximize cooperation between federal, state, and local law enforcement agencies in enforcing immigration laws, for example, 8 U.S.C. §§ 1357(g); 1373; and 1644. Several programs currently facilitate cooperation between DHS and state and local law enforcement agencies. Most of these programs managed by ICE are grouped under the rubric of ICE ACCESS (Agreements of Cooperation in Communities to Enhance Safety and Security).

• Local law enforcement agencies may, without violating the Fourth Amendment to the U.S. Constitution, hold an alien for ICE based on the probable cause determination found in the new I-247 detainer form without judicial approval.

State and local law enforcement officials have the inherent authority to investigate and arrest violators of federal criminal immigration statutes without prior DHS knowledge or approval, as long as they are authorized to enforce federal law in general under state law. Several federal statutes also authorize state and local officers to make immigration-related arrests in certain situations.

For more information on these summits, points-of-contact concerning the presenters, and future planned Border Summits contact Susan Tully at 202-328-7004 or tullys@fairus.org.