Saint Nazario and the Knights Templar: The Narco-Evangelicalism of a Mexican Drug Cartel

Saint Nazario and the Knights Templar: The Narco-Evangelicalism of a Mexican Drug Cartel 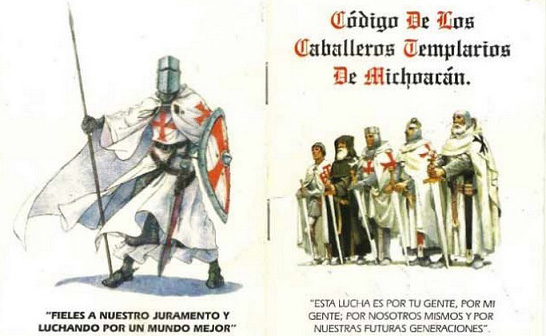 Code of the Knights Templar of Michoacán

Note: This essay has been written specifically for Small Wars Journal—El Centro as part of an ongoing Los Caballeros Templarios de Michoacán research project that will be published as a future eBook.

The ongoing drug war in Mexico reveals that the lethal mix of religion and terrorism isn’t peculiar to the Middle East. Mexico is home to the world’s second largest Catholic population and third largest Christian one, behind only the U.S. and Brazil. Just as ISIS and Al Qaeda terrorize the Middle East and beyond in the name of Islam, certain drug cartels have appropriated folk saints and in the case of the Knights Templars (Caballeros Templarios) even created their own. Folk saints, such as Santa Muerte (Saint Death) and Jesus Malverde, and even Catholic ones, such as St. Jude play an integral role in protecting, motivating, consoling and steeling numerous narcos for battle against their rivals and law enforcement.

El Chapo Guzman, the imprisoned capo of the Sinaloa cartel, is a devotee of his fellow Sinaloan, Jesus Malverde, while Arturo Beltran Leyva (aka “La Muerte”), who led the Beltran Leyva cartel until he was killed by Mexican marines, was devoted to Santa Muerte. Whereas rival cartels invoke the saints for both protection and harm to others, the Knights Templar of Michoacán took a big step further in developing a peculiar messianic ideology that blended Old Testament principles salient in Evangelical Protestantism, folk Catholicism, and a medieval European code of chivalry based on the original Knights Templar who protected Christian pilgrims to Jerusalem and did battle against Muslims for control of the Holy Land.

The Code of the Knights Templar of Michoacán comprises several Christian precepts that are designed to make cartel members feel they serving a larger purpose than the cultivation, manufacture, and sale of drugs, primarily methamphetamine and marijuana. Article number 8 commands Templarios to “selflessly love and serve all of humanity.” In a similar vein, article 9 states, “A Templar Knight understands that there is a God, a life created by Him, an eternal truth and a divine purpose to serve God and mankind.” Given the cartel’s logic of neutralizing rivals, point 16 makes a bizarre call to respect diversity. “The Templars should not have a negative attitude against any man that has been created by God, even if he is different or strange. On the contrary, the Templar should understand how others seek God.” Going a step further, article 17 makes it clear that the raison d’etre of the cartel is seeking truth through God. “A soldier of the Templars cannot be enslaved by sectarian beliefs and shallow opinions. God is truth and without God there is no truth. The Templar must always search for the truth because

in truth there is God.”

Templario leadership didn’t limit their efforts at indoctrination into a pseudo-Christian narco-sect to the written word, which probably more than a few foot soldiers couldn’t read anyway. Christian symbols employed by the original Knights Templar were appropriated and reimagined to appeal to young Michoacáno males. Most importantly the Michoacáno drug cartel adopted the Cross of the Knights Templar, also known as the Cross Patteé, as part of its insignia. In a country where 81 percent of the population claims to be Catholic, the crucifix in its myriad manifestations not only symbolizes the religion of the great majority of Mexicans but also comes close to being an icon of national identity alongside the Virgin of Guadalupe.

While not Christian symbols per se, the battle gear and ceremonial garb employed by the cartel are replicas of those of the medieval Knights Templar. Chain mail armor, helmets, swords, maces, and white robes emblazoned with the signature red cross were used for inductions of new members and other specials occasions and reified the idea that initiates were not just joining a narco syndicate but a paramilitary sect dedicated to defending the noble but defenseless people of Michoacán in the face of “foreign invasion,” in the guise of the Zetas cartel, who were ironically invited to open up shop in the state as allies of El Chayo.

The pseudo-Christianity of the Templarios wasn’t limited to codes, credos, and ceremonial garb. In one of Latin America’s most peculiar cases of folk saints, Nazario Moreno became one even prior to his death. The story of San Nazario begins with the drug war launched by fellow Michoacáno, former president Felipe Calderon. In early 2007, to the surprise of Most Mexicans, recently inaugurated Calderon sent the army to crush the Knights Templar predecessor, La Familia Michoacána, in his home state. At first, the cartel that specialized in methamphetamines was largely able to evade the troops and continue daily operations. However, the news in 2010 that government forces had killed El Chayo in a firefight seemed to give the Calderon administration the upper hand and cast doubt on the future of the brutal cartel.

With trust in government at record lows during the Calderon administration and current one of Pena Nieto, many Mexicans, especially Michoacános, doubted the official story that the “Craziest One” had died in a firefight with marines. And the lack of a cadaver raised even more suspicion. It would seem (with emphasis on “seem” since all is not what it appears in Mexico’s surreal drug war) that El Chayo was killed, again, in 2013, in a gun battle as he was surprised celebrating his birthday in the Tierra Caliente region of Michoacán. This time, however, there was a body, and the Mexican government claimed to have positively identified it as Moreno’s.

Not even Colombian novelist Garcia Marquez could have penned a more surreal story than that of the sanctification of El Chayo as a narco folk saint among Knights Templar members and fellow travelers. “Saint Nazario’s” sanctification is as extraordinary as that of Comandante Pantera, (né Jonathan Legaria Vargas) the slain founder of Santa Muerte Internacional, the premier organization of the Mexican folk saint of death. Pantera is the first adjunct folk saint in Latin America for another one, Saint Death in this case. Not to be outdone, the Templarios capo morphed into a folk saint while he was still living! Throughout the Tierra Caliente region, which was largely controlled by the Knights Templar, the ruthless cartel erected chapels dedicated to their patron saint, San Nazario, who even has a prayer dedicated to him.

Deliver me from all sin,

Give me blessed protection,

Protector of the poorest,

Knight of the people,

Saint Nazario, give us life,

Blessed light of the night,

Defender of the sick,

I entrust myself to you always.

Glory to God the Father,

To you I dedicate my rosary,

Give us health and more work,

Abundance in our hands,

May our people be blessed,

I ask of you Saint Nazario.

Now that many of the towns in the Tierra Caliente region of Michoacán, where devotion to him has been strongest, are under control of the self-defense groups or new cartels, such as the New Generation Jalisco, it is unlikely that San Nazario has much of a future as one of Latin American’s newest folk saints. More established grassroots saints, such as Santa Muerte, Jesus Malverde, and Gaucho Gil were not created in a context of narco-violence and all quickly became multitasking miracle-workers hearing petitions for health, wealth, and love, in addition to pleas for protection from rivals and for harm to enemies.

While the demise of the Knights Templar cartel will likely spell the end of San Nazario as a narco folk saint many of the objective conditions that gave rise to the messianic meth producers haven’t changed. The existence of Pentecostal criminal gangs in Brazil, especially Rio de Janeiro, demonstrates that the pseudo-evangelicalism of the Templarios of Michoacán was not totally anomalous. Between the Templarios and Pentecostal gangsters in Brazil we have not seen the end of narco-evangelicalism in Latin America. Meanwhile, several roadside Santa Muerte shrines at the entrance of Arteaga, in Tierra Caliente, welcome visitors to the hometown of Servando Gomez Martinez, aka la Tuta, the imprisoned co-founder of the unusual cartel.