Saint Barbara as the Patron Saint of Grunts

Saint Barbara as the Patron Saint of Grunts

51 years ago – this past Sunday - around 0630, I was looking over the berm shown in the picture, wondering how I emerged alive.  It was Tet 1968.  A very thin 52d ARVN Ranger Battalion was defending the Xuan Loc airfield against constant assaults. 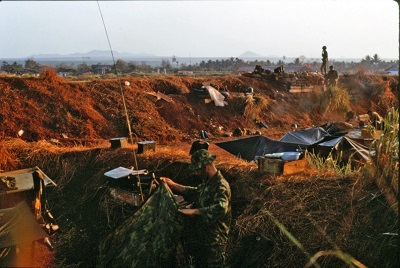 Less than two miles to the south and within sight, our family compound, Ranger Hill, was under equal pressure.  There, it was defended by the Ranger wives, our stay behind wounded and a small rear detachment.  The women manned the .50 calibers and carried the ammo, under fire, to keep the guns going. In a unique turn of the tables, I actually called artillery fire on the hill and could see and adjust by impact.

The battalion at Xuan Loc was only half strength, as the other half had departed 30 Jan, to defend the province capital at Baria. We were all supposed to be there, but were stopped in mid-deployment when VC began to filter into Xuan Loc.  In that we were at the airfield, we were told to defend it.

Bulldozers from the 11th ACR threw up a hasty berm. We were very thinly manned and also had to defend the southern portion of the town and the western approaches through the rubber plantation, which was the VC primary axis of advance. Pic enclosed. 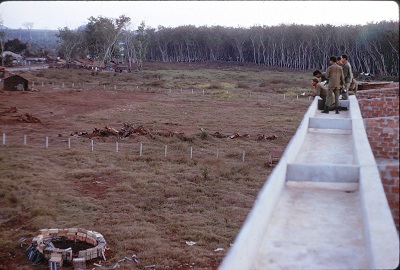 The battalion (-) was tied in on the berm with a Heavy Battery (2 x 175 and 2 x 8").  The Bn often went out as  security for artillery raids with them-the 175's were usually the only arty that could reach a lot of known targets and they were our only artillery much of the time. We actually became close-the RVN Rangers and the American gun bunnies.....plus, the arty btry had its own kitchen which was great compared to the rice we usually got.

As part of our tie-in, the bn cdr and I went to the battery and talked to the BC and Chief of Smoke-an old Korea vet.  The bn cdr said the VC were massing and we were at the immediate front of the likely target (MACV/Div HQ).  The Chief said he had been in a 155 Long Tom unit in Korea and had been nearly overrun when they lowered the barrels and fired nose plugs at the Chinese.  My Bn Cdr said:  “Good idea.  Get ready.”

We went back to our position and as predicted, around 0100 on 1 Feb., we were about to get overrun.  I could see the enemy massing across from us (we were defending one side of the airfield - enemy on the other).  I grabbed our TA 312 and told the battery to get ready to defend itself.  Almost immediately, the 175's dropped barrels across the berm.  I could see crew stuffing nose plugs in the front and ramming them down.  At the breach, they stuffed spare powder bags they had soaked in diesel.  The vet Chief of Smoke had done his job.

Without command, they fired directly across our front..........It was an immediate "light of day", a tremendous noise and blast.  I could see dozens of figure as silhouettes.  End of assault.

In the AM, we went across the runway.  Stacked in a corner against the barbed wire were at least 30 crispy critters............We also set the likely record for close support by an 8".  The Chief went out and measured the distance from barrel to crater-800 meters (30 meters in front of the Ranger line.)  Gun crew said it was the only time they could actually see the round impact.

We spent 30 Jan to 6 Feb dug in at the airfield and we used that heavy battery every day and night-much as one would use a 105mm DS element today.  Once the dust had settled, my battalion commander wished to thank the artillery battery as we all recognized that they had saved us. The letter shown below was a mutual effort.

In my mind, 1-4 Feb will always be Saint Barbara’s Days. 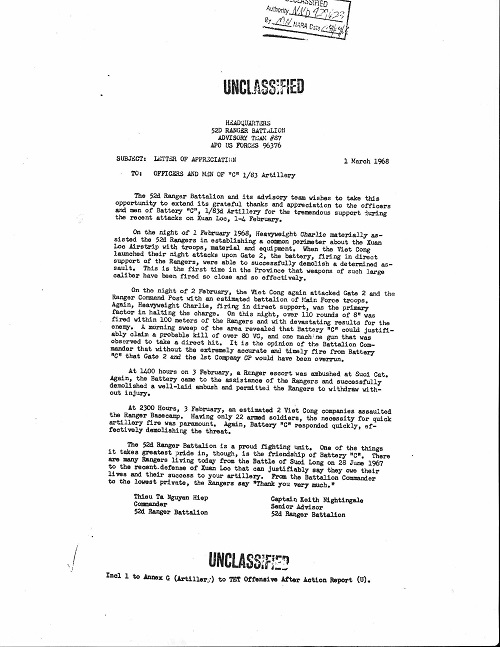