Review of "Towards a Philosophy of Narco Violence in Mexico"

Review of Towards a Philosophy of Narco Violence in Mexico 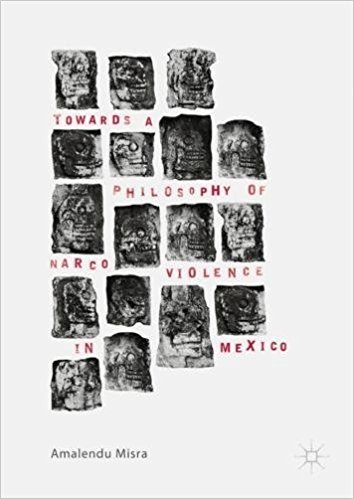 Amalendu Misra, Towards a Philosophy of Narco Violence in Mexico

The author of the work, Amalendu Misra, is a British national fluent in Spanish as well as several other languages. He is an extremely well-educated scholar having been awarded five post-graduate degrees and certifications including a Ph.D. in Politics from the University of Hull. His areas of research expertise include his present focus on the interrogation of violence in the political process and its sub-themes related to the Politics of Sexual Violence in Armed Conflicts, the Role of Violence in the Sacred, and Managing Violence in Post-Conflict Societies. He is presently a Senior Lecturer at Lancaster University, United Kingdom and was provided a large grant from the British Academy to conduct field research in Mexico leading to the publication of the book.

The intent of the work is to develop a theory and philosophy behind the narco-killings taking place in contemporary Mexico (p. viii). As a result, the central narrative of the work focuses on killing as well as the philosophy behind the actual process of taking life. Utilizing a transdisciplinary approach, the author then goes on to articulate his research design and study methodologies. In the process, a number of concepts are introduced within the work including those related to necropolitics as “a form of subjugation of life to the power of death” and necropower derived from “various manifestations of the sovereignty of death exercised by its numerous agents in a sociopolitical setting” (p. 13).

The work contains a foreword, acknowledgments, six chapters and accompanying references, a short concluding section, bibliography, and an index. The chapter titles and their focuses are as follows:

• 1. Prologue: The Horror—While not in a declared state of war, Mexico is experiencing what one might call the industrialization of death…Contemporary Mexico is in the throes of a narcowar… Taxonomy of Killing (killing, sacrifice, murder)…good or bad death (pp. 1-6).

• 2. Necropower—is an exploration of the process of killing. It is a mediation on murder as a human activity… to understand the full remit of this phenomenon one needs to situate it within the context of what I call necropower (p. 7).

• 3. Arguing Death—an exploration of the singularly unique Mexican philosophy behind death and dying… moments of regression or exceptional moments when humanity apes the premodern or prehistoric ritual of sacrificing fellow human beings (p. 8).

• 4. The Gods of Wrath—focuses on this specific enactment of prehistory sacrifice in a postmodern setting…Assessing the rise of La Santa Muerte, it asks why a section of Mexican society has offered its allegiance to a death deity (p. 8).

• 5. Necessary Murder—engages with the democratization of the killing process in Mexico. Focusing on vigilantism and state-sponsored disappearance, it stresses how murder has become mainstream in contemporary Mexico (p. 9).

Some of the referenced works cited in Misra’s book will be quite familiar to SWJ—El Centro readers and other professionals following the narcowars in Mexico. These include R. Andrew Chesnut’s Devoted to Death: Santa Muerte, the Skeleton Saint, George Grayson’s Mexico: Narco-Violence and a Failed State, Ioan Grillo’s El Narco—Inside Mexico’s Criminal Insurgency, and Ed Vulliamy’s Amexica: A War Along the Borderline. Others referenced in the work are more esoteric and academically specialized. These include René Girard’s Violence and the Sacred (trans), Henri Lefebvre, The Production of Space (trans), and Claudio Lomnitz’s Death and the Idea of Mexico and the academic theories within the more cloistered circles associated with them.

My initial response to the work when I began reading it was less than enthusiastic. The ‘philosophical reflection’ on killing and death this book portends and its use of narratives and interpretations related to historical, remembered, and societal judgement (British spelling) levels of analysis meant this was not going to be an easy read (p. xviii). Even worse, references to constructed spaces, zeitgeist, symbols of determinism, and existential issues suggested that we would be quickly taken down the path of practical irrelevance. As I read it more deeply however, I found the work to be both philosophical and elegant while at the same time steeped in blood and death—a very surreal juxtaposition of exploratory scholarship, theory, and glimpses of the very real horrors being inflicted on regions of Mexico on a daily basis.

The most important take away from the work results from Misra’s warnings concerning the rise of necropower that has attached itself onto Mexican society and culture much like the ‘life draining lich’ found in folklore and fantasy:

In the context of Mexico, however, necropower has transgressed the fundamental structure of law and sovereign power. If anything, it is the pervasive presence of death forces operating within its jurisdiction with absolute immunity that has severely curtailed the Mexican state’s traditional legacy…

Moreover, sovereignty of necropower in Mexico is absolute. It is much more pervasive than the power of the legal de jure sovereign, that is, the state. It speaks to society in a way that an authoritarian or dictatorial state cannot. It exercises unrestrained power as its most visible self. As a result, necropower manifests itself in the context of what one may call phobic fear. Thanks to the retreat of the Mexican state, necropower has unveiled a form of sovereignty that is like no other. The nation and its constituents are paralyzed by fear (p. 159).

From an emerging security crisis in Mexico perspective—tied into Misra’s before mentioned necropower warnings— “Chapter 4. The Gods of Wrath” (pp. 71-98) may be considered one of the most illustrative chapters of this threat in action. The chapter focuses on the rapid rise and expansion of the cult of Santa Muerte—with over 10 million followers now existing—and the challenge this poses to both secular and religious sovereignty in Mexico. As for background:

Sovereignty in the Mexican context has two readings. In the first instance, sovereignty refers to the unquestionable legal control of the state over its citizens. Secondly, it may denote the unofficial but binding religious authority of the Catholic Church over its followers. Taken together, these two sets of authority and controlling mechanisms represent specific manifestations of sovereignty (p. 73).

Misra goes on in the rest of the chapter to develop his ‘tentative position,’ coupled together from research methods utilized across social science disciplines, to argue that Santa Muerte is beginning to undermine the foundations of the Mexican state (p. 74). This highlights how Santa Muerte is said to have become a demand-drive sovereign authority in her own right—especially in regions where state sovereignty is in retreat as in certain socio-economic spaces in Mexico City and other parts of the country. Modern life can be nasty, brutish, and short in narco controlled regions of Mexico and ultimately the downtrodden local populace, and even the narcos themselves, are increasingly reluctant to continue putting their faith in a weak Christian god that can’t protect themself, becomes victimized, and eventually suffers the horrible fate of crucifixion. Rather, a pre-Colombian like god—one that is fierce, defiant, amoral, and the embodiment of death itself—is being petitioned for divine favors in such Hobbesian environments. This god exists beyond good and evil, is non-judgmental, and increasingly is being petitioned to provide protective, offensive (including death magic), and many other types of magico-religious spells to her worshipers.

Of great interest to the reviewer is how Misra’s necropower construct goes beyond the more secular and well known organized crime versus criminal insurgency debates related to the narcowars taking place in Mexico. Instead, it ties directly into the far less known spiritual—and even blood cultist—insurgency research that has been conducted by the reviewer and others:

This insurgency form goes beyond religious motivations and takes us down the path of cultish behaviors, utopian worlds, apocalyptic yearnings, and even instances of human sacrifice to one or more gods for appeasement or dark-magic religious petition purposes. The existence of this type of insurgency form has been recognized by a number of scholars (O’Neill, 2005; Kaplan, 2007; and Lauder, 2009) primarily within the last decade and ultimately represents a fusion of criminality, spirituality, and barbarism.[1]

From a close reading of the Misra work, no clear referential links appear to exist between his research and arguments and the blood (death) cultist insurgency literature that has been developing. At most, he appears to have been influenced to some extent by a SWJ—El Centro article initially published back in May 2010.[2] That article “The Spiritual Significance of ¿Plata O Plomo?”, written by Pamela Ligouri Bunker and the reviewer, introduced some early and initial work on the criminal-spiritual symbiosis then emerging in Mexico and its potentials for undermining state power (p. 77).  Hence, it may be acknowledged that he has independently—utilizing his own unique transdisciplinary approach—developed a unique theory related to the narco-killings in Mexico. This is a theory along with its supporting philosophical construct that very much resonates with evolving spiritual and blood cultist insurgency research perceptions. In fact, it can be argued, Misra has now provided what may be considered the best single philosophical work supporting such insurgency research perceptions as presently applies to the security situation in Mexico.

The only real detraction to this amazing little tome is neither its scholarship, treatment of the subject matter, or the merit of its arguments but rather its excessive price. While this is a very base and crass critique—directed more at the publisher than the book’s author—it represents a very important consideration. Even though the work is being offered for sale at $80.00 for the discounted hardcopy edition and $69.00 for the discounted e-book edition, this is still a lot of money to pay for a slim 187 page 6 x 8.5 inch work. This will guarantee that the distribution of the work will be primarily limited to mostly affluent university libraries and a small number of academics in philosophy, death studies, and contemporary Mexico studies areas. We can only trust that, at some point, the publisher will offer a more reasonably priced softcopy edition so that security and policy professionals, military officers, and other SWJ El Centro community of interest readers may potentially benefit from the unique and important security insights this work provides.