Great power competition is today’s defining strategic issue.  Crucially this competition is seen as remaining below the level of great power armed conflict, instead ranging across diverse areas including economic, diplomatic, cyber, information campaigns and proxy wars. Such diversity gives the great powers much more choice in the grand strategies they could potentially use to advance their interests than during the Cold War bi-polar confrontation.

In sharp contrast, American grand strategy thinking has today been captured by a single approach. A recent review of contemporary US grand strategy proposals found the neorealist international relations theory dominates. This way of looking at how the world works has been further narrowed down to the ‘balancing’ subtype.[1]  Demonstrating how entrenched this theory now is, the 2018 National Defense Strategy’s approach is effectively neo-realism 101 with balancing at centre stage.[2]

Neo-realism (new realism) considers all states act the same with their foreign policies determined by relative military power balances. It’s the theory that gives us terms such as uni-polar, bi-polar, multi-polar, making us see the world in terms of military might and conflict. The international system’s structure is key. In way of contrast, in just plain-vanilla realism, human nature is the key; individuals innately seek dominance over others.

For practical people such neo-realist abstractions become really important when it’s recalled that ‘balancing’ – more formally termed a balance of power - involves the threat or use of violence. Under this, war can play a major role and is both acceptable behaviour and a legitimate means of statecraft. Creating a favourable balance of power may require a major war between the great powers.

The neo-realist balancing approach seems to be purposefully constructing an uninviting future where success is either uncertain or ugly. In the National Defense Strategy the two great powers of concern are China and Russia. A future China may overtake the US in economic power and be able to spend more on defense than America, and potentially create a larger military force. On the numbers, China might win a ‘balancing’ relative power game. Russia is easier through being in long-term economic and demographic decline but has considerable nuclear forces which makes using war as a means of statecraft unappealing. A nuclear victory might be a pyrrhic one.

There are other options and other roads that could be taken. As noted, this era of great power geopolitical competition is one where a diversity of means can and are being used. This characteristic suggests a diversity of perspectives should be used when thinking about grand strategy. This does not mean that neorealism – or balancing – not feature in grand strategy thinking merely that other perspectives not be overlooked. American grand strategy is too important to allow myopia to unintentionally limit debate. It is worthwhile thinking more broadly.

To suggest what is possible and encourage consideration of different framing perspectives I’ve recently written a paper published under the DoD’s Strategic Multilayer Assessment program. This paper derived some grand strategy alternatives specifically related to China (twelve) and Russia (ten) by drawing on a broader spectrum of international relation’s theories than only neorealism.[3] The paper does not advocate any particular grand strategy but instead quickly sketches alternatives, hoping to provoke creative thinking and innovation.

The grand strategy alternatives outlined could each create a different future but these are more than simply possibilities. The various ends and ways sketched are not products of the imagination but rather derived from international relations theoretical perspectives that have been developed, assessed and critiqued in academia over an extended period. In being so devised the alternatives are given a structure useful in assessing these and other options.

Such an approach means there are some differences to that taken elsewhere. The most obvious is that national interests do not drive the grand strategies examined.  National interest is a contested term mainly due to its vagueness and imprecision. Any societal group or individual can claim any objective is in the national interest.[4] Moreover knowing when the national interest has been achieved is difficult, as they are mostly open-ended, aspirational statements.  ‘National interest’ is also somewhat astrategic. The term by definition encompasses only one nation whereas strategy involves at least a bi-lateral relationship between ‘us’ and ‘them’. If strategy intrinsically involves interacting with others, deriving strategies with reference to only a single state is inherently problematic.

While ends can be explained more fully by avoiding ‘national interest’, grand strategy is inherently about ways.  While many ways are possible, the paper uses the fundamental ways of changing an existing relationship with another state into something better: stopping them doing something, working with them or trying to change their minds.  Incorporating international relations theoretical thinking leads to three broad grand strategy types.[5]

Denial grand strategies are constructed around the notion that superior power determines outcomes; you can stop others achieving their objectives by being more powerful than them. Engagement grand strategies make use of groups in the other state that have interests and desires that you share, or at least that are useful to you. Reform grand strategies endeavour to change the ideas people hold.

The potential grand strategies discussed are as follows: 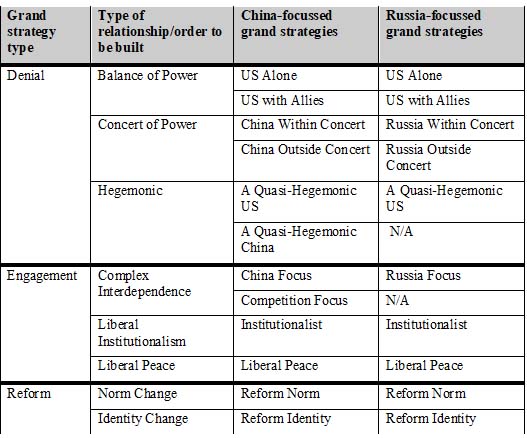 The alternatives given are very much a high-level outline. Determinations on which are preferred would require deeper investigation. Some may impose a resource burden some consider imprudent while others may clash with strategic culture. Importantly, it is problematic blending different grand strategy types; history suggests doing so may lead to incoherence and failure.[6]

Considering a range of alternative grand strategies to meet the challenges China and Russia pose can help advance creative thinking and innovation. There is real utility to strategizing using different framing mechanisms. These challenges are of a type and scale that makes accepting theoretical diversity and rejecting myopia essential when formulating new grand strategies.

Peter Layton is a Visiting Fellow at the Griffith Asia Institute, Griffith University. A former RAAF Group Captain, he has extensive defense experience, including in the Pentagon and at National Defense University. He holds a doctorate in grand strategy. He is the author of the book ‘Grand Strategy’.