The 2015 National Security Strategy cited climate change as one of the major threats to the United States. It was right up there with aggression by Russia, challenges in cybersecurity, and outbreaks of infectious diseases.[i] It even listed climate change as one of the most significant risks facing the U.S.[ii] Other risks on that same list included: catastrophic attack on the U.S. homeland, attacks against U.S. citizens abroad, global economic crisis, proliferation of weapons of mass destruction, global infectious diseases outbreak, energy market disruption, and effects of weak and failing States.[iii] “Climate change” appeared fourteen times in the 2015 National Security Strategy. For reference, “terrorism” appeared seventeen times, “Russia” fifteen times, “China” twelve, and “Iran” eleven.

Even though climate change was such a key tenet of national security and awareness continued to grow after 2015, “climate change” appeared exactly zero times in the 2017 National Security Strategy. Comparatively, “Russia” appeared twenty-five times, “China” thirty-three times, “Iran” seventeen, and “Islamist” nine. Between 2015 and 2017, major threats to the world did not change too much, but those in charge did. Many of the things identified in 2015 continued to pose significant threats. Failing to address them does not make them go away.

An interesting aspect is that climate change is recognized as a global issue that threatens all countries to varying degrees. However, security is something that each country views through a national lense. There are a number of multilateral organizations to address global or regional issues—United Nations, NATO, European Union, etc. Some States claim an inability to take climate change without full participation of every country. Yet, States always rely more heavily on their own when looking at security. This is not really surprising, but it is interesting.

In recent years, politicians—domestically and abroad—sought political points by making allegations that refugees pose a national security threat. There is a rise in domestic, nationalist movements across the globe: Italy’s Five Star movement, Hungary, Austria, Germany’s Alternative for Deutschland, Brexit, Marine Le Pen in France, Jair Bolsonaro of Brazil, Donald Trump, and more. These parties spout misinformation, seeking to synomize “refugee” with “Muslim” and “Muslim” with “terrorist.” The problem with misinformation is that people think they are informed. People generally realize when they are uninformed and acknowledge such.

The threats around refugees come despite arguments in favor of greater refugee response from senior national security personnel. In response to President Trump’s refugee ban, over 115 senior national security officials published a letter against the ban.[vii] These officials include: Susan Rice (former National Security Advisor), Michael Hayden (former Director of National Intelligence, Director of Central Intelligence, Director of National Security Agency, and retired General of the Air Force), Madeleine Albright (former Secretary of State), Janet Napolitano (former Director of Homeland Security), and more. One of the main points was that it provides people and organizations malign to U.S. interests with a recruitment narrative. Another argument presented is that refugees undergo the toughest screening to enter the United States.

Public comments aside, the United States continues to be the largest single donor to the United Nations Refugee Agency. These statements hold true through both Republican and Democratic administrations. The U.S. is currently eighth in per capita contributions to UNHCR. The chart below shows voluntary contributions from the U.S. Government to UNHCR from 2012 to 2018:[viii] [ix]

Further, until recently, the U.S. resettled more refugees than all other countries combined. From 2003 to 2018, there has been 1,011,126 refugee resettlements globally.[x] Of these, the United States resettled 641,452 refugees.[xi] A per year breakdown is:[xii] 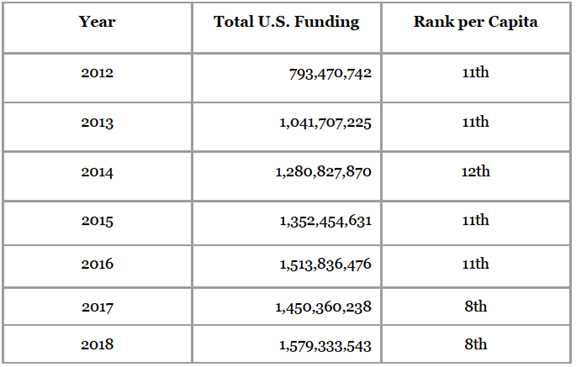 [ix] Private citizens are quite generous to UNHCR, too. In 2017, the U.S. contributed the second highest amount to UNHCR in private sector income.

[xiii] Nowrasteh, A., Terrorism and Immigration: A Risk Analysis.

J. David Thompson
J. David Thompson is a Civil Affairs Major. He has a Juris Doctorate from Washington Lee School of Law. He also holds a BS in Economics and MBA-Leadership from Liberty University. Outside the military, he's worked at the UN Refugee Agency, Department of Defense, and Physicians for Human Rights – Israel. Follow him on Twitter @jdthompson910