Prisoners in the War on Terror: Captured NATO Personnel Since 2001

Prisoners in the War on Terror: Captured NATO Personnel Since 2001

A total of 74 soldiers from NATO countries have been captured by opposing forces since 2001 in conflicts ranging from the large scale interventions in Iraq and Afghanistan to smaller missions in Libya or Somalia. Despite force protection measures, captivity remains an integrated part of the threat to deployed NATO forces, and prisoners of war or other versions of captivity continue to play a role in operational theaters, even though this number is remarkably lower than in past conflicts. A total of 169,000 British and commonwealth servicemen were captured 1939-1945[i] and 591 American Prisoners of War were released from Vietnamese captivity in accordance with the Paris Peace agreement in 1973[ii]. This article explores the circumstances of captivity of NATO soldiers since 2001, including the events leading to captivity, treatment in captivity and possible release or rescue. This overview will provide decision makers with information on a poorly covered issue of modern warfare, while simultaneously give guidance to both training and force protection. The essay draws on a number of openly accessible sources combined with interviews with former captive NATO soldiers.

A structured open-source search for incidents involving captivity of NATO soldiers reveals a total of 20 incidents with a total of 74 NATO soldiers held captive. The term captive here is used as a “catch all” phrase for any kind of captivity, be it imprisonment, detainment or hostage taking. Presumably, there are a considerable number of unknown cases, as cases with shorter periods of captivity which are solved outside media focus may be left underreported. Turkish soldiers being captured by Kurdish separatists are excluded from this analysis, as the Turkish-Kurdish conflict is of less relevance to the missions in which Western NATO soldiers are engaged. Further, failed attempts to capture NATO personnel are not included. Included are soldiers from non-NATO countries that are deployed alongside NATO forces.

Of the 74 captives, the vast majority are from either the US or the UK. This is due to the fact that a considerable number of UK and US sailors have been captured by Iranian authorities in three distinct incidents in 2004, 2007 and 2016. Further, US service members make up the majority of captured personnel in both Iraq and Afghanistan, which is not surprising given that the US contributed more forces to those two theatres than any other coalition member. Captors differ from country to country. All NATO soldiers captured in Iran have been kept by Iranian authorities. Conversely in Afghanistan, all captured NATO soldiers have been kept by various factions within the Taliban.

Summarizing, 46 have been kept by state actors (primarily Iran) and 28 have been kept by non-state actors; primarily in Iraq and Afghanistan. While some cases are well documented with several independent sources, others are poorly covered. However, lack of other data leads us to base the analysis on the available sources. The circumstances and treatment in captivity will be outlined in following sections.

The Road to Captivity

It is hard to prove whether adversaries had or have a planned intent to capture NATO personnel, or if the captives simply provided themselves as targets of opportunity. An example of a probable planned operation with a clear intent to capture NATO soldiers is the Dutch helicopter crew taken in Libya in 2011. The crew reported that armed men were waiting for them as they arrived on the beach in Libya where they were to extract Westerners. Conversely, probably no insurgent expected an American to wander off his base in either Iraq (Ahmed Kousay Al-Taie, 2006) or Afghanistan (Bowe Bergdahl, 2009), both soldiers presented themselves as targets of opportunity.

The majority of the publicly known cases of captured NATO personnel have been exposed in media by their captors. This in itself is not surprising, as the cases are known exactly because they have been made public, and the underreported cases were not. This study is thus not able to explore the amount of cases exposed in media compared to those not exposed, as the data is highly skewed in favor of the publicly known cases. A study also including cases not known to the public may be able to illustrate the likelihood of media exposure. This study is, however, able to highlight the type and purpose of media exposure.

In all cases involving Iranian authorities, the captives (or some of them) have been shown admitting illegal entry into Iranian territorial waters. Videos showing captured US or UK sailors pointing at maps or orally admitting to navigational mistakes have been broadcasted by Iranian television. The actual moment of capture was also filmed by Iranians and later broadcasted[iii].

Non state actors in the Middle East and Afghanistan have either exposed their captives in media using shorter proof-of-life videos or not aired any footage or video at all. The case of Bowe Bergdahl serves as an exemption as his captors broadcasted several videos during his almost 5 years as prisoner.

Direct access to captives had been provided to journalists as in the case of the 8 OSCE observers, captured in Ukraine, May 2014. A staged “press conference” with attendance by local and international media led by the self-appointed pro-Russian separatist mayor in Slavyansk, serves as an example of controlled direct access to captives[iv]. Controlled in the sense that even though the journalists were free to ask questions directly to the captives, the captives themselves felt obliged to communicate specific key points, including reassurance that the captors had treated them fairly and that they were ‘guests’ of the mayor.

Interrogation seems to be standard when captured by state actors. Almost all captives in the hands of authorities in Saddam’s Iraq and in Iran have been interrogated. The US sailors captured in 2016 by Iranian authorities were asked detailed questions about their equipment and about the position and capability of US forces in the region. Their answers were checked against each other, their personal belongings were searched and information taken from laptops and phones. While non-state actors appear to interrogate their captives, the themes covered are less operational. The OSCE observers captured in Ukraine, 2014, were asked to open their phones so their captors could access information in the devices. Bowe Bergdahl was asked questions about how US soldiers lived on their bases in Afghanistan and about US policy. The questions were more of cultural curiosity than of intelligence value.

Harsh treatment like pushing, blindfolding, smaller beatings and intimidation was evident in most cases. Direct torture and severe violence, however, is almost exclusively committed by non-state actors in the Middle East and Afghanistan - insurgents in Iraq or the Taliban in Afghanistan are two examples. In most cases they ultimately killed their captives. At the same time, though, most captors provided medical treatment to their captives. Even if the quality and regularity of the medical care provided may have been questionable, there are several examples of extensive medical care, for example of Jessica Lynch, captured in Iraq, March, 2003 who was treated in a hospital until her recovery by friendly forces. In Ukraine, May 2014, a Swedish OSCE observer was released several days before the rest of the group as he suffered from diabetes and did not have his medication with him in captivity[v]. In the case of the German-Danish team of UN observers captured in Georgia, 2003, one of the Germans had a medical background and provided medical care to some of his captors.

Of the 74 captives, 14 have died, 60 have survived. The vast majority of survivors (55) have been released, few (4) have been saved in recovery operations and only one has managed to escape: a French intelligence operator captured in Somalia managed to escape after one month of captivity. This does not imply, that there have not been more attempts to escape among the other captives. Bowe Bergdahl is known to have tried to escape twice[vi]. Not surprisingly, all captives being held by state authorities have been released or rescued, i.e. no NATO soldier has died in captivity in the hands of state authorities. Conversely the survival rate of those NATO soldiers captured by insurgents in Iraq and Afghanistan is merely 17,6 %.

While it lies outside the scope of this article to speculate what would or could have happened, had the abovementioned NATO soldiers not been captured, it is possible to point to some of the more obvious operational and/or strategic consequences. The most basic observation is that while the actual capture takes place in a tactical environment, the cases are often solved at the strategic and diplomatic level. That Bowe Bergdahl left his outpost in Afghanistan was a tactical decision with consequences way above his operational level, as his release was an issue in negotiations between US and Taliban officials for years[vii]. This is well in line with the concept of the strategic corporal, where the actions of a low ranking soldier may impact the highest political levels.

The second observation for the operational environment is the resources both in terms of manpower and intelligence assets that are devoted to search and rescue operations. While such operations obviously can serve dual purposes in fighting insurgents in a given area, focus nevertheless is redirected from the main task at hand. For example, reportedly 4,000 US soldiers were involved in the attempt to recover 3 US soldiers taken captive in Iraq in 2007[viii]. Avoiding captivity is thus not just in the interest of the individual soldier, but also in the interest of military units and in main mission accomplishment. Comfortingly, though, if taken captured the survival rates show, that no soldier should lose hope concerning returning home.

The most frequent type of captivity facing NATO soldiers is by state actors releasing captives after a few days or weeks. The most dangerous captivity though, is by the hands of non-state actors in the Middle East. Few soldiers have been captured by their enemy in actual combat; the majority of captives are made up of unarmed observers or smaller isolated groups lost in borderlands.  While in captivity, the captives face likely exposure to media, interrogation on a variety of issues and generally rough handling, though seldom with direct torture. While the numbers of captured NATO soldiers in recent years is low compared to previous conflicts, captivity is a risk with consequences for both the individual and his or hers unit and country. 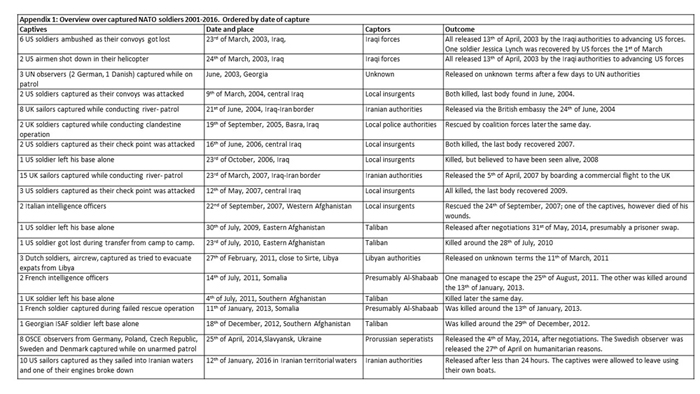 Jens Flinch Jørgensen is an intelligence analyst in the Danish Army Intelligence Center with a special focus on issues related to hostages and captivity. He holds a M.Sc. in Geography and is a reserve Captain.

An interesting subject and one alas that will reoccur.

I would add two British SOF incidents, both in the public domain. One in Basra, Iraq and citing Wikipedia 'On 19 September 2005, two undercover British Special Air Service (SAS) soldiers disguised in Arab civilian garments and headdresses opened fire on Iraqi Police officers after having been stopped at a roadblock. Two Iraqi officers were shot, at least one of whom died.[1] The two British men were arrested and taken to the Al Jameat police station'. A rescue mission was mounted successfully. See: https://en.wikipedia.org/wiki/Basra_prison_incident

The second was in Libya, much to official embarrassment: 'an early operation was conducted by E-Squadron of UK special forces; consisting of elements from the SAS, SBS and MI6. This was to contact the Libyan rebel and opposition leaders, however the mission was a failure after the team was captured and held prisoner for 72 hours by Libyan rebels'. See: https://en.wikipedia.org/wiki/List_of_SAS_operations

I would be intrigued to know the author's reaction to whether "lessons were learnt" from the repeated hostage taking, mainly by one faction, the Serbs, during the intervention (UN & NATO) in Bosnia-Herzegovina. From memory no-one was killed.