Preparing for the Complexities of the 21st Century Security Environment

Preparing for the Complexities of the 21st Century Security Environment

The United States’ wars in Afghanistan and Iraq dominated the first decade of the twenty-first century.  The U.S. must now shift focus away from the Global War on Terror and prepare for the complexities of the twenty-first century international security environment.  In doing so, the U.S. military will be well-served to learn and apply the insights of both Swiss writer Antoine-Henri Jomini and the Prussian Carl von Clausewitz.  The two military theorists have shaped the rise of modern warfare in the West more than any writers, scholars, practitioners, or “great captains”.  The uncertainty of what the next potential conflict may be, the contemporary rise of hybrid threats and non-state actors, and current doctrine, specifically the application of operational art and design and the U.S. Army’s operational concept of decisive action operations, demand that the United States military understands and applies both theories.

The Council on Foreign Relations’ Preventive Priorities Survey (PPS) analyzes the likelihood of ongoing and potential conflicts affecting U.S. interests in the coming year in order to help policymakers determine the best use of limited resources; for 2013, the PPS outlines thirty plausible contingencies spanning the range of military operations.[1]  The PPS makes evident that prediction of conflict, even by experts, is not feasible.  For that reason, the U.S. must be prepared for any of the credible contingencies, including against conventional or hybrid threats as well as non-state actors.  The wide array of contingencies also affirms the need for the insights of both Jomini and Clausewitz, despite the fact that their writings are often analyzed as the antithesis of each other.  Jomini focused his writings on the science of war, seeking to simplify strategy to prescriptive techniques focused on the principles of offensive action, massing forces at decisive points, and the importance of interior lines of operation.  Clausewitz, on the other hand, viewed war as complex and inexorably linked with social and political dynamics.[2]  The oft quoted maxim that “war is merely the continuation of policy by other means”[3] denotes that Clausewitz believes political goals drive strategy and war is simply a way to achieve those goals.  To Jomini, the flawless execution of war is the strategy.

An analysis of potential conflicts involving each of the likely threats – conventional, hybrid and non-state actors – helps to understand how the theories apply to the 21st international security environment.  A plausible scenario of high impact on U.S. interests is a major military incident with China involving U.S. or allied forces such as a Sino-Japanese war over the Senkaku/Diaoyu Islands.[4]  The United States is obligated by treaty to defend Japan in a clash over the islands and would therefore deploy naval and presumably land forces to carry out a military campaign against Chinese armed forces.  The theories of Clausewitz and Jomini converge in these types of conventional force scenarios because the military objective closely mirrors the desired political end state.  In this case, the political end state is for Japan to retain possession of the islands; defeat of the Chinese forces attacking to seize the islands would result in attainment of the political objective.  Jominian theory prescribes that the U.S./Japan alliance take advantage of interior lines of operation to mass against the Chinese forces’ perceived point of weakness, or decisive point, and attack.  While Jominian theory relies on offensive action, Clausewitz claims that “defense is a stronger form of war than to attack.”  Like Jomini, however, he touts the advantage of divergence, or interior lines, as being decisive in the conduct of operations. [5]  While the theorists agree on the military objective that supports the political goal and the use of interior lines of operation to provide the U.S./Japan alliance a marked advantage, they differ on Jomini’s principle of persistence.  That is to say, Jomini would chase ultimate victory by pursuing China’s forces; Clausewitz, on the other hand, would not seek total defeat given that the political objective is a lesser goal and does not require escalation of violence beyond that to deter China from continuing attempts to seize the islands.[6]

Despite the possibility of a conventional conflict as in the Sino-Japanese example, current debate on the future of conflict is predominantly centered on the cotemporary rise of non-state actors as well as hybrid threats in the model of Hezbollah.  These threats account for more than two-thirds of the Council of Foreign Relations’ preventive priorities for 2013.[7]  Scholars of Jomini and Clausewitz struggle with limited wars because they are not able to cleanly apply the principles of either theory.  Jomini believed these small wars to be “dangerous and deplorable” and advised nations to avoid them altogether; in fact, his only significant contribution on the matter was that the political role of commanders would be equally important to armed force in achieving victory.[8]  Clausewitzian theorists struggle because it is unclear how to analyze warfare with non-state actors in terms of the wondrous trinity, the balance between the people, the commander and his army, and the government.[9]  The government component of the trilogy is often overlooked when dealing with non-state and hybrid threats.  Nevertheless, it is still valid in dealing with non-state actors, failed states, or transnational crime organizations.  These threats have sound strategic guidelines and in order to achieve success, the U.S. must understand their motives and the societal conditions that allow their formation and rise.  If war is a continuation of politics through other means, then insurgency is violent political rhetoric.  The key then is to understand the motives of these groups or organizations.  Irregular or limited warfare against hybrid threats and non-state actors thus requires a heavier emphasis on Clausewitzian theory because the problems are more complex and require a holistic strategy involving all elements of national power.  A subset of the strategy, direct action against the enemy, then relies on Jominian principles in order to achieve tactical success in support of the broader end state.  It is vital to understand that tactics or operations cannot themselves be the strategy for irregular warfare.  General McChrystal argues that tactics developed by the Joint Special Operations Command in Iraq to kill and capture terrorists “work, but they don’t produce decisive effects absent other, complimentary activities…the broader purpose is what’s important.”[10]

General McChrystal’s observations coupled with the wide array of potential threats confirm the need for U.S. military doctrine to reflect the principles of both Jomini and Clausewitz.  Using the joint operations planning framework of operational art and operational design, Clausewitz’ theory lends itself to operational art and Jomini’s to operational design.  Through operational art, commanders link ends, ways, and means to achieve a desired end state.  Developing the operational approach is based largely on an understanding of the operational environment and problem facing the force (Clausewitz).  Strategic guidance should define what constitutes “victory” or success (ends) and allocate adequate forces and resources (means) to achieve those objectives.  The operational approach (ways) of employing military capabilities to achieve the ends is for the supported joint force commander to develop (Jomini).[11]  This link between Clausewitz and Jomini is further developed by analyzing the U.S. Army’s 2015 Doctrine Strategy of decisive action operations.  Decisive action is the continuous, simultaneous combination of offensive, defensive, stability or defense support of civil authorities tasks to create the conditions for favorable conflict resolution.  The mission determines the relative weight of effort among the elements of decisive action.[12]  Under this concept, the offensive and defensive elements of decisive action, or combined arms maneuver, require a heavier application of Jominian theory; Clausewitz is more essential for stability operations and defense support of civil authorities, or wide area security.  This is not to say that the theories are applicable only for those tasks but that their weights are relative and based on the complexity of the problem; in other words, application of Clausewitz’s theory is directly correlated to the complexity of the problem the force is encountering.  Consequently, we can link the respective weight of the military theories to the weight of the elements of decisive action operations (see Figure 1).  In addition, the elements of decisive action, along with the applicable theories, must be considered and weighed appropriately against anticipated conditions through the phases of a campaign[13] (see Figure 2).  In simpler terms, military leaders can use Clausewitz to analyze and frame the problem, each containing a military objective to which we can apply a Jominian solution. 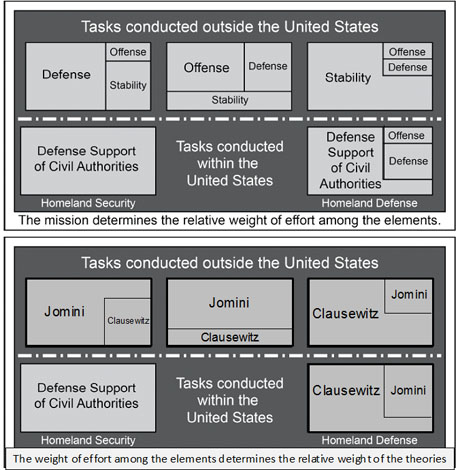 Figure 2: Combining the Elements of Decisive Action and Military Theories Through the Phases of a Notional Campaign 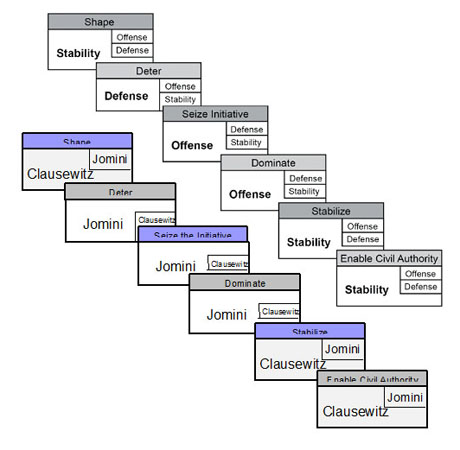 Historically, military policymakers have taken the lessons learned from their most recent conflict and have, in post-war eras, excessively relied on one of the theories in developing doctrine and strategy going forward.  Yet, the truly significant lesson learned from other post-war eras is that we cannot predict what the next conflict will be, as demonstrated by the thirty contingencies outlined in the PPS.  The U.S. military is once again emerging from protracted conflict and it would be well-served to acknowledge the dangers of reverting back to the views of only one theorist and ignoring the value of the other, especially when dealing with potential adversaries that cover the range from conventional to hybrid threats and non-state actors.  In brief, it is essential that doctrine for warfare in the twenty-first century be flexible and embraces the insights of both Jominian and Clausewitzian theory.

Bassford, Christopher.  “Jomini and Clausewitz: Their Interaction.”  Edited version of a paper presented to the 23rd Meeting of the Consortium on Revolutionary Europe.  Georgia State University, 26 February 1993.

Otero, Christopher.  “Reflections on Clausewitz and Jomini: A Discussion on Theory, MDMP, and Design in the Post OIF Army.” Small Wars Journal (May 2011).

[14] The top half of Figure 1 is found as Figure 2-1 in Department of the Army, ADRP 3-0: Unified Land Operations, Washington, D.C. (HQDA, 16 May 2012), 29.  The bottom half of Figure 1 is my interpretation of how the relative weights of the military theories compare to the weights of effort among the elements of decisive action.

[15] The top half of Figure 2 is found as Figure 2-2 in Department of the Army, ADRP 3-0: Unified Land Operations, Washington, D.C. (HQDA, 16 May 2012), 33.  The bottom half of Figure 2 is my interpretation of how the relative weights of the military theories are applied across the phases of a notional campaign.