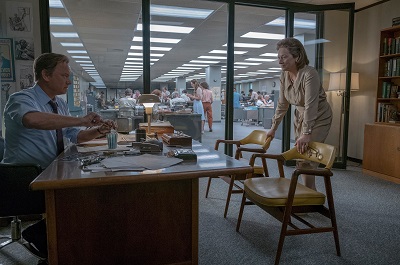 Every generation needs to be cognizant of those who fought for the foundation of democratic principles which they may presently enjoy.   There are many different forms of fighting.   How these battles are waged makes for essential historical reporting and often for gripping stories for the public.  The divergent types of confrontation and strategies used for victory have been transformed into entertainment in a construct the United States is world famous for…Hollywood movies.  Steven Spielberg has directed numerous award winning and popular films.   He has worked with A-list actors and master craft script writers over the decades.   Pairing Tom Hanks and Meryl Streep together for the first time as the intrepid Ben Bradlee and Katherine Graham of the Washington Post, was an inspired commercial idea.   Especially given the controversies generated in the last few years over what constitutes “real news”.

However, since the film weaves in an around a story which was told so masterfully in both book and movie form, “All the President’s Men”, it is difficult to view this film without comparing them.   Alan J. Pakula, with his skill at creating cinematic suspense and eliciting riveting, authentic performances from the actors; took what was essential from a series of events to convey and engage an audience.   Steven Spielberg seemed to be preoccupied with getting the historical set details correct and under pinning the facts with his current political leanings.

The script relied on several scenes where characters spoke about their prejudices and tactics rather than presented them for the audience to digest.  The advertising and media hype pressed the importance of Katherine Graham as a central figure and of Meryl Streep as the grand dame who would portray her.   But, having worked for Jack Anderson and Les Whitten during the 1970s, and seen the real Katherine Graham and Ben Bradlee, it was disappointing to view this film.

We don’t expect actors to be “just like” the actual persons they re-create but we do hope the casting gives us someone who is near in likeness and mannerisms or who is skilled enough to try and present these icons from recent history.   Katherine Graham was known for her subtle grace, her quiet but firm navigation and her constant loyalty to Ben Bradlee and “the boys” of her organization.   She was not a finger biting, head down, quiet spoken woman.   She was not arrogant.   Katherine Graham was wounded though she carried herself upright despite those slings and arrows of tragedy in her personal life.  Meryl Streep seemed to use her tried and worn shtick to get through this performance.  There was no real chemistry with “the boys”.   She appeared to be either intimidated or above them and she trudged through her role with very little grace.

Ben Bradlee was naturally brash, witty, incisive and seemingly confident in his every action and gesture.   He was quick, bold and didn’t worry about being “likeable”.   He was demanding and exacting and a leader of the pack.   Tom Hanks made an effort to be some of these qualities of Ben Bradlee but overall, he came up short.   To my mind, Jason Robards created a much more compelling and genuine character for film.   Tom Hanks was uncomfortable in Ben Bradlee’s shoes.   He tried too hard to be naturally tough and was deferential to Meryl Steep’s, Katherine Graham.   Their work together showed their efforts, showed them laboring as they recreated the scenes of work at the newspaper. The best performances are ones which appear effortless.

Overall this film seemed hastily put together.   The slant and shots of former President Nixon as a lynchpin for their battle was completely overstated and inaccurate.  While today political correctness policing has installed a kind of internal shudder at remarks considered “sexist”, in the 1970s these remarks were casual and common.   In order to be a female leader in the 1960s-1990s, you had to have a thick skin and Katherine Graham did.

“The Post” was a vehicle for Steven Spielberg, Tom Hanks and Meryl Streep to work together.   The actual mission of the Washington Post and the pivotal leaders in Ben Bradlee and Katherine Graham, to investigate, validate and disseminate news, was and is far more important. People actually working at that media organization in those days knew it.   Yes, there was competition with the New York Times but there was also a deep belief in the crucial and audacious mission of keeping American institutions accountable.  Unlike today…but therein lies another story and perhaps later, another film.

This film was entertaining and at times, informative.  Certainly worth watching once.

Jo Patti worked as an investigative reporter and script writer for Jack Anderson and Les Whitten on their projects, “The National Suggestion Box” and the “Good Morning America” TV show in the mid 1970s.  Her name at that time was Joanne Munisteri.   Her first creative non-fiction book, “Getting Off the X” will be released on April 27, 2018 by Di Angelo Publications.