In order to advise our way to a more sustainable partner, we must continue to address one of the main issues plaguing our Afghan partners in their fight against the Taliban.  It is frustrating to watch the ongoing adult version of “capture the flag” play out on the battlefield in Afghanistan.

Leaders and fighters on both sides of the conflict, including the Afghan National Defense Security Forces (ANDSF) and the Taliban, fight with a certain mindset, and despite our best efforts, the U.S. military has yet to break our partners of their Eastern way of fighting.

While the U.S. military prides itself on thinking with a Western mindset of “fire and maneuver,” offensive warfare, and decisive battles, Afghans continue to view their fight through an Eastern lens often consisting of deception, guerrilla tactics, standoff, and misdirection.  This mindset of standoff and “death by a thousand cuts” lends itself to the creation of a bunker mentality that’s plagued the Afghan Army and Police force for over a decade and a half. 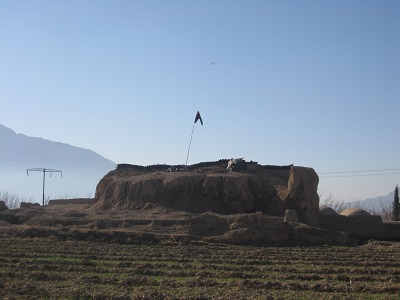 The challenge exists in the understanding that this mindset is part of their culture.  The way they fight is reflected in the day to day mannerisms and occurrences in Afghan life. The libertarian nature of an Afghan man and his family nested with a strong pull to provide security necessitates strong defenses and tall walls.  Those who have stood at the base of a qalat, or tall mud fortress, and gazed up at its sometimes twenty to forty-foot walls and caste-like parapets know exactly what I’m referencing.

Afghan men literally live like a “king in their own castle,” no matter how muddy or desolate.  It’s theirs to defend and theirs to dominate.  To own a “compound” opens the gate to manhood and an independent life.  It becomes a place to stash all the things one values in a simple life near the bottom of Maslow’s hierarchy of needs: a woman, livestock, children to help farm, and probably an AK-47, some ammunition, and a chest rack, just in case. 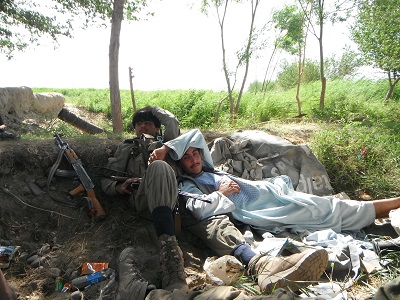 To an Afghan, the focus on seizing and retaining perceived key terrain is second nature.  Enter the bane of the tactical to strategic American leader’s existence: the Afghan checkpoint.  Even the words “Afghan checkpoint” likely evokes an image emblematic of the phrase, but also unprofessional in its appearance.  The typical checkpoint consists of 6-8 men, mostly wearing a partial or non-existent military uniform complete with cheap flip flops, a stray dog or two, a kettle to heat chai tea, random piles of trash, and possibly one guy wielding a knife, although not in defense of his buddies, but to bleed out the chicken they’ve procured in preparation for their next meal.  Lastly, hoisted up at the checkpoint by a stick or flying in a nearby shade tree, you’ll find a black, green, and red Afghan flag, flying proudly over their small “fortress.”  It’s a sight many veterans of this war and the war in Iraq are familiar with but provides little to no value to the fight when left alone, to their own devices, poorly supported logistically, and without leadership to instill a sense of pride in their mission.  In fact, it often has the opposite effect.

The problem with this unsightly image is the Afghan checkpoint is the most visible part of the Afghan military the population observes daily.  It not only creates a false sense of security but presents an unprofessional appearance to the Afghan populace that constantly serves as a “first impression” of sorts when civilians engage the ANDSF at their static sights. 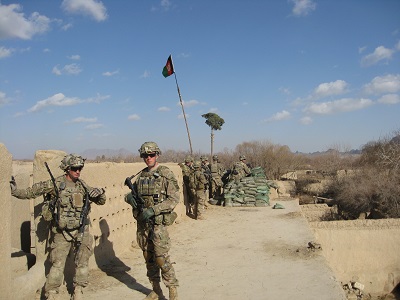 The Afghan checkpoint is the creation of a static position constantly putting the ANDSF on the defensive, rather than on the offensive and engaged more with the local population while separating the Taliban from the people.  Persistent presence is a lacking key ingredient to legitimizing the supported government.  This cedes the initiative and the offensive part of the “capture the flag” game to the Taliban.  Some checkpoints are necessary to control choke points in support of a larger, coordinated effort to secure key urban areas and infrastructure, including the roads leading to Kabul.  However, there must be an evaluation of the existing checkpoints and seek reductions and consolidations in an effort to gain efficiencies and free up sorely needed combat power.

Afghan leaders must acknowledge detrimental facts of the defensive “bunker mentality.”  Terrorists, smugglers, and criminals easily move around fixed sites, staying in checkpoints make the population and the security forces less safe, and fixed sites separates the ANDSF from the people by focusing on occupation of seemingly key terrain rather than population centers

Checkpoint reduction frees up manpower to apply towards pressuring the enemy rather than unnecessarily fixing talent to checkpoints.  Checkpoints rarely identify or prevent enemy reconnaissance elements or their staging areas prior to kinetic activity.  They generally fail at disrupting the enemy, prevent the enemy from amassing large forces against them, or get inside the enemy’s decision-making cycle.  Afghans cannot reduce casualties, specifically civilians, by building small forts in remote locations, when the local populace lives outside the walls of the small forts; the same people the uniformed service members are supposed to protect.

Advisors must continue to advocate for a change in the mindset.  Offensive operations and clearing forces require coordination, resources, and synchronization often eviscerated due to last minute perceived emergencies to react to the most recent check point or district center attack.  It draws collection platforms away from higher priorities to focus on less strategic locations.  These situations are often caused by the failure of the defensive posture of the ANDSF failing to pick up on the indications and warnings their activities should have gathered. 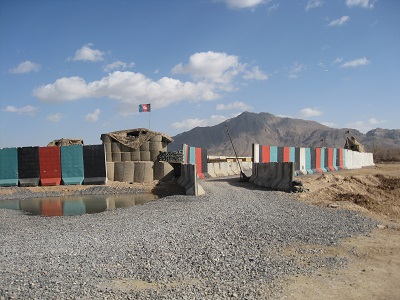 Afghans must realize while on the initiative, they cannot stop of the heels of taking losses.  We must assist them in that crucible moment to understand a loss in momentum and desire to start building permanent fixed sites only lends itself to future failure by not meeting current objectives, causing further casualties.  They must resist their default settings.

Advisors should assist the Afghans in pushing through these key friction points, reassuring them casualties happen as much on the defense as they do while on the offense.  If they remain focused on seizing and maintaining the initiative, and see the effects on enemy networks, the value proposition for offensive operations, including pinpoint raids and area clearances, will become self-evident over time.  This capability and operational focus cannot reside squarely on the shoulders of the 20,000 or so Afghan Special Operations Forces for it to be effective nationwide.

Finally, an overabundance of checkpoints, of which there are approximately 4,000 or more across the country, cumulatively contributes to a reactive mindset and sets the stage for a narrative of ineptitude and defeat on the international stage.  Unnecessary and unsupported checkpoints present the enemy with 4,000+ opportunities for negative information operations (IO) and highlight failures of ANDSF through daily social media posts of overrun checkpoints, mangled bodies of forgotten Soldiers, and captured equipment, often supplied by the U.S.  At this point in the war many believe to be a stalemate, the narrative is likely more valuable than the facts on the ground, and the side able to best control it has the upper hand in the court of public opinion.

Advisors must show the Afghans that building checkpoints rarely solves systemic problems creating instability in an area.  Checkpoints often reside far away from urban centers and cause unnecessary strain and inflict unrealistic logistical demands which are unsustainable by the overall Afghan military apparatus.  This allows the Taliban to pick off checkpoints one by one, isolating them from the population, bribing and intimidating them into turning a blind eye to enemy activity, and eradicating any positive intent of their existence.

Unfortunately, over the past 18 years, the U.S. military, myself included, is culpable in contributing to this mentality.  We’ve enabled the Afghans by supporting their desires to construct more checkpoints.  I vividly remember a time during the Afghan surge, village stability operations, and the establishment of the Afghan Local Police when the equipment of highest demand to ground forces was bucket loaders, T-walls, and Hesco barriers.  A company commander could almost write his own success indicative in how many checkpoints his unit built over the course of a deployment.  While we have altered our own course, there is still much work to be done to help alter this mindset in the Afghan military culture.

To break out of the “fortress mentality,” advisors must assist their partnered forces in focusing on capturing black ISIS-K and white Taliban flags rather than solely protecting their own, requiring a much more dynamic posture.  This will not happen overnight due to it being embedded in their culture.  However, without security force advisors helping to evolve this mindset, change how conventional Afghan units execute day to day operations, and continue to reduce unnecessary static positions, the country, like their checkpoints, will likely be overrun if or when we eventually draw down our advisory forces.