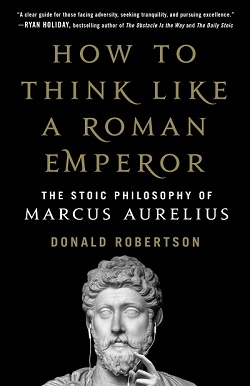 I was blessed to be introduced to Stoic philosophy during high school. While I struggled to fully understand Stoicism as a teenager, I realized its deep value. Stoicism is a philosophy uniquely suited to Soldiers and military leaders. When I deployed to Iraq in 2009, I took a single book with me from home. The Meditations by Marcus Aurelius was not only useful to myself but was passed around my platoon and inspired many of my Soldiers. It shouldn’t be a surprise as this text has been used by countless military leaders for millennia. If my sons ever march off to war, I will hand them the copy of the Meditations along with another book that might prove to be an even more powerful introduction to Stoicism. Donald Robertson recently composed a book called How to Think Like a Roman Emperor. It is a unique book that I wish would be given to every junior leader in our ranks.

While this book is only 269 pages long, it covers a remarkable breath of useful topics to military leaders. Topics include how to deal with emotions like the fear of death, anger, desire, and anxiety. It offers practical exercises to reduce negative behaviors and bad habits while replacing them with character building and virtue driven activities. Psychological methods for pain management are also suggested. This book uniquely combines history, philosophy, and psychology in a way that is both entertaining and extremely useful for the self-development of the reader. This is not some cheap “self-help” gimmick but a true manual of self-development. Robertson has an interesting way of leading readers through a journey of how Stoic philosophy works, how it was utilized effectively by Marcus Aurelius, and suggests practical exercises to utilize these methods in the reader’s own life. Not only are Robertson’s suggested exercises backed by a 2,000-year-old philosophy but he also supplies the current psychological theories and terminology that demonstrate these exercises to be effective. This book would be infinitely more effective in building resilience within our Soldiers than the current Master Resilience Training that hides the correct psychological terminology for exercises and largely treats Soldiers like children.

Robertson offers an interesting solution to the poor or absent mentoring that is available to Soldiers. He suggested readers write down the virtues that are displayed by those they most admire. In the absence of these individuals, readers are called upon to imagine these individuals constantly watching their activities. In this way, he suggests the use of “invisible” mentors that we could imagine their responses and guidance as we go throughout our day. It is an interesting concept that we might ask ourselves “What would _____ do?” (Fill in the blank with any great military leader or mentor. i.e. What would Eisenhower do?). We might find that we will change our own behavior to better display the virtues we most admire in others.

I don’t think I can sing praises high enough for this book as there is so much content that is directly relevant to military leaders. This book follows a Roman Emperor that served as a general in not only border wars but through a civil war. An interesting comparison of his and his rival, Avidius Cassius, leadership styles and their influence on the Roman Legions is also provided. Even an interesting story on how Roman Infantry marched into a known ambush on a frozen river to utilize a new tactic that allow for the defeat of Sarmatian cavalry. This book also will expand the readers concept of Marcus Aurelius himself. Most are introduced to him through the Meditations written when he was already an aged man, and most will imagine him in advanced age dressed as a philosopher. But this book reminds us he was trained in his youth to fight by gladiators and was essentially a Roman knight.

The author Donald Robertson is truly an expert in Stoic philosophy and Cognitive Behavioral Therapy (CBT). He has over 20 years of experience in psychotherapy and even ran a training program for other therapists. He has published several other books concerning the use and connections of Stoicism and CBT. I was fortunate to have the chance to interview him on the utility of Stoicism in building resilience in our Soldiers when I was creating an article and video series: Leaders’ Guide to Addressing Suicide. In our interview and in this book, he explained that Stoicism is focused on building virtue and isn’t the pop-culture stoicism (little “s”) the refers to the unhealthy suppression of emotion. I deeply appreciate him allowing me to take an early look at this amazing new book. For more information on Stoicism, He offers a number of courses from his website, hosts a Facebook Group, runs a YouTube channel, and can be found on Twitter: @DonJRobertson.

Donald Robertson made the old new again with this book. It is time the military does the same. If we want to see our Soldiers driving their actions through virtue and displaying incredible resilience to physical and psychological stress, it is time we reintroduce the formal study of this philosophy in our ranks. This over 2,000-year-old philosophy has stood the test of time and offers so much to military leaders that it is nearly unmatchable by any other philosophy. Until the Army as an institution recognizes and supports the value of Stoicism, you will find me handing copies of How to Think Like a Roman Emperor to the junior leaders within my ranks.