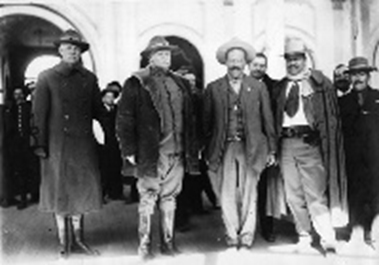 While keeping a cautious eye on British and French losses at the battles of Verdun and the Somme, America’s Army deployed deep into Mexico in pursuit of the Mexican presidential contender / bandit Pancho Villa. President Woodrow Wilson had issue Brigadier General John Pershing clear orders to capture Villa and bring him to justice for his cross border raid on Columbus, New Mexico. After a yearlong, unsuccessful pursuit, and at risk of real war with Mexico, America withdrew and reoriented itself to fight the Kaiser’s army in Europe.

In 2019, with America keeping a cautious eye on Russia, China, Iran, Venezuela and North Korea, American troops are pursuing jihadists in Afghanistan, Syria, North Africa, and Yemen, to name a few. Unlike its predecessors, and despite tremendous technological advances, America’s contemporary military is less capable of reorienting itself to meet emerging threats than it was a century ago. Unlike Wilson’s clear mandate and endstate, American forces fighting the war on jihadists are entangled in a variety of political and ephemeral social reform efforts loosely associated with more pragmatic objectives to deny terrorist safe havens.

Principally in Afghanistan and Iraq, the US Military is beset by the challenge of building a competent government, national security force, and re-engineering fundamental elements of Afghan and Iraqi society. It is tasked with introducing and implementing the kind of enlightened liberalism western societies take pride in and that eastern societies despise. In Syria, it is enmeshed with Kurdish aspirations for sovereignty and at odds with the national interests of its NATO ally Turkey. The US Army, for example, has ransacked the equipment, leadership and personnel of several of its combat brigades to create security force assistance brigades in an effort to make them more adept at developing governmental competency and training indigenous forces. It would be no small feat to redeploy them, return them to combat competency and deploy them into a conventional war. In sum, America cannot just march back over the US border and orient itself on a new war. But it could if it tried.

If American policymakers were to simplify the objectives of its military adventures it would not only limit the costs in blood in treasure, it would render the military more able and ready to address the existential threats to American national security, relieve the American people’s exhaustion with persistent war, and improve the prospects for decisive victory in theaters where it has proven so elusive. When the CENTCOM commander, a steely eyed American warrior, tells the world that He's redefined victory as sustaining the status quo, you know the policy is wrong.

America needs to reconsider and adapt the principals of the punitive expedition. America’s sincere reason for overthrowing the Taliban in 2001 was for retribution for the September 11 attacks, attended by the additional benefit of denying safe haven to the real perpetrators of the attack. There is nothing wrong with that. Its later, ill-conceived campaigns in Iraq and Libya were also punitive in intent, but in each case, political leaders embarked the US on futile efforts to brand those campaigns as something else. As a result, America has embarked on nation and society building efforts that have imposed tremendous costs on America’s military and the society it serves.

While Wilson’s singular objective was not achieved, and Villa himself was never brought to justice, his Division Del Norte was defeated and dispersed across Mexico and Villa was never able to repeat his attacks on American soil. America also decisively demonstrated its dominance over North America, and its military learned lessons about itself that would prove valuable when it found itself arrayed against the German Imperial Army.

Most importantly, America was able to disengage when it needed to and rapidly redeploy its forces. Pershing returned to the United States, cobbled together another expeditionary force, deployed it to France and started to fight eight months after leaving Mexico. This in the age of telegraph, carrier pigeon, and horseback. America in the age of internet, wireless networks and jet propulsion would be hard pressed to withdraw its forces from Afghanistan, Syria and Yemen, organize itself and have its troops fight in a global, multi-domain fight within that same time frame.

Policymakers must disencumber America’s military from the morass of two decades of nation building and social engineering. Like Wilson did with Villa, contemporary policymakers must accept that perfect completion of its overabundant objectives is the enemy of good enough, that it is wiser to abandon the impractical in order to address the essential. Afghanistan’s government and security forces are as good as America can get them. The Kurds will fight with Turkey, Iraq and Iran for sovereignty whether America intervenes or not. The Saudis, like the Afghans, are as good as American arms and training can make them, and must tackle the Houthi rebels and Iranians in their own fashion, and with their leadership. America must be free to prepare itself for the threats it has identified in its own National Defense Strategy.

American troops have indeed learned a great deal and refined warfighting tactics and technology in the best laboratory available, but they are doing so at enormous cost to the nation. While the fiscal costs to the United States are astronomical and unsustainable, the most onerous cost is to American society. After two decades of persistent war, marked by only a handful of strategic successes, America is spent. The American public sympathizes with its military, but has lost any expectation of victory, and in most cases it is apathetic towards what its troops are doing overseas. It has lost its will for further martial exploits, and barring another catastrophe like the attacks on 9-11, will not be recruited in numbers large enough to fill the kind of military a global war requires.

The US Army’s struggle with recruiting to meet its current manpower demands indicates that recruiting volunteers for an even larger wartime military will be insufficient. Congress has ceded its authority to declare war so often, for so long, that it no longer attempts to have the kind of debate essential to a prudent declaration of war. It certainly has proven itself amenable to and tolerant of 19 years of military testimony that America must endeavor to persevere in conflicts that appear to have no end and an insatiable appetite for American lives and tax dollars.

The Punitive Expedition of 1916 is a historic example by which America should evaluate its war on jihadists. American policy makers must set the conditions whereby America’s military can abruptly withdraw from its current engagements, redeploy, stand up another force and deploy and fight anywhere in the world within ten months.