Normandy Beachhead - May 2019 – With Homage to Ernie Pyle

Normandy Beachhead, May 2019 – With Homage to Ernie Pyle 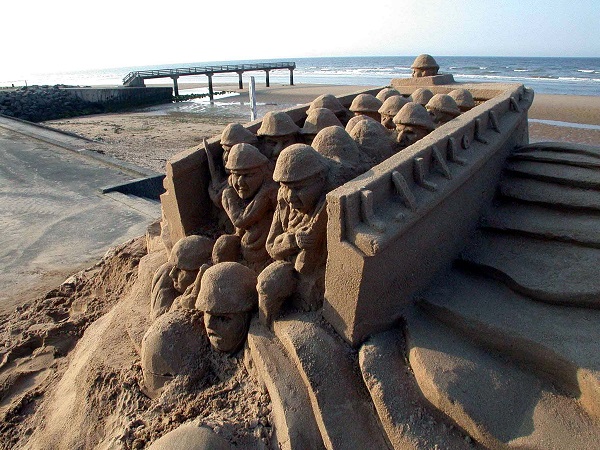 The beach today is broad, clean and filled with the life that Liberty bestowed 75 years ago.  As I walk, I reflect on what I read and what I heard from those that were here on that day of days.  An obscure and unremarkable beach stretches in a long light umber crescent.  It is bisected by several draws that allow penetration up the steep cliffside-now occupied by vacation homes and gardens.  Regardless, the sheer physical aspects of what was the scene then are easy to image now despite the dust of time.

As I walk the sand and dim my eyes, weaving into the filing cabinets of my mind, some images emerge that meld the past events with the present place.

Today is a lovely day for strolling along the seashore.  Men are sleeping on the sand, some of them sleeping forever.  Men are floating in the water, but they didn’t know that as they are beyond introspection or enjoyment.

Gulls dip and swirl and the sun sparkles off the receding foam.  Only an occasional craft passes across the scene and it is clear to the horizon.  But my mind sees the two thousand plus bodies and the hundreds of wrecked craft piled together along the shore-still too soon for the niceties of the Graves Registration and Naval salvage units to take effect.  And much too soon for my mind’s eye.

The wreckage is vast and startling. Both the material and human waste of war is a common denominator of conflict. But, here, in the compressed spaces of sea and cliff, those words-Waste and Junk- are most pronounced and supremely evident. This one great human endeavor proves that in such catastrophic and important human events, that everything is expendable in the pursuit of a larger objective.  They are just people and things and the price we pay for what we undertake.  Here on Omaha, that is a distilled and obvious fact.

Hidden by the cold dark bay, lies continuing evidence of both the waste and price of war.  Scores of craft, some ships and more than 30 duplex drive tanks rest in the same repose they affected on 6 June 1944.  Salvers occasionally dredge one up to decorate a museum or to turn into scrap, but on the whole, they remain in original repose.  A bill well paid for a greater cause.

The bones of their crews have long since been recycled into the sea, but their names reside forever in cemeteries and minds throughout our land.  The sea obscures the facts, but the memories remain.

Erasing the vestiges of time, we see trucks tipped half over and swamped.  Partly sunken barges, and the angled-up corners of jeeps, and small landing craft appearing half submerged.  As the tide recedes, the vast array of tetrahedrons, Belgian gates, concertina and Teller mine log barriers become visible-at least if one closes their eyes and allows the mind to conjure what history relates.

Where I walk, on dry firm sand, there are all kinds of wrecked vehicles.  Tanks that had only just made the beach before their demise-victims of a great imaginative  thought but lost in execution.  Jeeps are burned to a dull gray, their tireless rims resting half buried in the sand. Bulldozers, cranes and flatbed trucks are askew across the scene as in some huge modernistic sculpture garden.  .

Scattered amongst this are wrecked halftracks and deuce and a halves, still shedding the purpose of their owners.  Aid bags, type writers, ordnance tools, bedding, stacks of weapons, telephones, switchboards and cases of grenades lie strewn around them and visible through gaping shell holes.  Maps and papers flutter and dive with the wind. When the light hits at a specific angle, viscera, body parts and a reflective shine of iron red ochre shows. Battle is decidedly untidy and this is a supremely untidy place.

Everywhere are discarded life belts, gas mask containers, telephone wire, helmets and weapons.  They all lay on the sand and roll with the whims of the tide.  Interspersed are the parts and pieces of the previous occupants, an orange, a photograph, ration boxes, a half rent shirt, a letter soaked beyond comprehension.  Between them all are spent field dressings, the occasional bandanna and parts and pieces of fatigues, the detritus of the effort.

Between exposed obstacles, bodies and parts emerge.  Some skeletonized by a sudden blast of flame. Others separated into many parts. A gaitered leg rolls and swims with the tide, its attachment parts no longer extant.   Only the living have had the ability to depart this place where order and process are yet to be introduced.

This place, if resurrected, could arm a reasonable nation.  Yet, we spend it without question as a trivial part of the bill to buy what we are and what we hoped others would be.  The people are forever lost but their spirit and purpose remains-they were and are Us and what we are all about.

A few hundred yards back of the beach is a near continuous high bluff.  Against its face, grass grows in thick clumps, interspersed with climbing white roses wending their way to the top. These trace the white tape of trail markings though the minefields bought at a great cost in limbs and lives driven by the necessity to get off this beach and onto the high ground.  The remnants of the initial surge lay in repose-some pointing the way for those more mobile and some beyond effort. The roses trace the tale.

Above, where the roses now end, on the first flat ground obtained, are a myriad of tent hospitals, filled to capacity.  Nearby are hasty prisoner of war compounds, casually guarded in the near instant of the moment before organized law and order arrives.  The occupants are the dazed, dumbfounded and scared remnants of their lost cause.  From here, you can see the vast panoply of the effort, lost to most in the mass of the effort.

Still further inland but still close, are a patchwork of hasty airfields.  Light spotter planes, fighters and the occasional Dakota medevac continuously enter and exit,  providing a symphonic counterpoint to the constantly rumbling artillery, both friends and unfriendly.  This a crowded and confused place, but it has a sinew of purpose that glues the greater effort.  It is the first sense of organization and structure welded to a purpose, something we do very well.

Beyond the horizon, the huge industrial juggernaut of fixed purpose and production begins to wend its way through the docks and airfields of England, soon to place more than a million men and their material at the disposal of General Eisenhower.  At home and at the places of production, workers stop, listen to the radios and church bells and bend harder to their tasks.  War is a highly wasteful thing and replacements are constantly demanded-both human and material.

The prisoners, leaning on the hasty wire enclosure, look out to the largest single purpose armada ever assembled. This vestige that was for so long empty is now so occupied. They look and wonder-Once it was “When will they come?” Now they have and each reflects inwardly-“How could we have thought what we did?”

Perhaps if their superiors had the ability to conjure what they now see, the beach would have been unrented and our pool of humanity markedly increased.  But, it was not so then and not so now.

The walk concludes with the sun and surf disappearing from view.  But the memories and purpose do not fade.  This place is a sandy sepulcher of the noblest aspects of the human spirit. Its memory hopefully insures that its images may never again have to be repeated.