It is often asserted that contemporary insurgencies differ dramatically from ‘classical’ manifestations, with the collapse of the Berlin Wall providing a convenient demarcation point. Whilst ‘new wars’ are most closely associated with the work of Mary Kaldor from the London School of Economics, this brief article reflects more broadly upon a wider literature that seeks to distinguish modern campaigns. The following represent frequently identified traits:

• Extensive application of violence against civilians – Depending upon the interpretation this may refer to either an elevated usage of ‘wanton and senseless’ violence amongst modern insurgents, or a more rationally based increased reliance upon coercive methods through which these groups aim to control the behaviors of the populace.[ii]

• Hostilities across ‘identity-based cleavages’ – This refers to the reported rise of grievances across religious, ethnic, tribe, and clan divisions (as opposed to class divides), with the cases of Rwanda and the former Yugoslavia often cited from the immediate post-Cold War context.[iv]

• Rise of criminal motives – Cases such as Colombia and Sierra Leone are often cited as examples where economic gain has become an objective in itself, rather then the means to a revolutionary end.[v]

• Primarily urban-focused – This reported trend reflects the elevated relevance of cities in the context of continued urbanization, and given the extent to which technology has ‘shrunk’ the mountainous and forested wildernesses that often provided cover for ‘classical’ insurgents.[vi]

Insurgency is intimately associated with the evolving societies from which it arises, thus it is undeniable that its nature changes. However, whilst generic conclusions about ‘new wars’ may be accurate in broad terms, at best they tend to obscure the nuanced patterns that are apparent between cases. At worst, a number of the assertions about specifically identified ‘contemporary traits’ may even be incorrect.

Testing the Assertions of Change

In Figures 1 and 2 four of the identified traits are scaled from ‘classical’ to ‘contemporary’, with the symbols representing the approximate location of prominent groups from the Cold War and post-Cold War periods. The information has been drawn from a wide range of open source materials, and in-country research in the cases of Afghanistan, Peru, Nepal, and Iraq. 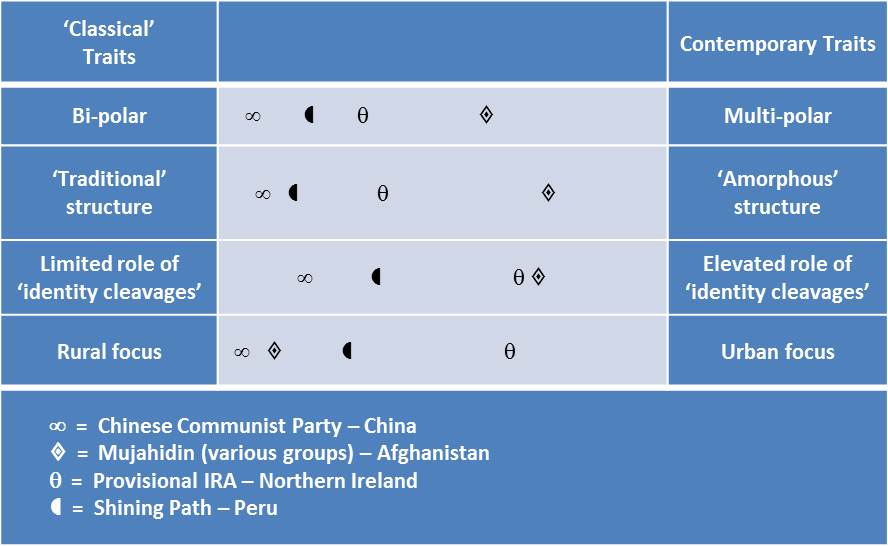 Of course, such scales are naturally contentious, and even amongst case study specialists the location of each symbol would generate considerable debate.[vii] The subjective element implicit to this analysis is perhaps most immediately apparent in considering that any judgment on the rural or urban focus of an insurgency must incorporate the locations of territorial ‘control’, bases of support, and acts of violence, and must weight the comparative importance of these factors. Additional complexity also arises as the urban emphasis is commonly a function of time, for instance, with Maoist-inspired campaigns aiming to ‘surround the cities from the countryside.’ 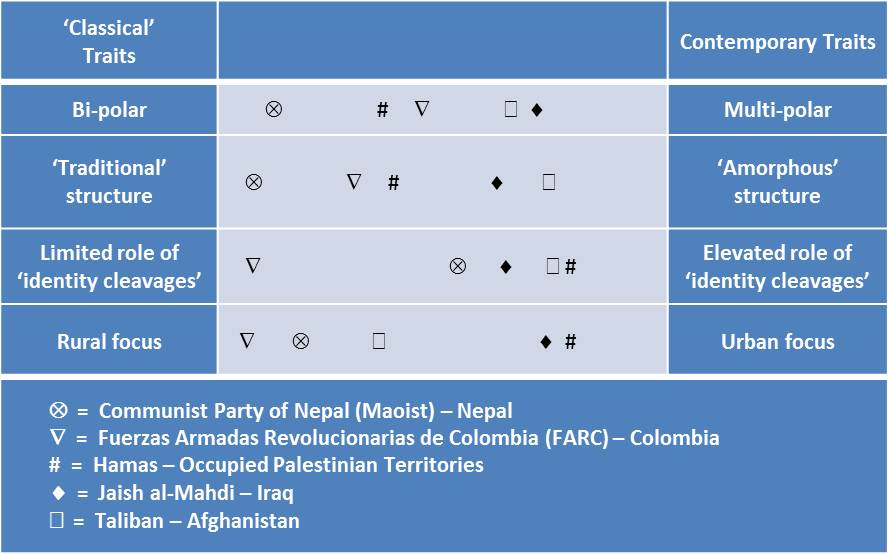 These caveats aside, Figures 1 and 2 suggest a number of important patterns. Firstly, amongst the five selected post-Cold War groups there is seemingly a limited shift toward the ‘contemporary’ characteristics identified within the ‘new war’ literature. Secondly, however, a far more pronounced trend is the considerable range of both ‘classical’ and ‘contemporary’ traits displayed during the two distinct eras. In other words, irrespective of the epoch it is possible to identify campaigns that are essentially bi-polar and multi-polar, insurgents that are ‘traditionally’ and ‘amorphously’ structured, and so on. Thirdly, a number of the selected cases demonstrate a notable diversity in terms of their characteristics, perhaps most apparent with the Provisional IRA, the FARC, and Hamas.

Finally, if the ‘new wars’ thesis is taken at it simplistic face value, certain insurgent groups appear to have fought during the ‘wrong’ era. The mujahidin opposition to the Soviet occupation of Afghanistan was multi-polar in that it involved numerous funders (the US, Saudi Arabia and China amongst the major donors) and seven recognized recipient parties. Within these parties, the insurgents themselves were comprised of a multitude of factions based largely upon regional, ethnic and tribally loyalties, commonly operating with amorphous chains of command. Identity cleavages also played a prominent role in the sense that to the Afghan fighters this was interpreted as a religious or ethnic campaign against the Soviet occupation.

Conversely, the Nepali insurgents relied upon a ‘traditional’ structure in the Maoist model, and fought essentially a bi-polar campaign against the state security forces during the 1996-2006 ‘People’s War’. Whilst privileging the ‘class struggle’ in much of their rhetoric, their support was generated to a considerable extent at the local level through their campaigns to empower marginalized ethnic and caste groups. And, despite adopting an Kathmandu-focused doctrine in 2001 (known as the ‘Prachanda Path’), and the elevated role of urban strikes (‘bandhs’) prior to the fall of the regime in 2006, the campaign essentially remained rurally-based in accordance with the Chinese model.

How can these patterns be explained? What appears to be an overstatement in the actual levels of evolution of insurgency is undoubtedly attributable to problems frequently associated with small-N research. More specifically, the ‘contemporary’ characteristics are often identified through a narrow focus upon a limited number of prominent cases such as Afghanistan and Iraq, whereas the ‘classical’ traits are disproportionately drawn from the likes of Malaya and Vietnam.[viii] Thus, at best, accounts that stress the distinction between ‘new wars’ and their ‘classical’ predecessors obscure pronounced variations between cases irrespective of the era, and at worst through focusing upon a limited number of examples they may identify ‘contemporary traits’ that do not reflect reality.

[vii] Indeed, two of the traits identified in the introductory text, the rise in the application of violence against civilians and criminal motives, have been omitted from Figures 1 and 2 due to hurdles associated with quantifying variables.

[viii] Of course, the findings presented in Figures 1 and 2 may well have been very different had an alternative range of cases been selected – but that is precisely the point.

James Khalil, PhD, is a senior consultant at Integrity Research and Consultancy, with a substantial experience of designing and analyzing perception surveys in Afghanistan and Iraq for organizations such as the UK MOD, NATO and USAID. He is also a specialist in insurgency, having led a variety of research projects into this theme with the UK MOD, and having recently complete a doctorate degree at the University of Leeds focusing upon how the Nepali Maoists generated support from the local populace during the recent ‘People’s War’.

James---what would think of this statement as a descriptive of the "new wars" regardless of region, reasons and it would include the DTOs/transnational crime organizations of the world.

"Complex adaptive systems do not play chess. They swarm, they self-organize, the evolve/adapt; there are phenomenon such as emergence, feedback loops, and the chess pieces and the board quickly mutate into novel combinations; the rules change while you play your version of chess."

An article criticizing the "21st Century War" and les nouveaux terroristes crops up on this site now and again. It is a sentiment I professionally agree with 100%. Unfortunatelly, year after year these articles rarely gain any traction beyond some immediate chatter. This is also seemingly so elsewhere in the military professional publication world (I'm not even bothering to speak to policy-types and their theorizing).

I am aching for a study to be done in the vain of what Dr. Khalil has outlined here. Such a study would reach back further than 20th century rebellions and examine colonial activity as well as domestic rebellions 18th century on. Perhaps even earlier, although a paucity of hard numbers might make an argument that reaches back that far less attractive to the technocraty that seem to be main brain-wave activity in real policy.