Mexico Is Not Colombia: Seeking More Productive Analogies for Responding to the Challenge of Violent Drug-Trafficking Organizations

Mexico Is Not Colombia: Seeking More Productive Analogies for Responding to the Challenge of Violent Drug-Trafficking Organizations

Despite the scope of the threat to Mexico’s security, violent drug-trafficking organizations are not well understood, and optimal strategies to combat them have not been identified. Regions around the world have faced similar challenges and may hold lessons for Mexico. One point is clear, however: Mexico is not Colombia. In fact, Mexico is not particularly like any other historical case characterized by “warlordism,” resource insurgency, ungoverned spaces, and organized crime. Despite the lack of a perfectly analogous case, security policy in Mexico stands to benefit from historical lessons and efforts that were correlated with the greatest improvements in countries facing similar challenges.  This article summarizes key findings from analyses comparing 10 different historical cases with Mexico.

Drug-related violence has become a very serious problem in Mexico. Violent drug-trafficking organizations (VDTOs) produce, transship, and deliver tens of billions of dollars worth of narcotics into the United States annually. The activities of VDTOs are not confined to drug trafficking; they extend to numerous other criminal enterprises, including human trafficking, weapon trafficking, kidnapping, money laundering, extortion, bribery, and racketeering. Then, there is the violence: Recent incidents have included assassinations of politicians and judges; attacks on rival organizations, associated civilians (i.e., the families of members of competing groups or of government officials), and the police and other security forces ; and seemingly random violence against innocent bystanders.

Our principal approach to answering these questions involved conducting a series of historical case studies and comparing the challenges they faced (and the solutions they found) to the security situation in Mexico. We then assessed the extent to which Colombia is a good analogy for Mexico and evaluated the relative merits of the alternative comparisons.

Policy is routinely informed by historical analogy, and policymakers regularly seek to learn the lessons of history. In commenting on the misuse of history, Ernest May concludes that policymakers frequently do not “pause to analyze the case, test its fitness, or even ask in what ways it might be misleading.” He continues, “Seeing a trend running toward the present, they tend to assume that it will continue into the future, not stopping to consider what produced it or why a linear projection might prove to be mistaken.”[ii] In this context, the challenge is to identify the correct comparisons. If the violence that haunts Mexico is similar to the conflict that the Colombian government stared down, then Plan Colombia may indeed be a reasonable blueprint for dealing with Mexican VDTOs. However, if these two cases are qualitatively different (as we believe they are), then they would require at least partially different solutions. What, then, are the correct comparisons? What are the correct characterizations of the challenges posed by Mexico’s VDTOs, and which historical cases have the most in common with these contemporary challenges and can thus best inform an evaluation of Mexico’s policy options?

Colombia is often offered as an analog for Mexico,[iii] but it has also been derided as an inappropriate comparison.[iv] While Colombia certainly faced a challenge from VDTOs, both the circumstances and the threat differed from contemporary Mexico in several important ways: the nature of the perpetrators, territory, geography, targets, and tactics; the character of the violence; and the state’s ability to respond. For these reasons, we join critics in rejecting Colombia, by itself, as the most instructive analogy for Mexico.

Resource insurgencies are cases in which insurgents do not seek to win control of the state or establish their own government but simply to eliminate state interference with their exploitation of natural resources (such as diamonds, drugs, or timber). Cases of warlordism or ungoverned territories are similar to resource insurgencies, but in these instances the state does not sufficiently combat the rejection of its authority to earn the case the insurgency label. Whether or not they have become something more, Mexican VDTOs are certainly an instance of organized crime, so previous efforts to combat organized crime might provide fruitful analogies. Specifically, when governments have actively opposed organized crime in other places and times, what has proven effective, and what pitfalls have been encountered?

By examining selected cases of warlordism, ungoverned spaces, resource insurgencies, and efforts to combat organized crime, we can identify which cases are genuinely analogous to contemporary Mexico (and in what respects) and which approaches to meeting these security challenges have proven successful or unsuccessful.

Figure 1 outlines the case selection process that we used to identify the ten comparative cases. See the full report for a more detailed explanation of the process. Table 1 lists the ten selected cases. 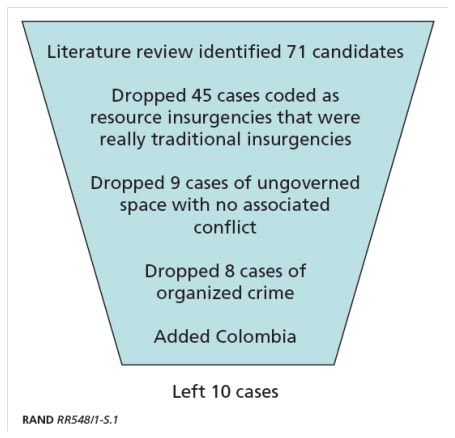 Although all the cases have elements in common with Mexico and individually offer cautions, advice, or lessons for future Mexican security efforts, broad comparison remains somewhat tricky. We selected cases that fell into the four common categories mentioned earlier (warlordism, ungoverned spaces, resource insurgencies, and organized crime), but the detailed case studies (presented in detail in the second study volume) revealed a wide range of challenges and solutions. Thus, there is no simple way to take the combination of efforts that “solved Colombia” and compare them with the efforts that “solved the Balkans,” then extrapolate a recipe for success in Mexico. However, with a little extra nuance and complexity we were able to compare how similar challenges were addressed more or less effectively across the historical cases and, where Mexico faces those same challenges, infer which solutions might work (or are more or less feasible than others).

Table 2 lists ten challenges (designated A–J) that appeared in many of the historical cases. Mexico faces eight of these challenges. The columns in Table 2 represent the historical cases (with Mexico in the last column), while the rows of the table are paired. The upper row of each pair shows the extent of the challenge at the peak of the conflict, and the lower row shows the extent of improvement or progress toward addressing the challenge at the end of the case-study period, usually the end of the conflict. So, for example, the uppermost and leftmost cells of the table indicate that Colombia suffered from high levels of violence (challenge A) to a moderate extent (amber) at the peak of the conflict there, but violence improved moderately (↑, to green) by 2010.

Table 2: Challenges and Improvement in the Historical Cases 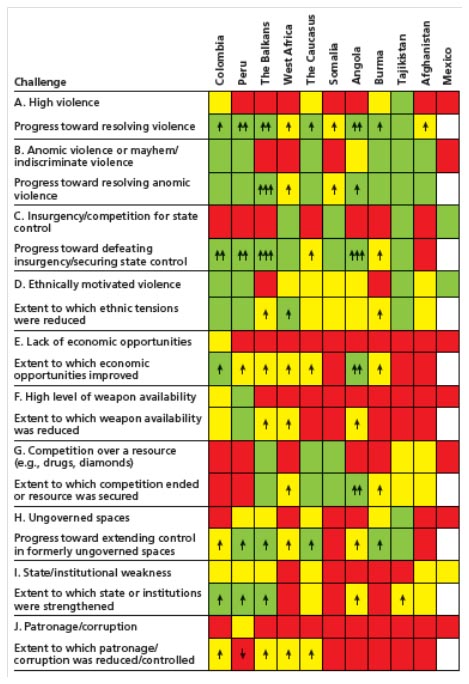 Table 2 also summarizes the comparative core of our analyses, showing which historical cases faced which challenges (and the extent of those challenges) in common with Mexico—and against which of those challenges each government made progress or failed to make progress—allowing us to thoughtfully identify instructive points of comparison.

Mexico Is Not Colombia, Nor is It Any of The Other Cases

Through this research, we sought to identify the best possible comparative cases to use to make analogies to Mexico. We began with the observation that Mexico is not particularly analogous to Colombia, even though Colombia is the most frequently invoked comparison case. However, we are forced to conclude that none of the other cases we examined are much more analogous, and some are notably less so. That said, all the cases, including Colombia, share some important contextual commonalities and challenges with Mexico and thus provide useful lessons. The trick, then, is to isolate the aspects that provide the best opportunities for comparison and remain mindful of the differences. While there is not a single premium analogous case for Mexico, we identified several cases that should compete with Colombia as partial analogies in future policy discussions: Peru, the Balkans, West Africa, and the Caucasus. The remaining cases are much less analogous to Mexico but still provide lessons in discrete areas, even if their primary value is in serving as negative examples.

Lessons Highlighted in the Case Narratives

Each case study, regardless of whether it proved to be a particularly good comparison case for Mexico, offered some useful lessons, even if only as an example of what can happen if challenges like those faced by Mexico are allowed to run unchecked. Here, we summarize those lessons, with supporting cases listed in parentheses:

Factors Contributing to Improvement in the Historical Cases

As part of the cross-case comparative analysis, we coded a number of factors related to strategies or efforts that were undertaken to mitigate challenges in the historical cases. We then examined the correlation between the presence of those efforts and progress toward resolving the selected challenges for cases in which a given challenge was present. Although the number of cases involved is small enough that we do not report specific correlation coefficients, Table 3 does indicate where we found a strong correlation between earnest efforts in an area and improvement toward resolving one of the challenges.[vi] Shaded cells indicate strong correlations.

Table 3: Efforts Consistently Correlated with Improvement in the Historical Cases 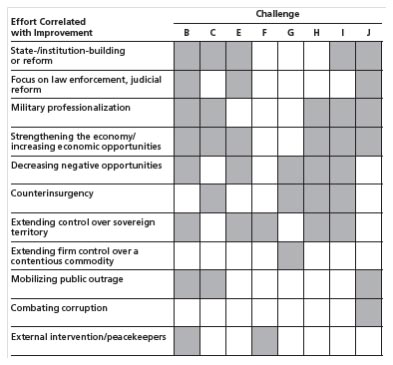 However, correlation is not causation. In many of these relationships, especially given the frequency with which individual challenges are correlated with multiple areas of effort, correlations could be spurious, with the relationship depending on some third factor. To hedge against this possibility and get closer to causation, we sought to use the narratives to confirm these relationships. For each relationship, we used the case narrative to test the sequence of the relationship (that is, to confirm that the purported cause did, in fact, come chronologically before the improvement in the challenge area). We then identified the extent to which the relationship contributed to the narrative explanation of the case, validating its presence as part of a plausible causal argument. Table 4 presents the results of this validation exercise.

Table 4: Efforts That Contributed to Improvement in the Historical Cases 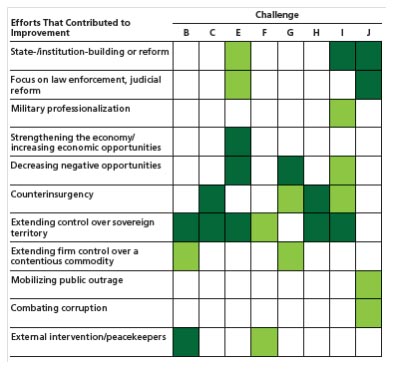 As anticipated, several of the correlations observed proved to be spurious correlations in one or more of the cases, lagging improvement in one or more challenge areas rather than preceding it. Others, while present as correlations, were judged not to be important contributors to the resolution of challenges in a significant number of cases. Table 4 shows only those efforts that were confirmed as important contributors to improvement in the listed challenge areas in multiple cases. In the table, light green shading indicates that the effort was validated as contributing to improvement in some cases, while dark green shading indicates validation as a strong contributor.

Collectively, the historical narratives, the comparative analysis, consideration of the Mexican case in its own context, and a review of existing proposals and suggestions for Mexico in light of the lessons gleaned from the historical cases point to the following broad recommendations for Mexico’s government to consider in its efforts to address the country’s current security challenges:

Note that we are not the first to make these recommendations. However, the fact that our empirical research echoes them is a strong endorsement indeed.

[i] The content of this article is copyrighted by RAND and published here with permission.

[ii] Ernest May, “Lessons” of the Past: The Use and Misuse of History in American Foreign Policy, New York: Oxford University Press, 1973, p. xi.

[vi] We coded many other factors that did not yield a correlation and thus are not reported in the table. Noteworthy in this regard are drug crop eradication efforts and specific strategies for dealing with an adversary (e.g., organizational decapitation efforts, focusing on groups one at a time, focusing on all groups simultaneously). This is not to suggest that those factors were not important in individual cases (indeed, the detailed case narratives suggest that some of these factors are important); they were not consistently correlated with improvement across the cases facing the challenges addressed in this study.

Drs. Paul, Clarke, and Serena are researchers at the RAND Corporation.  The RAND Corporation is a research organization that develops solutions to public policy challenges to help make communities throughout the world safer and more secure, healthier and more prosperous. RAND is nonprofit, nonpartisan, and committed to the public interest.