…on December 28, Armando Oliveros bought a .50 caliber Barrett rifle from a gun shop in Phoenix. Five hours later, Oliveros allegedly crossed the border with the weapon through San Luis. According to Mexican officials, the rifle was recovered and taken from the gang member on January 11.

Police were able to trace it back to Oliveros after he allegedly purchased the gun for $10,300.

When confronted by investigators, Oliveros reportedly told them that he sold the gun in late January to a man who saw him shooting in the desert, but had no bill of sale. He also reportedly told police that he hadn’t been to Mexico since Thanksgiving.

Oliveros was arrested on February 23 and has been charged with forgery and weapons misconduct.

The weapon is capable of firing .50 caliber rounds, according to the manufacturer’s website, and is currently used by the U.S. and other military forces.

Police…pulled over their car near 7th Street and Bethany Home Road where police say Jonathan told them he was given $13,000 to buy the gun and was allowed to keep the remainder of the money as payment for the purchase. He allegedly admitted the rifle would be, “going south to Mexico and the Sinaloa Cartel.”

Police say Erica has a false address and lied on an ATF form stating the gun was for her. Jonathan reportedly said he was approached about a week before the straw sale and after finding the rifle on the internet, had his wife make the purchase.

… According to court paperwork, on March 20 just after 6:00 p.m., Erica Ibarra Alarcon, 22, was observed purchasing the Barrett 82A1 rifle at a federal firearms licensed dealer in Phoenix for $10,316. The rifle was then placed in the back of her vehicle.

…Per the police report, “Post Miranda, both Erica and Jonathan stated they purchased the rifle for another person and lying on the federal paperwork in order to buy the firearm”…

“Jonathan admitted the firearm would be going southbound to Mexico and the Sinaloa Cartel.”

…Gun experts say that this could have been a dangerous weapon in the hands of a cartel.

“The kick is enormous and incredibly loud to shoot,” said Anthony Enriquez, who adds that it packs a punch. “Basically, a round that’s made to go through walls, go through steel, go through almost anything you would consider impenetrable.”

The rifle is also a preferred weapon for cartels.

“They’d be using it against their own military, against advisers, like the United States of America would be using or sending over there,” said Enriquez.

…the rifle was recovered and impounded as evidence, along with the ATF form 4473. The Ibarra Alarcons face misconduct with weapons-trafficking, forgery, and sell/provide weapon for a felony charges. The ATF is looking into whether there will be any federal charges filed. 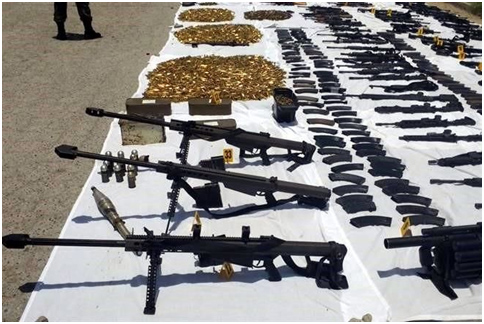 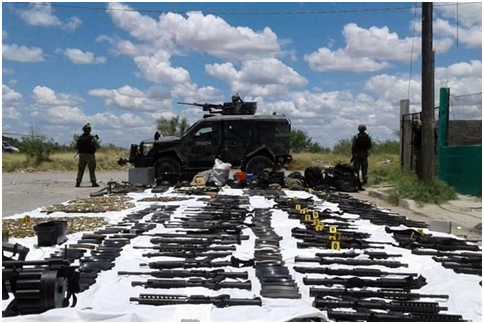 While patrolling in the border city of Nuevo Laredo, Tamaulipas, military personnel detected the presence of armed men in the vicinity of a home. When the men saw the military, they entered the house and fled through the rear… A large arsenal of high-powered weapons (was found) in the home including an anti-tank rocket; 13 grenades (12 were 40mm caliber and one was a handheld); 30,000 rounds of various calibers; 30 AR-15 rifle cartridges; 349 AK-47 rifle cartridges; and 20 military camouflage uniforms.

In a statement released by SEDENA (Secretaría de la Defensa Nacional or Secretary of National Defense), the seizure was made after personnel from the Eighth Military Zone in Reynosa noticed the presence of armed men in the vicinity of a property located in Colonia Toboganes, Nuevo Laredo… It should be noted that Nuevo Laredo is controlled by members of the CDN (Cártel del Noreste, or Northeastern Cartel), which is a splinter group of Los Zetas. There continues to be a power war in Tamaulipas between the faction and the old school Zetas who primarily operate in Ciudad Victoria.

Note—Translation of the original Spanish version of the article to English by M. Mendoza.

What: In recent months, U.S. residents have been charged with weapons trafficking and attempted sale of .50 caliber Barret and Barret 82A1 rifles. These sniper rifles were purchased in the United States with the intent to resell to Mexican cartels. Three additional .50 caliber sniper rifles were seized in the city of Nuevo Laredo from CDN (Cártel del Noreste, or Northeastern Cartel), a splinter group of Los Zetas.

When: All three of the above featured seizures occurred between January and July of 2017. There have also been multiple incidents of cartel sniper rifle use over the last ten years. From June 2007 through June 2011, at least ten Mexican soldiers were killed by reported cartel snipers. In May 2011, one or more .50 caliber rifles were used in an anti-helicopter role in Apatzingan, Michoacán (Bunker & Westerberg, 2013).

Where: The above weapon seizures occurred in Phoenix; San Luis, Mexico; and Nuevo Laredo, Mexico. Documented sniper rifle use has occurred in the Mexican states of Baja California, Chihuahua, Michoacán, Nayarit, Nuevo Leon, Tamaulipas, and Sonora. Seizures have also been reported in Durango, Sinaloa, and Veracruz.

Why: These sniper rifles are high-powered weapons used for anti-personnel targeting, disabling vehicles, and anti-material missions. They also have light to moderate armor-defeating capability. Well-trained snipers can assassinate a high value individual using “one shot, one kill” and then escape undetected. This poses a concern to politicians, military, policing officials, and plaza bosses who represent high value targets in cartel conflict environments (Bunker, 2014).

The sniper rifle has become a preferred weapon for cartels since a round can penetrate walls, steel, and the sides of unarmored and even moderately armored vehicles. Unfortunately, information on cartels’ sniper rifle use is often incomplete due to the covert nature of their employment and the competing interests surrounding the tracking and dissemination of related details.

As in the incidents highlighted above, U.S. residents often facilitate the purchase and delivery of sniper rifles to the Mexican cartels. Such acquisitions can be conducted through online purchases or legal gun sale transactions. Attempts to smuggle sniper rifles off of U.S. Army and Marine bases have also been reported. In addition, roughly 34 Barrett .50 caliber rifles were delivered to Mexican drug gangs as part of the ATF Fast and Furious Operation between 2006-2011(Bunker, 2014).

Seized sniper rifle optics have primarily been daylight telescopic sights, with a few electro-optical (battery powered) sights found. Press photos have not shown any evidence of night vision devices seized, but what appears to be a laser targeting device mounted on a large caliber rifle is among seized artifacts in the Mexican Narco Museum.

Cartel use of snipers is more frequent than suspected. Cartel snipers have been recruited from Mexico’s Special Forces, the Army, law enforcement deserters, the Kaibiles (Guatemalan Special Forces), and other mercenaries—including former U.S. military personnel (who may have gang ties). Since Special Forces personnel have defected to the various enforcement arms of Mexican cartels, it can be assumed that these criminal groups have paramilitary capabilities and utilize tactics that are both terrorist- and insurgent-like (Bunker, 2014). Still, only a fraction could be considered competent snipers. Most cartel snipers are unsophisticated operators of rifles with optics (Bunker & Westerberg, 2013; Bunker, 2014).

The Mexican Army (SEDENA) was expected to begin fielding sniper detection systems and deploying dedicated Special Forces or Army counter-sniper units armed with .50 caliber Barrett rifles in May 2012. These units would augment pre-existing SEDENA and Mexican Naval (SEMAR) snipers accompanying infantry units deployed to regional hot spots, such as Michoacán and Tamaulipas as required (Bunker, 2014). There have not been any publicly posted updates on the status of Mexico’s investment in such sniper detection systems.

Two types of rifles…have been seized from the drug gangs and cartels in Mexico: Quasi- and Dedicated-Sniper Rifles.

Quasi-Sniper Rifles [or] “Improvised Sniper Rifles” are created by employing optics with magnification on AR-15 and other styles of semi-automatic rifles and assault rifles. These are unsophisticated attempts to replicate the capabilities of “Designated Marksman Rifles” or “Special Purpose Rifles”. They can be used for delivering intermediate range precision fires.

Dedicated Sniper Rifles… are designed for tactical employment at long ranges. Hunting rifles are likely counted in this category, as gun data is often collected and disseminated with a lack of precision, for a variety of reasons. Bolt action variants generally deliver greater precision, but are limited to specialized use when facing opponents with standard semi-automatic or select-fire rifles. Dedicated-Sniper Rifles … can be further divided into standard rifle caliber and large caliber variants. Standard caliber variants [for] “Quasi-Sniper Rifle” are often 5.56 x 45mm, while “Dedicated Sniper Rifles” are often 7.62 x 51mm or similar calibers. Large caliber variants…are .50 caliber and 12.7mm rifles, as well as 20mm and like calibers. 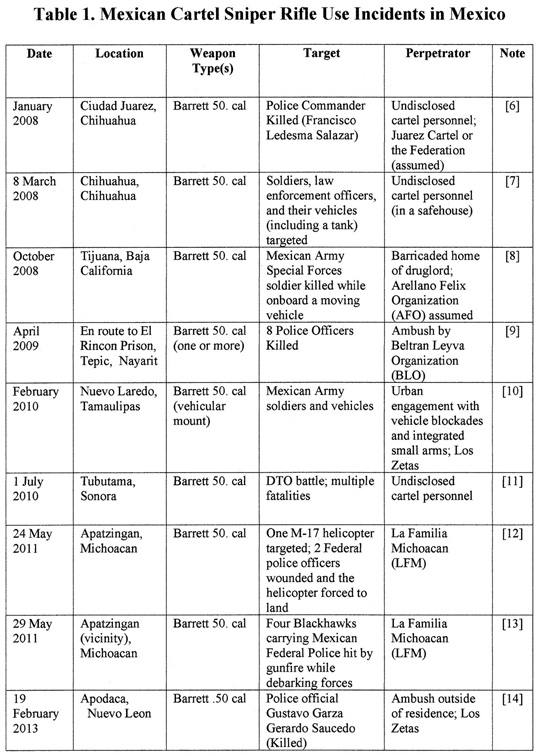