Mexican Cartel Tactical Note #31: Use of Burreros to Scale and Lift Up Border Fencing

The following are still shots from a You Tube video where a masked man literally lifts up a section of border fencing to allow burreros through to the United States. 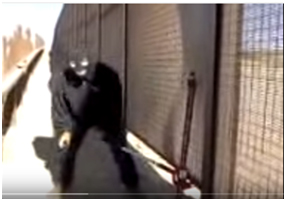 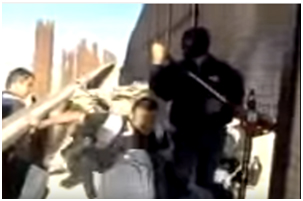 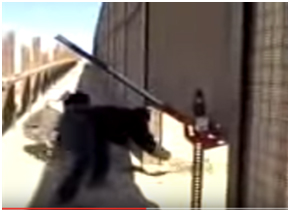 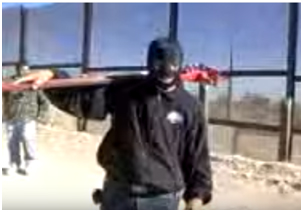 Caption: After the burreros pass through, the drug smuggler uses a branch to wipe away any tracks and then kicks the device loose to return the fence to its original position.

The following are still shots from the You Tube video featuring a group of 10 young burreros filming themselves as they trekked through the desert. 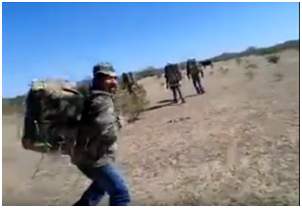 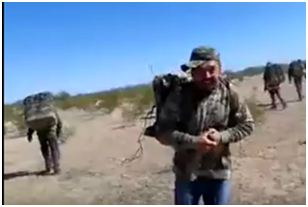 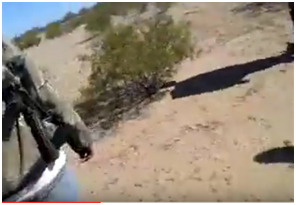 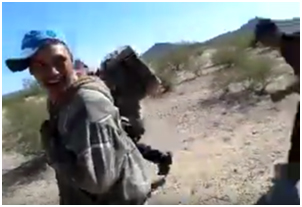 Caption: Burrero joking with the filmer. When he turns, his rifle comes into view of the camera. 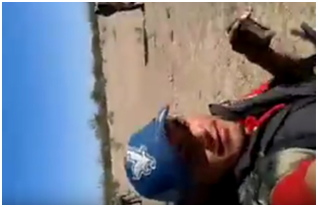 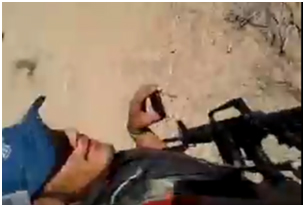 Caption: The young filmer could not resist turning the camera on himself. He has his cell phone playing “Soy Burrero” in one hand and his rifle in his other hand. 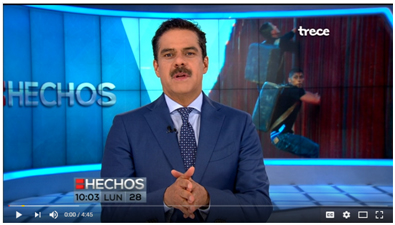 Caption: The above link connects to the actual Azteca Noticias news segment. 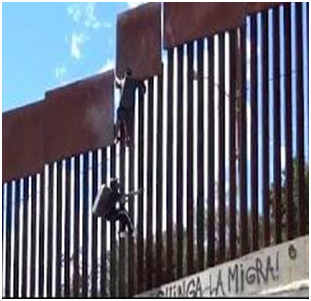 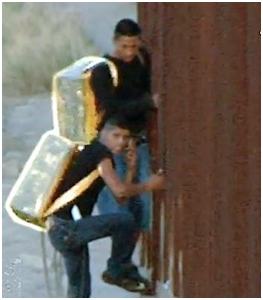 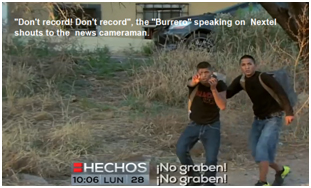 … The event began with an Azteca Noticias reporter, filming a news segment in Nogales near the border fence, when the news story was interrupted by a situation that became the news story.

Two young “buerreros”, literally drop into camera range, while conducting their “work” of transporting a backpack of drugs over the border wall.

There are Border Patrol agents at the scene but they fail to notice the two drug transporters climb over the fence. The buerreros seem unnerved on the U.S. side as they leisurely walk across the street, with their huge square makeshift backpacks.

The drug transport would have been a fait accompli, had not the young Mexicans spotted the reporter and the cameraman recording their actions. Regardless that the BP did not spot the two, they were told, or decided on their own, to return to Mexico.

Who: Many cartels utilize “burreros”, or human mules, to transport drug loads, but the above video locations are consistent with the Sinaloa Cartel, Gulf Cartel, and Los Zetas drug territories.

What: Young burreros, harnessed with drug loads, are scaling over and crawling under border fencing to transport drugs into the United States. Popularized in narco music videos such as Soy Burrero by Pedro Garcia y su Arsenal (Evolution Music Group) in a 2013 You Tube video that intertwines artistic and actual trafficking imagery.

When: The cartels’ use of burreros has become an increasing security concern in the last five years due to the extent of video footage posted online documenting these border breaches and the fact that in some instances they are being escorted by heavily armed security elements.

Where: Burrero movement has been documented along the border between Mexico’s Sonoran Desert, California, and Arizona. They most commonly cross the border through desert lands, but the above news segment documented them scaling border fencing in a busy residential area.

Why: Using swift climbing burreros to scale the border wall and smugglers to “lift up” border fencing so burreros can crawl under the border allows cartels to continue their lucrative drug operations even as the United States and Mexico look to tighten security through a border wall.

Analysis: Burreros have become an effective alternative to driving loads through border crossing checkpoints. In addition to using ramps and temporary bridges to lift loads over the border (see Tactical Note #29), drug smugglers use pure manpower and adrenaline to circumvent the border. Burreros are primarily professionals transporting frequent loads for the Mexican cartels. They tend to be able-bodied young men capable of carrying heavy loads—typically but not exclusively marijuana—and enduring strenuous treks through extreme terrains. Throughout the journey, burreros are directed by halcones (cartel scouts) positioned within the desert hills. The halcones often use sophisticated technology such as night vision, binoculars, and other military grade equipment. Many halcones are former military or military trained in survival skills to be able to endure long, difficult stints in severe desert conditions. Of concern is the documented arsenal carried during incursions onto United States soil. The “Burreros en Sonora” You Tube video documents burreros being escorted by two armed leads carrying AR-15 type rifles, with at least one of those rifles utilizing a high capacity magazine. For scouting and tactical mobility requirements, neither security element member is carrying a drug load.

Border breaches are most often documented by the smugglers themselves. The You Tube video featuring the masked drug trafficker using a car jack-like device to lift border fencing is a brazen example of self-promotion. It demonstrates how easy it is to “lift up” border fencing roughly 3 feet high to allow five burreros with large drug loads harnessed to their backs to crawl under. The entire act occurs in about five minutes.

Cartels enlist young burreros to serve as swift climbers to scale border fencing and deliver drug loads into the United States. As was the case documented in the Azteca Noticas news segment, even when Border Patrol agents are nearby, burreros are able to scale the fence so quickly they are often undetected. The video shows the two young men using a Nextel radio/cell to remain in constant communication, most likely with halcones. When they spotted the reporter and film crew, they scaled the nine-meter-tall (almost 30 feet) wall to return to Mexico in less than 15 seconds, per the Borderland Beat posting.