Note—Up until recently, weapons that provide for armor and bunker defeat capability at the levels that the RPG-29 is capable of, have not been seen in the hands of the Mexican cartels.  The fact that they have successfully obtained them—and the origin and mechanism by which they were obtained should be of extreme concern to everyone.

Who: The Mexican cartels; the specific cartel which had the RPG-29VR round in its posession is not identified.

What: The RPG-29VR is an advanced Russian anti-armor round capable of defeating all types of modern main-battle tanks including the American M1A1/2 Abrams. See Photo 1 where it is being held by Ioan Grillo.

When: The date the RPG-29VR was placed in the museum’s collection is unknown.

Where: The Mexican Army museum where the RPG-29VR round resides is found in Mexico City and is not open to the public.  It is meant to provide training for the Mexican Army concerning narco culture (narco cultura).

Why: The Mexican cartels have been increasingly obtaining military grade weaponry in their conflicts with each other and with Mexican federal police and military and naval units.

Note: The RPG-29 launcher and PG-29VR round combination is in service in a number of countries. There are indications that Mexico may also be fielding the weapon on a limited basis.  This weaponry has been used by Hezbollah forces against Israeli armor in Lebanon in 2006. The reader will also note that the round in the frame extracted from the video has a blue band midway along its length.  This marking is common and should not be confused with content color-code markings on standard munitions.  Light blue color-codes are often used by the U.S. and several other countries to identify inert or drill rounds, however, the RFAS is not among them.  They have historically used orange (and occasionally silver with markings) over the majority of the WH or WH and rocket body.  They also use all yellow on “inert” mock-ups (such as MANPADS) and a particular shade of gray on certain training launchers.  As can be seen, the round found in the Hezbollah cache, [Photo 2] also has this distinctive blue stripe. 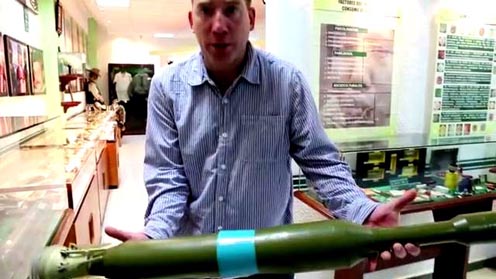 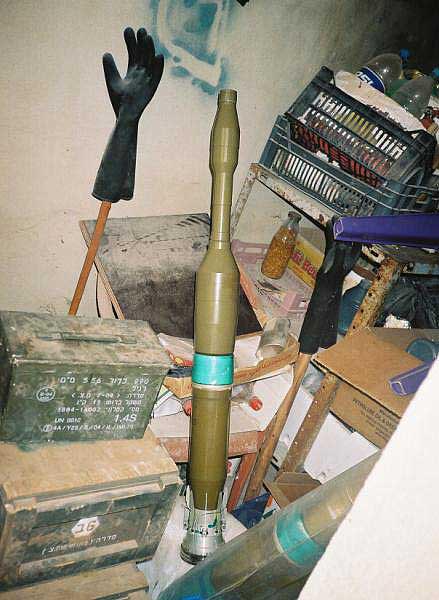 Photo 3. RPG-29 Launcher and Round

The unusual looking rocket munition picked up for viewing by the narrator during the video documentary of the Mexican Army’s private narco-war museum, the “Museo de Enervantes,” is a PG-29VR Tandem-Warhead Round that is designed to be fired from the RPG-29 “Vampir”(Vampire) Portable Anti-tank Rocket Launcher [Photo 3].  This round is produced almost exclusively by GNNP Bazalt in Russia, and previously, in the CIS (Common Wealth of Independent States).  Contradictory reports exist as to the possible production of this round via SEDENA in Mexico, however, there are questions concerning this.  Distribution via RFAS state factories, including export sales, is rather limited in comparison to the standard HE (High Explosive) based PG (RPG based rocket) rounds normally encountered.

Of great interest, regarding this particular PG-29VR round, is a further inquiry that was made by the reporter and author of the video, Ioan Grillo, to one of the Mexican officials at the Museo de Enervantes.  Mr. Grillo inquired as to exactly where this round was encountered.  The Mexican official indicated to Mr. Grillo that the rocket he was describing was not real, but simply a mock-up that they (the Mexican officials) had produced.  According to the official, they wanted to show an example of the type of military weaponary that the cartels were acquiring.

There are several problems with this story.  First, they have picked an unusually difficult (and extraordinarly time consuming) munition to copy and get it right, as this one appears to be.  A detailed, scaled analysis of the photo frames extracted from the video that contain the round indicate that it is correctly proportioned on every angle, faithful to the original.  Most importantly, the rocket venturi including the fins and fin pinions, fin position, and number are fabricated identically to the genuine article including the subdued light gold anodize coat that is consistent with the type used at RFAS state factories.  Last, but not least, is the question as to why,  if they went to so much trouble to fabricate this “mock-up” for all to see, it was on the floor under a table with what is presumed to be the overflow ordinance.

The RPG-29 weapon is an anti-armor shoulder-fired launcher that is 2-meters in length but folds for transport into two halves, taking up only 1-meter in physical space.  The launcher is normally equipped with an optical sight that will allow the engagement of ground targets up to a maximum range of 500-meters, however, it is also available with laser-based sights and a fire-control unit that will allow ground targets to be successfully engaged at 800-meters.  The launcher is equipped with a mono-pod to increase firing stability with the additional weight of the alternate sighting/fire-control system, but is still retains shoulder-fire capability.

The PG-29V round was specifically designed to defeat frontal MBT (Main Battle Tank) armor that is equipped with ERA (Explosive Reactive Armor).  The forward warhead carries a shaped-charge designed to detonate the ERA layer.  The fuzing system provides a fraction of a second delay for the 105.2mm main warhead to detonate at the correct stand-off distance from the armor for full penetration.  It is important to note (in the context of the region where one of these rounds has been encountered) that the primary manufacturer of this system (RFAS) has emphasized for a number of years that the PG-29V round is capable of defeating all current armored vehicles at any target angle.  It is specifically designed to successfully engage the MBT.

The reader will note that the PG-29V in the video is similar in appearance to the PG-7VR tandem warhead round designed for the RPG-7.  There are some similarities in performance in terms of on-target effect; however, there is a substantial difference in effective range, which for the PG-7VR is limited to approximately 200-meters.  As previously mentioned, the PG-29VR can achieve results at 500-meters using the standard optics.  Under most conditions, it is also likely to possess greater accuracy at distant engagements.

When deployed against armor, the PG-29VR will defeat 750mm (29.5-inches) at a normal angle of incidence, however, it will also defeat 1.5-meters of reinforced concrete or 3.7-meters of earth and logs.

The fact that the cartels were in possession of one or more RPG-29s should give everyone pause and concern regarding the level of battlefield armor and bunker defeat weaponry that they are successfully obtaining and exactly where they are being obtained from.

Special thanks to Ioan Grillo and Adam Geibel for additional research support on this tactical note.

Anikh Wadhawan is in the political science program at the University of California Riverside with an emphasis in law and society. He is co-founder and Director of Finance of The Political Science Society and also a District Manager at Subway Inc. in San Diego, CA. He is presently researching Mexican cartel stockpiles and use of anti-tank weaponry such as rocket propelled grenades (RPGs) and light anti-tank weapons (LAWs).

David A. Kuhn provides specialized law enforcement and first responder training throughout the United States, focusing on terrorism incident response, threat mitigation, and interdiction.  He is is a recognized authority in the area of military standoff weapons and deployment, MANPADS (Man-Portable Air Defense Systems), and forensic analysis of incident areas where such weapons or explosives have been deployed.  Additionally, Mr. Kuhn has developed a number of comprehensive, advanced training courses designed to provide law enforcement agencies and Special Response Teams with the knowledge needed to address these emerging threats.

In the areas of seaport and harbor security, Mr. Kuhn focuses on harbor penetration, IED’s / WMD threat, interdicting waterborne attack, weapons and munitions smuggling / detection and countermeasures.  He has over 3200 hours in the planning and execution of complex and hazardous underwater operations.  He has been an advisor to law enforcement agencies including the U.S. Coast Guard, U.S Customs, and law enforcement marine patrols on harbor security, penetration countermeasures, and contraband interdiction.  Additionally, Mr. Kuhn is a consultant to the U.S. Merchant Marine Academy on maritime security and Security Standards Development.