The Meaning of Memorial Day

The Meaning of Memorial Day 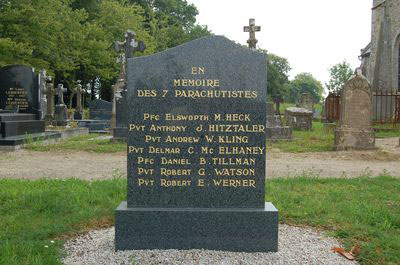 This year marks the 74th anniversary of the Normandy Invasion. As time proceeds, the memories diminish and the significance ebbs into oblivion. There are occasional bursts of “remembrance” that capture a moment in time and permit some symbolic gesture for an historical event largely lost in time. This year, Presidents, Prime Ministers and the panoply of civilization will assemble on the week of the 6th of June to commemorate acts of long ago and to pledge fealty to that spirit and sacrifice.

The invasion beaches will be serenaded by bands, banners and pomp and circumstance. Speeches will be made by the momentarily famous elected and appointed leadership of many nations recounting the events and meanings that took place there 74 years ago. Quickly, the crowds will disappear, the tides will continue, and the events be forgotten. But the real meaning of Normandy, 6 June 1944, and our Memorial Day, lives on in the obscure rural towns and villages of the Normandy Peninsula and more honestly reflects the true meaning of the event.

For these people, 6 June 1944, is current events and a moment and spirit to be honored in perpetuity. This is the French honor to what is truly Memorial Day. Their selfless and profound reverence is the exact point of what our Memorial Day means. It is repeated in virtually all villages of Normandy in honor of those of our Nation that died on their behalf. Such a place is Hemevez.

Hemevez is a very small obscure farm town near the more populace city of Picauville. One would have to have an acute desire to visit and a great sense of navigation or be hopelessly lost in order to encounter its environs. Yet, on the slight high ground of the village center, resides what the inhabitants believe Normandy and the invasion of 6 June was all about. The hill is dominated by a small church and copse of trees.

The church is encompassed by a graveyard of several hundred years and several monuments to the various wars that the men of Hemevez have served and sacrificed. The monuments are close by an open farm field and gathered together-much like gravestones of the past. On one edge, in an open sunny place, is a unique stone. It is polished black granite with gold letters. Unlike the others, it is not an obelisk but rectangular. There are words and names incised on it and lettered in gold. Also unlike the others, it has a small gravel walkway leading from the church directly to its front. It truly stands alone among the others and is treated as such.

Across the top are the simple words in French, In Remembrance Of The Fallen Soldiers 6 June 1944.

Under are seven names. All executed members of the 507th PIR, 82d Airborne Division, 6 June 1944. On that night, 14 soldiers of Headquarters, 1st Battalion, 507th Parachute Infantry Regiment, at around 0240, were mis-dropped over the small village of Hemavez. Seven were captured and executed by the local German unit and seven evaded capture and eventually returned to US lines. One soldier observed the execution from a hidden shell crater. On the back of the monument is the statement in French,

The seven captured were lined up and shot in a field close to the church. The villagers buried those seven within the grounds and later, as the Allies cleared the area, repatriated those bodies. However, the villagers did not forget them or what they signified and built this monument in their memory. Each year, at the anniversary period, the entire village gathers in the churchyard and remembers those teenagers of long ago and what they meant for their grandparents, for them and their succeeding generations.

This is not a contrived event as the town is as obscure as a distant rural small village can be. No personages of import, French or American, present themselves except on the rarest of occasions and then, often by chance. It is not important to the village. They know why they have assembled and it is important to them.

The sun peaks over the roof of the church. Next to the monument, the mayor stands. A farmer amongst them, he is wearing his best and only suit and tie with a stained shirt and shoes still muddy with the residue of his livelihood. The prefect of the church has a small antiquated CD player.

Next to them, in line, are the local historical representatives of the FFI, Army units and Foreign Legion with their flags, dressed simply as the mayor. If there are attendees other than the village, the mayor brings them forward in a place of honor.

He begins by playing the US National Anthem on the CD, somewhat broken and stuttering in reproduction. Following protocol, he then plays the Marseilles. Every citizen, as is the French custom, including the flag bearers, sings somewhat lustily and with emphasis. At the conclusion, several of the donkeys in the adjacent field begin to bray, lending a concluding chorus to the affair.

The mayor signals for the CD to be stopped and ignoring the braying, quietly recounts the events of that night so long ago. It is a simple statement of facts. The villagers stand mute and without gesture, thinking about those words. The mayor then pauses and begins again.

He quietly but with clear enunciation reads each name graven in gold;

At the end of each name, the villagers in unison and a firm voice state; “Mort Por La France.”

After the seventh name is read, the mayor turns to the village priest who issues a short prayer. The villagers cross themselves, quietly turn around and depart. Some linger and drop a flower or bouquet by the monument. The cattle peer through the wire at the event, the donkeys feed in the tall grass and the sun settles behind the church.