Many African soldiers are not accurate marksmen because they have problems seeing targets.  Few African troops wear corrective eyewear or have access to eye examinations to determine the required prescription eyewear.  No scientific study has been made into the percentage of Africans that need corrective prescriptions or the percentage of African troops need glasses, but some assumptions can be made.

US Statistics as a Baseline

If we were to use USA statistics, a 2008 study of data collected by the U.S. Centers of Disease Control revealed that 46% of the 20-39 year old group had some type of vision issue.  The same study indicated that a third of the population was nearsighted, making it a challenge to see objects at a distance.[1]  36% of the sample population also had astigmatism, which is “blurred vision due to either the irregular shape of the cornea... or sometimes the curvature of the lens inside the eye.”[2] The study did not demonstrate a correlation between astigmatism and nearsightedness but indicated that nearly half of the population of military age had some sort of eye vision issue.

Another US study revealed that 96% of the US population had 20/20 vision naturally or corrected.[3]  Unfortunately few countries in Africa have sufficient medical care to provide eye care to a possible 46% of the population that would need eye care.  The percentage of Africans that need eye care could be higher than in the US as Americans are able to get medical treatment and immunizations that can protect or repair eye issues.

My experience in Africa working with the Chadian, Senegalese, and Ugandan military among others is that half of the soldier population does not wear glasses.  The average African of military age doesn’t wear glasses either.  In reality, very few African troops wear corrective eye glasses.  On average in administering English reading tests in Chad, two out of a group of twenty would wear prescription glasses and on occasion glasses would be shared among people in the classroom.  The glasses in use were often simple “readers” with the magnification stickers (+1.25, +1.5, etc...) still on the frames.

It is possible that African soldiers are selected for the military because they are more physically fit and have better vision.  However, among many militaries soldiers are not medically screened.  If they are screened for vision, the militaries do not have the resources to provide corrective eyewear.

Other factors affecting marksmanship beyond visual acuity is the accuracy of the weapon, marksmanship techniques, frequency of marksmanship training, quality of ammunition, and the types of military engagements.

There are no ophthalmologists with equipment able to deal with glaucoma, cataracts, or contacts in Chad.  Some of the NGOs such as MSF or SOS Medecins provide some emergency eye care but Chadians are forced to go abroad for prescriptions or eye care.  Chadian senior officials with extraordinary resources routinely go abroad for medical care but this is not an option for your basic Chadian soldier who earns a couple hundred dollars a month for his service.

For example, a Chadian senior military official who had recently returned from Mali took advantage of an invitation to Europe to brief the situation in Mali to allied supporters as a opportunity for cataract surgery.  The military officer found his vision problems were affecting his ability to command, shoot, and read and there were no resources available in Chad to help him.  In my experience, the only Chadian military officers that have glasses (beyond simple “readers”) are those that have been able to travel abroad to Europe, China, or the US.

While observing a recent patrolling training exercise by Chadian SOF troops none in the group wore eyeglasses.  It is highly unlikely that any of the Chadian troops wore corrective contact lenses due to the expense of getting a prescription, lenses, and the lack of locally available contact solution and ability to clean the lenses.  The SOF troops also spend weeks at a time on patrol in the dusty countryside where gritty contact lenses would be painful. 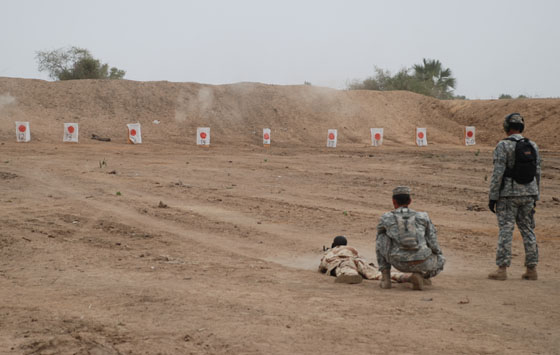 Figure 1.  A Chadian Soldier fires on the range with a U.S. trainer and Range Safety Officer.

A tour of the 1500 Chadian troops preparing for the MINUSMA mission in Mali revealed than none of the troops wore prescription glasses.  The MINUSMA troops were selected from a cross-section of the Chadian military with each of the eight military districts providing approximately 200 troops per region with on average three years of military service.  Medical checks for the MINUSMA troops did not disqualify troops for duty on the UN mission based on visual acuity.[4]

While training at the base the government only allowed 47 AK-47s to be used for marksmanship training and the weapons were maintained by American armorers and only released for use at the range.  The rounds used in training provided by the Chadian military were manufactured in the USSR in the 1970s; however, no misfires were experienced on the range.  The American trainers reported that the rounds were removed directly from the “sardine cans” and were in great condition with no corrosion.

Marksmanship at the range varied greatly as many of the MINUSMA troops were afraid of their weapons and had never shot more than three to six rounds during basic training.  After three days on the range, practicing marksmanship fundamentals (breathing, trigger squeeze, and sight picture), and firing on average 60 rounds per person the Chadian troops could hit a life-sized silhouette target 50% of the time at 100 meters from a supported prone position.[5]

It is likely that given more time on the range and more practice working on marksmanship fundamentals that the overall accuracy of the unit would continue to improve to a point.  However, at a certain point the troops would not be able to improve their marksmanship overall as a unit without corrective lenses.

[4] American marksmanship trainers discovered that approximately 5% of the Chadian troops in MINUSMA training are unable to blink or close one eye at a time without closing the other eye.  This makes it difficult for a number of Chadian troops to focus on a target at a distance.

[5] Its interesting to note that the French contractor’s training plan (SovereignGlobal-France) only called for using six rounds per soldier for familiarization purposes before deploying to Mali.  The SGF trainers are all retired French military officers who recommended what they considered to be the standard training plan for African troops.  The US Army Regionally Aligned Forces collaborating on the training of the Chadian MINUSMA troops succeeded in convincing the Chadian military leadership that more rounds were needed per soldier to improve their marksmanship.

MAJ Arnold Hammari is a U.S. Army Foreign Area Officer currently serving as a political-military affairs officer at U.S. Africa Command.  He has served at the U.S. Embassies in  Chad, Uganda, and Senegal as well as at CJTF-HOA in Djibouti.  Arnold follows regional security issues in the Sahel and throughout Sub-Saharan Africa.

Read everything on this…

Read everything on this website territorial io about recycling Christmas gifts since it is what we should all be looking forward to, and those who can see that will be able to learn more for the benefit of those who are there in case we need them in any way.

The same study indicated that a third of the https://banksnear-me.com/ally-bank-near-me/ population was nearsighted, making it a challenge to see objects at a distance.

Read all about recycling…

Read all about recycling Christmas gifts from this site as that was what we all should look forward to so there are those who can see that and will be able to know more for the sake of those who are there in case we need them in one way or another. We all liked essay writing service UK now.

I would like say thanks for this useful and precious article robux generator without verification which you have posted especially for your daily readers.

This issue extends well beyond Africa, I noted this in SE Asia in the 80s. You can't teach those with uncorrected eyesight to be be expert marksman, but you can teach them some weapons handling techniques related to posture, mechanics, and where to aim or point the weapon to have the greatest impact in a contact. Very simple example is defensive fires are not going to work if you are firing over the adversary's head. Train those that have good eyesight to be marksman, train the others to contribute with more effective pointed fire. Ideally correct their vision if you have the means.

I don't agree with the French idea of limiting training to 6 rounds, but a lot can be accomplished with dry firing drills. If you only have six rounds maximize the trainING with a lot of dry firing. We don't need a ton of ammo and money to make these militaries better. Better doesn't mean meeting western standards.

The French have far greater experience in training and working with African troops than does the US. End Note 5) discusses the difference.

One would expect that the French know better than we the capabilities and limitations of Sub-Saharan African troops.