Lost In Translation: How Language Affects Perception During Armed Conflict

Lost In Translation: How Language Affects Perception During Armed Conflict

Headlines announcing green on blue attacks provoke much less of an emotional response than a headline stating - “a friendly Afghan soldier killed a US Soldier”.  The language of armed conflict is rife with ambiguity.  Priding itself on direct communication, the profession of arms often muddles the point.  Professional military language is rife with the use of euphemisms, metaphors, and clichés.  The aforementioned examples may seem insignificant, but when one understands that language has the ability to influence perception, the implications are substantial.  Language is the way in which we experience the world.  Military professionals need to be cognizant of language on both a macro level (translation issues) and a micro level (within one’s native language) because it affects perception in international conflict.

The Macro idea language influences perception is linguistic relativism.  First posited by Benjamin Lee Whorf and Edward Sapir in 1929, linguistic relativism states one’s language helps create their reality.[1]  Perhaps the most dramatic example of Whorf and Sapir’s research deals with Hopi time.  Whorf discovered that the Hopi language expressed time differently than modern Indo-European languages.  Specifically, Hopi language has "[…] no words, grammatical forms, construction or expressions that refer directly to what we call time”.[2]  Notwithstanding the implications to physics, this hypothesis qualified the notion certain ideas are not universal and are not comprehensible in every language.

Up until recently, there was no quantitative support for linguistic relativism, or the idea language affects a speaker’s worldview and thought processes.  Since the 1920s, computing power has increased exponentially.  With the increased proliferation of machine learning algorithms, it has become possible to utilize multinomial analysis to compare semantic structure and meaning in parallel texts.[3]  The studies have shown languages with the largest disparity in presumed similarities to English are: Chinese, Arabic, and Russian.[4]  One needs to look no further than the recent headlines to presume the current geopolitical situation is more than a matter of, “lost in the translation”.  This means when dealing with cultures such as those in the Middle East, one not only has to be cognizant of the obvious cultural differences, but also the different thought patterns the language fosters.

Another macro concern with language deals with color.  What is the color of orange juice?  If you are like most people, your immediate response is orange juice is colored orange.  A quick stroll down a grocery store aisle will prove it is, in fact, yellow.  This example shows how much influence language has on our perception.  Different languages perceive colors differently.  Compared to the orange juice experiment, Gilbert et al. conducted a much more robust experiment in 2006 which focused on the portion of the brain that processes language.[5]  Illustrated in the diagram below, visual stimuli from the right hemisphere is processed in the left portion of the brain and vice versa. It just so happens the portion of the brain responsible for language (Broca’s area) resides in the left portion of the brain, which is fed data from the right visual field.[6]  Gilbert et al.’s experiment attempted to use this asymmetry of perception and one’s reaction time to prove language influences perception.  Subjects participated in an “odd man out” task where they viewed a circle of colored blocks.  Which side the odd color block was on directly correlated to reaction time.  When the odd shaped color was in the left visual field, the amount of time it took to recognize the contrast was dramatically longer than when it was on the right.  This proved respondents needed to think in their respective language to define a color. 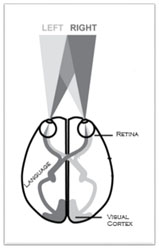 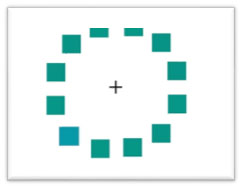 A macro, military implication of this phenomenon deals with camouflage.  Not understanding an adversary’s linguistic idiosyncrasies could result in one’s camouflage sticking out like the proverbial “sore thumb”.  For example, Russians do not have a single word for the color blue, instead they use goluboy for light blue, and siniy for dark blue.[8]  Numerous tests have shown Russians are much faster at identifying gradations in the color blue than English speakers.[9]  An unfortunate outcome of this phenomenon could entail using both shades of blue on an aircraft, thus displaying an inadvertent, obvious contrast of colors to specific people.

Macro linguistic differences can also indirectly foster insurgencies.  Too often, conflicts result in the losing minority ethnic group’s negative assimilation into the winning majority ethnic group.  Different ethnic groups have different languages.  When minority children attend schools which cater to the winning ethnic majority, they face great difficulty because they are not learning in their native language.  Because of this issue, the next generation of the losing ethnic group face insurmountable academic challenges.  This results in these children not learning basic literacy, and because of this frustration, they leave school early and have trouble finding jobs.  This phenomenon leads to feelings of anger and alienation, which insurgent groups play on to recruit new members.

Quite possibly the most significant anecdote of macro linguistic differences deals with the word peace.  The English word peace’s etymology comes from Ancient Roman foreign policy.  The Romans used the word peace for describing the process of bringing non-romans into the Roman Empire through conquest.[10]  Through the centuries, the English language word peace has become synonymous with a mutually exclusive relationship with war.  Contemporary Western thought holds dear the notion peace and war cannot exist at the same time.  This notion is in stark contrast to the modern Arabic word for peace, salam.  Instead of the absence of war salam means harmony or inner peace, both of which can still exist during a state of war.[11]

The only department of defense organization that was qualified to understand the intricacies of language and thought disbanded in 2014.[12] Known as human terrain teams, these organizations employed experts in social sciences to help commanders better understand the operational environment. Not all members of human terrain teams would be equally qualified for identifying perceptual minutiae.  The subfield of anthropology known as linguistic anthropology, would be best suited to explore the connections between different languages and perception.

One of the reasons for the disbanding of the human terrain teams were their exorbitant cost.  Over their eight years of existence, these teams cost $725 million.[13]  A much more cost-effective solution would entail structure that already exists.  The current proponent of military linguists is the Defense Language Institute (DLI).  DLI graduates serve admirably in every branch of service.  Military linguists interpret language and cultural nuance with ease. In addition to their already effective language training curriculum, specific training in linguistic anthropology could help remedy this capability gap.

Nobel Prize winning psychologist Daniel Kahneman believes humans use one of two mutually exclusive decision-making systems when confronted with a problem.  He refers to these systems as system 1, which is impulsive and intuitive; and system 2, which is capable of reasoning and statistical analysis.[14]  Mr. Kahneman also believes that system 1 is responsible for language processing.[15]  This means that language forms the basis of any decision made without concise deliberation.  In the English language, metaphors function by telling us about something by telling us what that something is not.  In political and strategic documents metaphors are encouraged and widely used.  Too often though, these same metaphors make their way into tactical documents where they do not belong.  For example, winning “hearts and minds” may fit well into a policy speech, but has no place in a platoon operations order.  The tactical level of war relies heavily on system 1 thinking, and where it cannot, it relies instead on battle drills and standard operating procedures.  Soldiers need to be free of ambiguous ideas and language.  An example of this problem occurred during Operation Iraqi Freedom when a brigade commander’s ambiguous guidance lead to the murders of non-combatants.  The brigade commander later attempted to clarify his guidance when he stated, “[…] While I never specifically stated that every military-age male should be killed on Objective Murray, the unit’s understanding fell within my intent. This didn’t mean that soldiers should wantonly kill every man on the objective. It meant that individuals on the objective were combatants by status unless they made a clear and objective action to become a non-combatant (e.g., stood still with their hands raised).”[16]  The above language does not lend itself well to system 1 thinking.

Because western military forces have had such difficulties defining insurgencies, they sometimes rely on metaphors.  From the British descriptions of the Colonist’s “skulking” way of war, to Nagle’s Eating Soup with a Knife, Western Armies describe insurgencies by describing what they are not.  Unfortunately, the use of metaphor is not limited to unconventional warfare.  Modern leaders use conventional war theorist Carl von Clausewitz’s “friction”, “center of gravity”, and “fog of war” rather fatuously.  Again, these terms are describing something by what it is not.  Instead of utilizing metaphors for explanation, leaders should better define their thought processes.  For example, when utilizing system 1, ideas like the “fog of war” and “friction” take on a whole different, superficial meaning than if processed through system 2.  Properly applied system 2 analysis would ultimately tease out the quantitative nuance of such terms.  Most military practitioners’ analysis stops at system 1, never arriving at the quantitative application stage.

Another micro-level concern with language deals with the military’s ubiquitous use of PowerPoint.  Staffs at all levels of command utilize PowerPoint to brief major operations and decisions.  In an attempt to make these briefs more comprehensible, some form of color coding is almost always present.  Most commonly the conditional formatting of red/yellow/green shows current/future statuses.  This type of universal color coding encourages shallow system 1 thinking.  No doubt, there is more than one data point factored into a summary of “red”.  Color coding takes the burden of understanding away from the party receiving the brief and often neglects the essential facts used in the formulation of the “red” rating.

A simple solution for the all-pervading color-coding problem would be to remove color coding entirely.  The removal of any color coding ensures decision makers are required to use system 2 thinking.  This technique would also promote more dialogue between decision makers and briefers, thus leaving little open to interpretation.

Finally, an understanding of micro-level concerns with language would be incomplete without an explanation of the Pygmalion Effect.  In the study of psychology, the Pygmalion Effect is when one’s expectations of a target person affect the target person's performance.[17]  In short, the Pygmalion Effect states people usually conform to expectations made of them.  The language used when expressing expectations to subordinates directly affects their performance.  The use of euphemisms, metaphors and clichés is not an efficient way of getting your point across in such documents as: commander’s vision, goals, and objectives.  Subordinates will attempt to realize these directives both consciously and sub consciously.  If these directives are describing something by what it is not (such as the use of metaphor), the commander could be sub-consciously harming the performance of his or her unit.

In summary, this article highlights the need for military professionals to be aware of the use of language on both the macro and micro levels.  Language influences international conflict through multiple echelons.  The most important influence being the perception of war and peace.  The application of linguistic anthropology to today’s understanding of conflicts could offer an invaluable resource for conflict resolution.  More focused research in the military benefits of linguistic anthropology is required to truly reap the rewards.  The author hopes the next time the reader is discussing non-state actors in a theater of war he or she will pause and utilize their system 2 thinking.

Major Scott E. Bruck, U.S. Army Reserve, is currently the force development officer at the 4th Expeditionary Sustainment Command.  He holds a B.S. from the Pennsylvania College of Technology and an MBA from Drexel University.  During his career, Major Bruck has served with the 10th Mountain Division, 1st Infantry Division, 75th Training Division, and the United States Army Reserve Command.