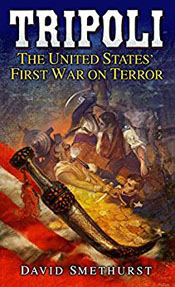 In 1800, the United States was threatened by the Barbary States of Morocco, Tripoli, Algiers, and Tunis. These states, located on the shore of North Africa, had for centuries demanded an annual tribute to allow Christian vessels to trade unmolested in the Mediterranean. Since the young nation was no longer covered by the annual tribute paid by Britain, the United States signed peace treaties with each of the states, and grudgingly agreed to pay annual tributes. Four consuls were also appointed to maintain the fragile peace. One of them was William Eaton, a 34-year-old soldier diplomat, who was appointed consul to Tunis.

In 1801, Tripoli declared war on the United States. Thomas Jefferson responded by sending the U.S. Navy and fledgling U.S. Marine Corp to fight the Barbary Pirates.  The war dragged on for four years until 1804, when Jefferson decided to break the stalemate with a bold stroke: He ordered General William Eaton to Egypt where he was instructed to raise an army and march across the desert to seize the pirate fortress of Derna.

On March 6, 1805, on a dusty field outside Alexandria, Egypt, Eaton surveyed the army he had assembled.  Before him stood his chief of staff, Colonel Eugene Lietensdorfer, and Hamet Bashaw, the rightful heir to the throne of Tripoli who had been deposed by his brother Yussif Karamanli, along with his staff. His headquarters guard accompanied them: Marine Lieutenant Presley O’Bannon, midshipman Pascal Peck, a marine sergeant, and six marines.

The army was also comprised of a company of Greeks whom Eaton had recruited in Alexandria. They were led by Captain Luco Ulovix and Lieutenant Constantine, who commanded 40 well-trained soldiers. There was also a company of cannoniers, commanded by Selim Comb, his janissary and translator, and lieutenants Connant and Rocco. They had one field gun, and comprised twenty-five men.

Then there was Hamet’s personal escort, about ninety men, followed by a troop of sixty Arab cavalry commanded by Sheik Mahomet and Sheik el Tahib. Finally, there were approximately 400 Arab foot soldiers. A transport group containing 190 camels as well as some horses and donkeys, along with their handlers, would carry provisions for the long march across 500 miles of the Western Desert to storm the pirate fortress of Derna, then go on to take Benghazi, and ultimately, Tripoli.

On April 27, 1805, Eaton and his ragtag army stormed and took Derna. After this defeat, Yussif Karamanli, the ruler of Tripoli, sued for peace and Eaton and his men were shipped home from Derna on June 12, 1805 aboard the U.S.S. Constellation.

Here are some interesting and little known facts about the First Barbary War.

Hymns and Scimitars: After the battle of Derna, the phrase “to the shores of Tripoli” was added to the Marine's battle hymn, and the Marine Corp’s officer’s sword, adopted in 1826, was modeled after the Mameluke scimitar given to Lieutenant O’Bannon in honor of his march on Derna.

A Few Good Men: In 1799, just before the outbreak of hostilities, the United States Marine Corp consisted of twenty-five officers and fifty-eight enlisted men. On Eaton’s march from Egypt to Derna, he was accompanies by eight of them: Lieutenant Presley O’Bannon, his sergeant, and six enlisted men.

After leaving Derna, Lieutenant O’Bannon continued to serve aboard the Argus and retired from the Marine Corps on March 5, 1807. O’Bannon and his wife emigrated to Kentucky in 1809 where his wife gave birth to a son, Eaton, who died at an early age. O’Bannon went on to serve in both houses of the Kentucky legislature. He died on September 12, 1850 at the age of 74 in Russellville. In Frankfort, Kentucky, there is a memorial to him with the following inscription: “As Captain of the United States Marines, he was the First to Plant the American Flag on Foreign Soil.”

Naval Heroes: Of the many naval officers who served in the war, four stand out.

Midshipmen Thomas Macdonough went on to become the hero of the battle of Plattsburgh, fought on Lake Champlain during the War of 1812. During the battle, Commodore Macdonough’s forces captured four British warships: One frigate, one brig, and two sloops of war, dealing a decisive blow to the British Navy.

Charles Morris went on to become a first lieutenant on the Constitution and during the War of 1812 played a heroic role in the action against H.M.S. Guerrière. He was promoted to captain after this action, and went on to command two of America’s finest frigates, the Adams and the Congress.

James Lawrence also rose to great fame during the War of 1812, in which as commander of the Hornet, he captured the H.M.S. Peacock, and was promoted to captain. On June 1, 1813, as commander of the 49-gun frigate Chesapeake he fought the H.M.S. Shannon. During the action he was mortally wounded but told his men to keep fighting: “Tell the men to fire faster and not to give up the ship; fight her till she sinks!” In honor of Captain Lawrence, a group of women stitched the words “Don't Give Up The Ship” into a flag and presented it to Oliver Hazard Perry, commander of the U.S.S. Lawrence, named in the late captain’s honor. The navy has since named many ships in his honor, and his words aboard the Chesapeake became the motto of the U.S. Navy.

At the end of the War of 1812, Stephen Decatur sailed to Algiers aboard the 44-gun frigate Guerrière and eyed the familiar harbor of Algiers. On July 3, he negotiated a peace treaty with Algiers, in which the strongest of the Barbary States renounced its right to an annual tribute. Decatur sailed on for Tunis and Tripoli, where the Bey and Bashaw, respectively, signed lasting peace treaties with the United States. The Barbary States’ reign of terror was over.

Decatur lived only six short years after the Algerians signed the peace treaty. On March 22, 1820, he was killed in a duel with Commodore James Barron in Bladensburg, Maryland. He was 41 years old.

Henry Wadsworth: During the war, Commodore Preble decided to send two fire ships into the harbor at Tripoli to destroy the pirate gunboats that lay there at anchor.  Among the men selected for this task was 20-year-old acting lieutenant Henry Wadsworth. Preble selected him as second in command of the Intrepid. On the night of September 4, 1804, the Intrepid, which was now a fire ship containing 100 barrels of gunpowder, sailed into the harbor but tragically blew up before she could reach her target. The entire crew, including Wadsworth, perished.  The poet Henry Wadsworth Longfellow was named after his uncle, Henry Wadsworth.

Who was Colonel Eugene Lietensdorfer?: He was Eaton’s chief of staff during the march on Derna whom Eaton had met in Cairo. But how he came to be in Cairo is an interesting story worth of a book. Lietensdorfer’s real name was Gervasso Prodasio Santuari and he was 33 years old. He was an Italian, hailing from a village near Trent in the Tyrol. His parents had wanted him to become a priest, but he quit school at the age of seventeen, got married, and then joined up with the Austrian army in its campaign against the Turks. He fought at Belgrade from 1789-90, and continued serving in the Austrian army during the siege of Mantua. But in 1797, the Austrian army collapsed, surrendering to Napoleon.

Santuari did not wish to remain with the losers, so he changed his name to Carlo Hossondo and joined the French army. However, he was suspected as a spy and was thrown into a French jail. He escaped by poisoning his guards and changed his name again to Jean Eugene Leitensdorfer. He again rejoined the French army and had been part of the force that invaded Egypt, but had switched sides later on and joined the British. Since then, however, he had wandered. After trying to live a quiet life as the proprietor of a coffee shop for British officers in Alexandria, he had married a Coptic maiden, his second wife. But when the British withdrew, he left as well, leaving behind his wife and making his way to Messina, where he tried the life his parents had set out for him by entering a Capuchin monastery as a novice friar.

That life, however, did not suite him, so he left, and made his way to Constantinople where he became a dervish and a Muslim. He went by the name Murat Aga, wandering through the Middle East, eventually making his way to Mecca and Jedda. Finally, he took up as an interpreter to Lord Gordon, a Scottish gentleman, and accompanied him on a tour of Abyssinia and returned to Egypt where he had met Eaton.

After the evacuation from Derna, Leitensdorfer continued his wanderings until 1809, when he arrived in Salem, Massachusetts, and looked up Eaton. Leitensdorfer made his way to Washington, D.C. with Eaton’s letters of recommendation and got a job with Jefferson’s chief architect, Benjamin Henry Latrobe, as surveyor of public buildings. In 1833, for his part in the march to Derna, he received 320 acres in Missouri, where he lived until his death in 1845.

Meriwether Lewis: Meriwether Lewis was Thomas Jefferson’s private secretary and the only other occupant of the White House. Before becoming his private secretary, Lewis had been a captain in the Army of the West.  His grandfather and Jefferson’s father had a shared past:  They had created maps of Virginia.   Shortly after the Louisiana Purchase in 1803, Jefferson chose him along with his friend, William Clark, to lead an expedition to explore and map the western United States.  The rest is history.

David Smethurst was born in Philadelphia, Pennsylvania and is a dual citizen of the United States and the United Kingdom. He earned a master's in journalism from Northwestern University, and a Ph.D. in geography from the University of California at Berkeley. His writing career includes stints as an editor for two national magazines; his freelance work has appeared in numerous publications including Outside and Parenting. He lives in the San Francisco Bay Area with his wife and two daughters.

Try this small hardback 'Gunfire in Barbary: Admiral Lord Exmouth's battle with the Corsairs of Algiers in 1816' by Roger Perkins & K.J. Douglas-Morris, published 1982.

The battle was the culmination of British attempts to "reform" the piracy and slavery practiced by the city. For years the Corsairs had raided way beyond the Mediterranean; had been paid in gold for their good behaviour and sometimes 'gunboat diplomacy' was used.

Not to overlook the participation of a Dutch flotilla.

Fascinating account of the diplomacy, the covert recce of the harbour and city; the small fleet's preparations, the human angles and leadership.

I did like this quote, which seems to have applied in other battles:
Quote:
...the Algerine gunners seemed to have 'learned the Navy List by heart, they took care to avoid every body who would have made a vacancy for promotion'.Quote ends.