Improving the Dissemination of Army Finished Intelligence to the Tactical Force

Improving the Dissemination of Army Finished Intelligence to the Tactical Force

While the fundamentals of intelligence production and dissemination remain the same, advancements in technology have significantly improved the manner and speed in which the Military Intelligence Brigade (Theater) publishes and distributes finished intelligence. As the anchor point for their respective theaters, the MIB(T) must maintain datasets that build the strategic and operational picture to inform and enable the tactical force. More importantly however, it is essential that this data is discoverable by all. The capabilities of web content management systems (WCMS) have proven to make finished intelligence securely accessible to the Intelligence Community (IC), joint force, and tactical force on multiple domains and in multiple formats. Gone are the days of posting finished intelligence products to unit specific SharePoint portals or sent out on limited email distribution lists. These practices waste valuable intelligence analyst time and must be phased out (or only used as a backup for intelligence delivery).

Over the past few years, most of the IC and combatant commands (CCMD) have moved to WCMS’s to host finished intelligence products and provide services to the end user. “A WCMS is a set of tools that provides an organization with a way to manage digital information on a website through creating and maintaining content without prior knowledge of web programming or markup languages.” [[i]] Once content is published to the website, the WCMS can then deliver the information to end users on multiple domains via application program interfaces in various formats to include PDF, XML, HTML, RSS, and KML. In addition, there is extensive metadata behind the content which allows a user to easily filter and find the product they need or to enable RSS feeds. Most news sites today such as “MSN.com” or “news.google.com” use WCMS’s to manage online content and serve it to end users in a variety of formats. Operational examples within the IC & DOD are DIA Source, CIA Wire, U.S. European Command (USEUCOM) JAC, and the U.S. Army South G2 / 470th MIB(T) websites. Users like these sites because they are easy to access, data is easily discoverable, and the data is presented in a visually aesthetic manner.

The WCMSs used in the IC and the DOD also have a cross domain solution which makes it possible to publish to multiple domains almost simultaneously. The WCMS has strict protocols that follow the guidance of the controlled access program classification office classification guide. Once an intelligence product is approved for publication, the author uploads the product to the WCMS on JWICS and it is published to a JWICS website upon one level of review. If classification allows, the product is disseminated to a mirrored SIPR website within minutes once a second reviewer verifies the classification of the content. The system is also capable of publishing products to STONEGHOST or other coalition networks after approval by a foreign disclosure officer. This eliminates the need to manually publish the same product on multiple domains, on different SharePoint portals, or other websites.

Under the regionally aligned force (RAF) construct, tactical units are aligned to CCMDs with a need to understand the cultures, geography, militaries, infrastructure, and geopolitical activity of the countries within the CCMDs Area of Responsibility (AOR). [[ii]] This presents a significant challenge for relatively small all source intelligence sections at the Division and Brigade levels compared to the intelligence production capacity of the MIB(T)’s, Joint Intelligence Operation Centers (JIOC), and national level agencies. While a RAF unit focuses on a specified theater, the Global Response Force (GRF) is required to understand issues around the world in preparation for a rapid response mission making this challenge even greater. During phase 0 (shape) and phase 1 (deter) operations, tactical units shouldn’t be duplicating intelligence production efforts of the strategic and operational levels. Rather, analysts should be pulling finished intelligence products from higher to provide their commander a strategic or operational understanding of the environment. 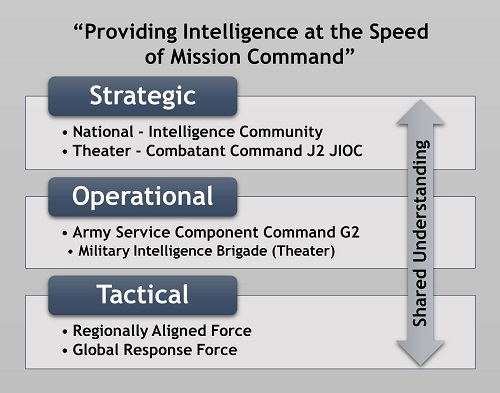 This problem presented itself while I was part of 2nd Brigade Combat Team, 82nd Airborne Division from 2009-2012. 2/82 was assigned the GRF mission and as the intelligence fusion chief I was tasked with providing our commander a weekly update on items of interest from around the world that had the potential for a rapid military response from the United States. Because we were limited to SIPRNET at the brigade level, many of the national or CCMD products were not available as their products were mainly distributed on JWICS. This left my section of about six intelligence analysts reading a plethora of single source and open source reporting before drawing our own conclusions from the information available to us. This was not ideal as we were using intuitive judgement versus the structured analysis practiced at the operational and strategic levels. We were drawing conclusions based on our limited knowledge of the topic whereas larger intelligence organizations have regional or functional subject matter experts and a longer production cycle that allows for more thorough analysis.

a. Intuitive Judgment: “is intuitive, fast, efficient, and often unconscious. Such intuitive thinking is often accurate, but it is also a common source of cognitive biases and other intuitive mistakes that lead to faulty analysis.” [[iii]]

b. Structured Analysis: “is analytic, slow, deliberate, and conscious, the result of thoughtful reasoning. In addition to structured analytic techniques, encompasses critical thinking and the whole range of empirical and quantitative analysis.” [[iv]]

WCMS’s limit the amount of reporting or products an analyst must read as information is more accessible on multiple domains limiting the time it takes to find products that meet your requirements.

470th MIB(T), in coordination with U.S. Army South was the second Army unit to use a WCMS known as Highpoint; the first being 780th MIB/U.S. Army Cyber. Highpoint started as a USEUCOM initiative and has now spread to more than 25 organizations. Almost every CCMD and MIB(T)/ASCC are now using this service. The WCMS uses graphic user interfaces (GUI) that make the upload process simple and efficient. The WCMS has streamlined our all source intelligence production in the 470th MIB(T) as we have moved all finished intelligence production up to JWICS. Once a product is approved and if classification permits it is disseminated down to multiple domains in a variety of formats allowing the customer to easily access the data on their preferred domain. This is essential for elements deployed within the USSOUTHCOM AOR who only have access to SIPRNET, as they can easily access our products through the SIPRNET Highpoint website. Also upon publication, the intelligence product is automatically published to DIA Source and the Library of National Intelligence making Army finished intelligence available to the broader IC. Because of this, several finished intelligence products from our analysts were included in national level read books/products.

“A regionally engaged globally responsive force needs fundamental situational understanding before engagement...The transition from peacetime to crisis may occur rapidly, and as the U.S. military footprint becomes increasingly CONUS-based, it will be more important to build, maintain, and use knowledge to overcome the tyranny of time.” [[v]] Highpoint enables the MIB(T) as the Army Intelligence anchor point for their respective theaters to build and maintain foundational intelligence and disseminate it up and out to the IC and Joint Force but more importantly, down to the tactical warfighter limiting the cognitive burden on the tactical force.

CW3 Martin McCloud was the Production Manager for the 470th MIB(T) ACE from OCT16 to JUL18. He implemented Highpoint within the 470th MIB(T) in support of the U.S. Army South G2. Mr. McCloud is a graduate of the Digital Intelligence Systems Master Gunner Course and has served in a Special Forces Group, Airborne Brigade Combat Team, Military Intelligence Brigade, and an Army Service Component Command. He has deployed in support of Operation Iraqi Freedom, Operation Unified Response, and Operation New Dawn. CW3 McCloud was recently recognized as the recipient of the National Military Intelligence Association's 2018 LTC Arthur D. Nicholson Award.