SWJ Note - This is a multipart series exploring administrative detention in Israel and the occupied Palestinian territory.

Ideas Imprisoned: Administrative Detention in the Occupied Palestinian Territory, Conditions of Imprisonment, and the Role of the International Community (Introduction to 5 Parts)

The Israeli Prison Service (IPS) employs the medical professionals who treat the detainees, which creates a problem of dual loyalty.[i] This causes issues of impartiality towards the patient—the person receiving treatment or the IPS.[ii] Physicians have an ethical duty to their patient, but the physician cannot fulfill this obligation impartially because their employer is also the patient’s imprisoner. For example, physicians of the Israeli Prison Service did not report to the Committee Against Torture the number of suspected torture and ill-treatment cases.[iii] Further, the physicians failed to report injuries indicative of abuse.[iv] Additionally, the IPS often denies the requests of hunger-striking Palestinians for an independent physician visit, which contradicts other IPS directives.[v] In addition to failing to report to the treaty bodies, no reports were found of physicians reporting to anyone. Physicians may have a proclivity of not reporting for fear of employer reprisal.

The Knesset (Israeli Parliament) passed Israel's Prisons Ordinance (No. 48) 5775-2015, “Prevention of the harm of hunger strikers,” which permits force-feeding. The Israeli Prison Services considers hunger-striking a disciplinary offense.[vi] Force-feeding, though, constitutes cruel, inhuman or degrading treatment (CIDT) and may amount to torture.[vii] The High Court of Israel upheld this law despite outcries from human rights organizations.[viii] Force-feeding counters multiple human rights norms. The ICRC opposes force-feeding.[ix] The European Court of Human Rights held in numerous cases that force-feeding may amount to torture.[x] 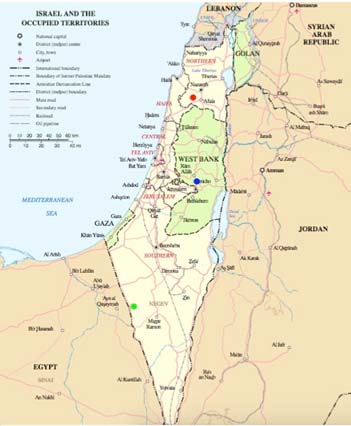 Children are not exempt from administrative detention. Under the Order Regarding Security Provisions, the Government of Israel regarded a child as anyone under twelve (12) years of age.[xxxi] The order defined a juvenile as a person between the ages twelve (12) and fourteen (14).[xxxii] The order defined a young adult as someone between the ages of fourteen (14) and sixteen (16).[xxxiii] Later, the Government of Israel regarded a minor as someone under the age of sixteen (16).[xxxiv] The military finally, in September 2011, amended the order to define a minor as someone under the age of eighteen (18).[xxxv] [xxxvi] The IPS reported two (2) minors in administrative detention at the end of November 2017.[xxxvii] In the broader prison population, though, Palestinian children face particular challenges and concerns. While minors only account for 2% of the broader prison population, they account for 6% of the solitary confined population.[xxxviii]

[i] Physicians for Human Rights – Israel, Right to Health in the Occupied Palestinian Territory and for Prisoners and Detainees in the Israeli Prison System, Submission to the Universal Periodic Review. Para. 2.4.4. (Jun. 2017), http://cdn4.phr.org.il/wp-content/uploads/2017/07/Submission-to-the-United-Nations-Universal-Periodic-Review.pdf.

[v] Supra Right to Health in the Occupied Palestinian Territory and for Prisoners and Detainees in the Israeli Prison System, Para. 2.4.3.

[vi] Israeli Prison Ordinance. Article 56(8), “The following acts are declared to be prison offenses when committed by a prisoner: (8) refusing to eat the food prescribed by the prison diet scale,” http://nolegalfrontiers.org/israeli-domestic-legislation/-prisoners/prisoners019ed2?lang=en.

[vii] Supra Right to Health in the Occupied Palestinian Territory and for Prisoners and Detainees in the Israeli Prison System.

The Court reasoned that the law balances detainee’s right to autonomy and state security. Actually, the law violates the rights of the hunger-striking prisoner, potentially legitimizes torture, and gives the State increased power and control over a prisoner’s body and life, in strict violation of medical ethics, http://versa.cardozo.yu.edu/topics/prisoners%E2%80%99-rights.

[x] In multiple cases, the European Court of Human Rights has ruled on force-feeding using Article 3 of the European Convention on Human Rights, which prohibits the use of torture. (Nevmerzhitsky v. Ukraine (2005), Özgül v. Turkey (1998), and Ciorap vs. Moldova (2007)).

[xi] UN, UN Special Rapporteur on OPT calls on Israel to comply with international law on detention (May 16, 2017), http://www.ohchr.org/EN/NewsEvents/Pages/DisplayNews.aspx?NewsID=21624&LangID=E.

[xxiii] Supra Right to Health in the Occupied Palestinian Territory and for Prisoners and Detainees in the Israeli Prison System, at para. 2.2.5.

[xxviii] Commission Ordinance No. 03.01.00—Rules on the Operation of Prisons for Criminal Prisoners defines the protected ward as: “1. A ward whose purpose is to house prisoners who, due to their negative behavior or to their being at risk or posing a risk, are separated from the rest of the prisoners, and who do not take part in the various prison activities. 2. Life in the ward shall follow a normal routine, with the prisoners in this ward kept separate from the other prisoners in the other wards. 3. Prisoners in this ward are not defined as prisoners held in isolation.” Because the IPS does not define protected wards as solitary confinement, they are neither included in the statistics nor given to any judicial review.

[xxxvi] Supra Convention on Rights of the Child, Concluding Observations 2013.

J. David Thompson
J. David Thompson is a Civil Affairs Major. He has a Juris Doctorate from Washington Lee School of Law. He also holds a BS in Economics and MBA-Leadership from Liberty University. Outside the military, he's worked at the UN Refugee Agency, Department of Defense, and Physicians for Human Rights – Israel. Follow him on Twitter @jdthompson910