How to Stop an Active Killer

How to Stop an Active Killer

The events of 9/11 changed many things.  One thing that changed that day was the mindset of Americans.  Never again will terrorists be allowed to freely takeover a plane with box cutters in our friendly skies.  Passengers simply will not allow it.  We know how that story ended.

Today, in the wake of the Orlando massacre, it’s time to come to grips with the reality of active killer events.  If we did not learn from Columbine, Virginia Tech, Sandy Hook, or any of the other high profile mass killings, let us not repeat the unfortunate mistake of passivity in Orlando.  We know how these events end, too, and we cannot continue to ignore this fact.

Every time a mass killing event occurs, social media lights up with empty calls to action -- "something has to be done" -- or people proclaiming what they would do -- start packing a gun or knife, or play dead. But regardless of the public debates our nation has after each of these tragedies, ultimately, little has changed, especially when it comes to promoting the options a citizen has when confronted with a terrorizing scenario. The media at large talks to the "experts” who primarily focus on gun control issues, which are a divisive issue in and of themselves, and most suggest exit, take cover or conceal oneself. In fact, this is what some places of business tout as their standard operating procedure.

With that in mind, the victims at the club in Orlando did what the experts told them to do. They followed the run-hide philosophy, just like they were taught.  And because of that, dozens died.  This is not to say their deaths were their own fault, but that there is a systemic problem with how American’s have been conditioned to reach. These victims were raised in a school system and a society which had protocols, written by "experts", that insured them this was the course of action to follow, if you wanted to survive. They were told that someone else would come to save them. They did exactly as they were trained to do. That modus operandi failed them, and it failed to the tune of the largest mass shooting in modern U.S. history.

That failure isn't their fault, however. Most Americans are complicit through our individual and collective passivity.  When the Orlando killer check his smartphone social media accounts, spent 28 minutes on the phone with 911, or reloaded his weapons, there were opportunities to intervene, but no one chose to. Now it is time for an awakening, like we had after 9/11.

This is an opportunity for all Americans to arm themselves not with weapons but with basic skills to use to neutralize an active killer. We are huge advocates of training to respond during such events, whether armed or unarmed, but here are a few things to consider (from the many that we teach):

Running and hiding are fine, if they are viable options, dictated by the totality of the circumstance, but ultimately, fighting back might be the difference in your surviving such an event.

Because those on the scene – often civilians - are the first responders, knowledge of basic trauma care is also essential.

As stated, training matters, and whether responders are armed, unarmed, incidentally armed, environmentally armed, or otherwise, practicing engagement in realistic scenarios is ideal, but having a plan of action beyond running and/or hiding is an absolute must. 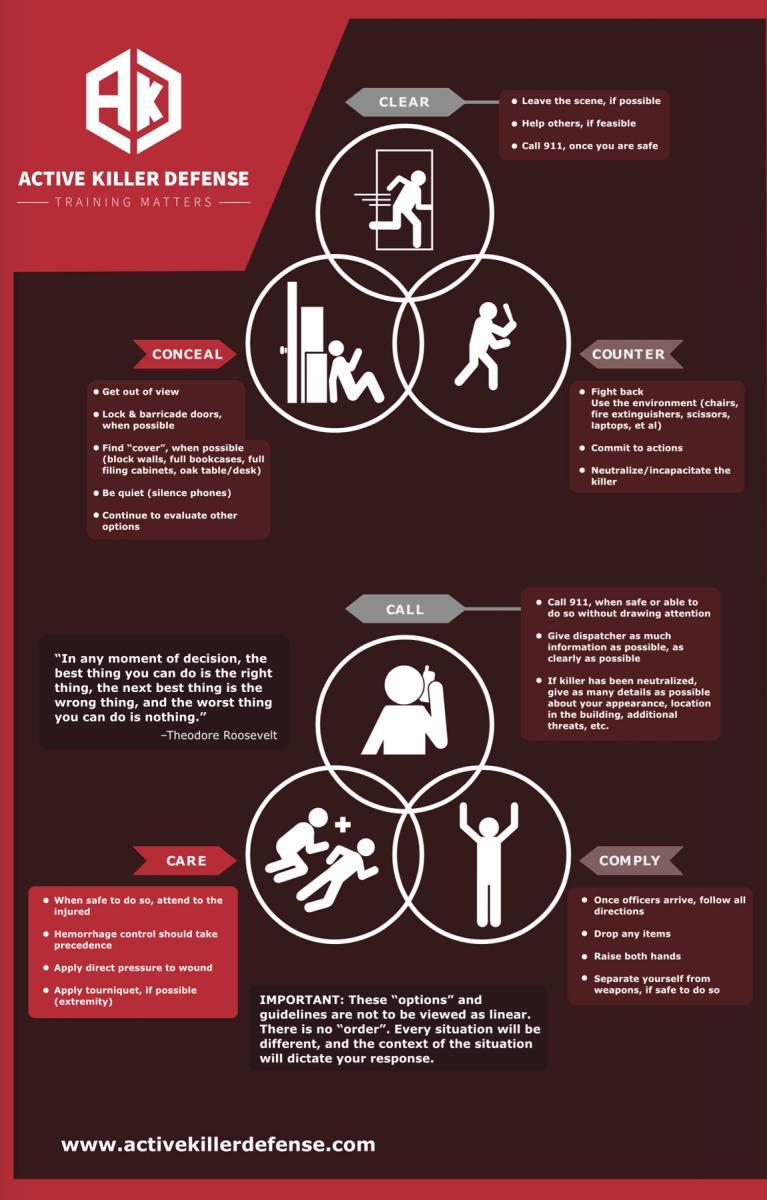 We as a society, have to change the way we think about reacting to an active killer.  Prior to September 11th 2001, hijackers took airplanes as a means to an end, such as ransom or escape to a foreign country of the hijacker’s choice. Military force protection manuals taught military personnel to take window seats in order to avoid harm from the hijackers in the aisle.  That all changed when the likely goal of hijacking was manifested on 9/11.

We now know that we almost have a moral obligation to intervene with force in a hijacking. Why doesn’t the same apply in a nightclub, hospital, or elementary school?

The U.S. is no longer protected from the international form of violence, much less violence perpetuated by lone-wolf assailants. Terrorism experts predict such attacks may actually be on the rise. Whether foreign or domestic perpetrator, most active killers in the U.S. to date did not commit mass murder to further any religious or political agenda, but the damage and community trauma are no less severe.

Those involved in the next active killer situation may not know or care why the person is murdering people and that information will not be known for days or weeks if ever.  Regardless of motives, our response to an active killer, must be the same regardless.  Law enforcement response will take time and the medical response will take even longer.  So why not gather some tools?  Your life may depend on it.

Daniel Shaw is a retired Marine Infantryman with multiple combat tours and instructor titles. He has developed curriculum and training standards for pre-deployment training and Marine Security Forces such as the Fleet Anti-terrorism Security Teams (FAST) and the Naval Nuclear Security Program. His direct action experience includes Level IV VBSS and In Extremis Hostage Rescue. Daniel has been a DOD/USMC firearms instructor for over 16 years and the Director of Training at Thunderbird Firearms Academy for 3 years. He holds numerous instructor certifications from the US Marine Corps to include foreign weapons and master instructor of handgun, rifle/carbine, shotgun, and medium to heavy machine guns.

Ryan Hoover is Fit to Fight® co-founder and trainer of instructors in eight different countries. He is the developer of the Fit to Fight® Self-Defense/Krav Maga program. He has co-authored three books on Krav Maga: KM for Beginners, Black Belt KM and KM for Women. Ryan is a certified natural trainer and speed, agility and quickness trainer. Ryan has taught LEO/MIL courses from Denver to Rammstein and all points in between. Ryan is also the co-founder of the self protection program, Hard Ready™, Pride™ kids program, and Safer Campus Now™ active shooter defense program. Ryan is a Krav Maga Force Training instructor, as well as a Krav Maga Train the Trainer. He has been instrumental in developing defensive tactics curricula at the state level. Ryan owns two training centers in North Carolina.

He can be reached at ryan@wearefittofight.com