On 11 February 2020, the President of the Philippines Rodrigo Duterte informed the United States that he intended to end his country’s involvement in the Philippines-United States Visiting Forces Agreement (VFA). This pact is a cornerstone of US-Philippine military cooperation, and Duterte’s announcement could signal the beginning of a new era in the relations between the two countries. While the termination of the VFA does not necessarily mean a complete end to cooperation between the Philippines and the United States, it does set a precedent that makes continued cooperation more doubtful. Certainly, the Philippines has the right to self-determination. But withdrawing from the VFA could have overwhelmingly negative consequences for the country itself as it grapples with insurgent forces. Additionally, these repercussions could be felt in the Asia-Pacific region as a whole by emboldening Chinese military activity in the region.

In 1998, the United States and the Philippines signed the VFA, a pair of documents which has helped facilitate widespread cooperation between the US and the Philippines. Most significantly, the documents allow for the “entry of American forces […] for joint training with Filipino troops.” 1 Without these documents, hosting bilateral military exercises and sending support to the Philippines could become much more challenging.

The United States and the Philippines have a long, complicated history, colored with both conflict and cooperation. From 1899 to 1902, the two nations fought a war which cost almost 25,000 combat deaths and ended with an American occupation. 2 That occupation was interrupted by World War Two, when Japan invaded the Southeast Asian nation. 3 After costly battles to liberate the Philippines from Japanese occupation, they received full independence in 1946. 2 The Cold War saw a new kind of conflict in the Philippines. In the late 1960s, a number of Communist insurgent groups cropped up in the country, most notably the New Peoples’ Army (NPA), the military wing of the Communist Party of the Philippines (CPP). Subsequent government conflicts with these groups cost another 40,000 lives. 4 The United States supported the Philippine government by sending military advisors to assist in combatting guerilla forces. Although much lower in intensity, these groups remain active in rural areas of the country to this day.

In addition to its ongoing Communist insurgency, the Philippines has struggled with Islamic extremist groups like Abu Sayyaf and (more recently) ISIS, causing mass unrest on the islands of Mindanao and Basilan. This most recent phase of US-Philippine relations began after the September 11, 2001 attacks, when the United States began its Global War on Terrorism and initiated Operation Enduring Freedom – Philippines (OEF-P). American troops began actively training, supporting, and advising the Filipino military in their campaign against these extremist groups. OEF-P successfully curtailed violence in the Philippines, and by 2015 the operation formally ended. But it wasn’t long before a new wave of the same threat materialized. Abu Sayyaf, emboldened by recent ISIS gains in the Middle East, pledged allegiance to ISIS in 2014. By 2017 it had reinvigorated itself into making substantial gains across Mindanao. 5 This culminated in the 2017 Battle of Marawi City, an intense, 5-month campaign by the Filipino military to crush the ISIS stronghold in that city. 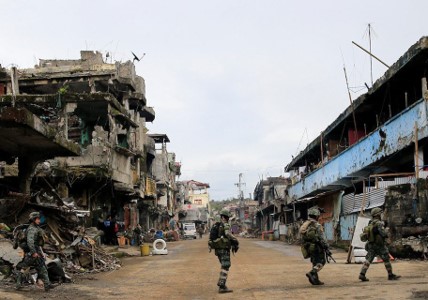 The post-apocalyptic images from the battle look like they could have come from Aleppo or Damascus, and the scale of destruction shocked many on the world stage. In response, the United States began new operations in the Philippines under the name ‘Operation Pacific Eagle - Philippines.’ That same year, US special operations were at work in the country once again, contributing to more than 800 ISIS fighters killed in action. 6 It’s important to note that these efforts were made “at the request of the government of the Philippines.” 7

But combat operations aren’t the only interactions that regularly occur between the two countries’ militaries. The United States and the Philippines conduct regular joint training exercises, precisely the ones that stand to be lost if President Duterte follows through with his stated goal of ending the VFA. These annual exercises (most notably Exercises KAMANDANG and Balikitan) involve thousands of participants, large amphibious landings, and live-fire ranges.9 They are intended to strengthen preparedness and increase cooperation between the two forces. In addition to these exercises, the American military has conducted relief operations in response to a number of natural disasters in the Philippines. Most recently, during Operation DAMAYAN, American forces delivered $37 million in aid to the typhoon-ravaged island-nation.10 Finally, one can’t forget the $550 million in military aid that the United States has provided in the last 4 years alone.11 This money is intended to strengthen the capabilities of a country that has been a historic ally in the Asia-Pacific region.

The United States and the Philippines have a long history of close interaction. More specifically, in the decades since the end of World War Two, America has been an important humanitarian and military ally to the Philippines. The US has helped disaggregate and defeat the various insurgent movements threatening the Filipino people. In turn, the Philippines has provided the US with valuable training opportunities for its military forces in the Pacific. Both countries stand to lose an important ally if relations sour.

The Case for the VFA

With this background, we can come to a deeper understanding about the events surrounding Duterte’s announcement that his country will terminate the VFA. Regardless, withdrawing from this deal could have overwhelmingly negative consequences for the Philippines itself, and for the great power conflict that is occurring in the Asia-Pacific region between China and the United States.

To start, we can assume that decreased internal security support could lead to an increase in insurgent activity. This increase in insurgent activity would destabilize the Philippines and bring more violence and human rights abuses to a country that has already suffered through so much of it. The Philippines has already demonstrated that it struggles to end the extremist activity within its borders. This activity is pervasive and has existed in one form or another since the country’s independence. They have a capable military, but have not hesitated to accept or invite outside assistance from the United States. As stated in the previous section, the United States ended its first counterterror mission in the country in 2015, and the immediate result was a resurgence of extremist activity. This resurgence culminated in the Battle of Marawi City, and left more than 1,000 dead over five months of fighting. While ISIS was defeated in Marawi, the group’s presence is far from over. We should not be surprised, therefore, if violence increases in the country as a result of the termination of international military cooperation. The Philippines is one example in a trend occurring across Southeast Asia as Islamic extremist groups rapidly grow in number and membership. In addition to the Philippines, Indonesia, Malaysia, and Singapore all have growing ISIS-affiliated organizations operating within their borders.13 Reducing American presence in the region could cause a reduction in military readiness in these host nations’ militaries, which could in turn create a gap which extremist organizations could exploit. As Joseph Chinyong Liow stated, the extremist threat facing these southeast Asian countries is not new; many of them have faced extremist groups in one form or another since gaining independence.13 But this only strengthens the argument that these countries require support in fighting such deeply entrenched movements within their borders. Reducing American support in the region, especially in the Philippines, will harm the fight against these movements.

Finally, we should expect to see China emboldened by the termination of the VFA. The Asia-Pacific region is increasingly one of bipolarity. If US influence decreases, Chinese influence should be expected to move in and fill the void. This influence could even be sought by Duterte himself, who has recently shown interest in drawing Chinese financial investment into his country. In 2016 alone, he “secured $24 billion in investment, credit, and loan pledges from” China.14 Through its Belt and Road Initiative, China has made clear its intent to increase its investments around the world in exchange for increased economic, political, and military power.15 In one late-2019 case, China offered up a majority stake in a potential natural gas venture, buying resources and influence from the Philippines.12 Duterte is seeking to fill the American void with Chinese money, and ending the VFA sends a strong signal to China that this rift is real and ready to be exploited. China’s push for increased influence is destabilizing the region. Ending the VFA and paving the way for increased Philippine-Chinese cooperation will exacerbate the ongoing great power competition in the Asia-Pacific region.

As a sovereign nation, the Philippines has every right to determine who it aligns itself with. But every effort must be made to maintain ties between it and the United States. This effort starts with the continuation of the VFA. It’s in the best interest of both nations.

13. Chinyong, Joseph. “ISIS in the Pacific: Assessing terrorism in Southeast Asia and the threat to the homeland.” Brookings. April 27, 2016. https://www.brookings.edu/testimonies/isis-in-the-pacific-assessing-terrorism-in-southeast-asia-and-the-threat-to-the-homeland/

14. Chandran, Nyshka. “The Philippines’ pivot toward China has yet to pay off, as Manila awaits promised funds.” CNBC. November 23, 2018. https://www.cnbc.com/2018/11/23/chinese-investment-in-the-philippines.html

Cooper Strand is an active duty Second Lieutenant in the United States Marine Corps. Prior to his military service, he received a B.A. in political science, with minors in Spanish, history, and international studies from Texas Tech University. Cooper is also a volunteer staff member for The Emiliani Project, a non-profit organization dedicated to serving orphaned and abandoned children in Colombia. He has served in Medellín, Colombia three times.