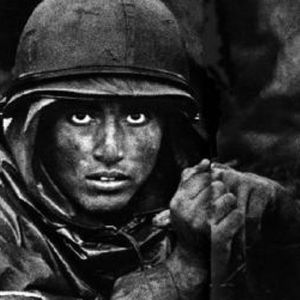 The “thousand-yard stare” from an infantry officer talking about his time in Iraq; routine bursts of anger from a former soldier who watch his friend step on an IED; a seasoned NCO who  exited his track only to turn around and desperately scream to get back inside.  Despite the myriad of training maneuvers, large-scale training center rotations, life-fire exercises, shoot-house drills, etc... nothing in training really prepares one for the visceral ugliness of combat.  Assuming it is possible, how does one correct this in order to better prepare our forces for their eventual deployment to a hostile zone?  How does one replicate the complex scenarios and subsequent decisions involved when lives really aren’t “on the line”?

I recall speaking to a fellow infantry major who had served as a company commander in Iraq sometime in 2004-2005.  He was telling us about a particular day when his company was ordered to hold a part of a small town.  He told us of a boy, about 10 or 11, who was wearing a radio-controlled suicide-vest and was approaching the checkpoint he was at with his soldiers.  At this point, I could see that he was no longer looking at us but was looking back a thousand yards.

The child continued to approach despite his soldiers and interpreters shouting at him to stop.  Some soldiers were demanding to open fire while others were screaming that shooting a child was illegal.  The commander gave the order to shoot.  After the child fell, he detonated.  The commander made a good call, he saved his men.  But that’s not what he remembered, only the voices of those who criticized him for shooting a kid.

They eventually learned that the child’s family had been kidnapped, and the boy ordered to wear the vest to kill Americans or the family would be killed.  Either way, that kid was destined to die either by bullet or bomb.  But no one prepares for that in training.

The former soldier who watched his best friend explode was the son of our neighbor.  He had returned from Afghanistan a couple of years prior and was dealing issues related to the deployment.  He eventually left the active Army and joined the National Guard.  Prior to deploying, this soldier had been a fairly easy-going kid.  But since this incident, he’s been prone to quick outbursts of rage, zero to sixty in seconds.  His wife apparently works overtime to ensure he doesn’t hurt himself or others when he’s in a rage.  He’s known in his Guard unit as being really uptight regarding PT and combat preparedness (understandably I suppose).  It seems he has trouble getting rid of the image of his friend taking that final step.

During my last Iraq deployment, one of our NCOs told us about a seasoned NCO in a previous unit who didn’t seem that seasoned during his first deployment.  They were in a mechanized unit and dismounting at an intersection while under fire.  The NCO poured out with his soldiers and the ramp went up.  As the soldiers moved forward, this seasoned NCO was heard screaming at the Bradley to drop the ramp and let him back in.  He eventually started banging on it demanding to be let back in, which he was.  We were told he eventually overcame his fear, even deploying again, only to die during that subsequent deployment.

I’ve never experienced the moral quandaries, or gut-wrenching loss, or absolute fear described above.  I do recall being a bit worried about the rockets landing near us or wondering if the machine fire I was hearing was going to be followed by rounds impacting around us.  But nothing life-changing.  The training I received during my career fit what I experienced in “combat”.  But not all can say that.

In previous articles for Small Wars Journal, I’ve tried to present a possible solution to ideas I laid out in my writings.  As commanders and leaders often say, “Come to me with solutions, not problems”.  But this time, I don’t have any solutions, and hope to hear from those smarter than me who may have some good ideas on how to better prepare those who will go into harm’s way.

I wish I could think of ways to enable troopers in peacetime to learn and even experience (in some safe fashion) these incredible spectacles....perhaps through routine, interactive meetings with active and former soldiers willing to share their memories; or through an immersive environment (virtual reality programs?) that show the horrors of a firefight or IED blast, or the moment a child becomes a clear and present danger to be neutralized.

I’m certain that such events are present in large-scale wars as well as small ones like Afghanistan & Iraq.  Both, I’m sure, expose one to actions none of us train for or even anticipate.  Maybe an experienced combatant can provide some solutions for better, more realistic training.  I certainly hope so because looking back a thousand yards didn’t look like a pleasant experience.

Morgan Smiley is a DoD civil servant and a retired U.S. Army officer.