Mexican crime statistics tend to elicit one of these reactions: 1) Optimistic disbelief: Have not seen anything in the news lately so surely it is getting better; can’t believe those numbers since it cannot possibly be that bad; the Mexican economy is growing, tourism is flourishing; Mexico’s beaches are the best! 2) Pessimistic disbelief: You can never believe the Mexican government statistics; it is actually much worse than what they report; what about the thousands of missing people, secret graves, and crimes never reported? 3) Numbers don’t matter. Mexico has always been corrupt and violent. Build the wall.

The Mexican agency known as the Executive Secretariat of the National System of Public Security (SESNSP, a unit under the Secretariat of Governance or Gobernación, SEGOB, responsible for internal security in Mexico) releases monthly crime statistics available on the internet. The latest SESNSP report was released on April 20, 2018 and covers crimes including homicides, kidnapping, extortion, and human trafficking, among others. The data provided are described as “crimes reported in preliminary investigations initiated under the jurisdiction of the state prosecutors and Attorneys General in the 31 Mexican states.” The most recent release provides information on the numbers of victims of these crimes for the first three months of 2018.[i]

The monthly numbers reported by the SESNSP are considered preliminary in that the data originate in initial police and Public Ministry criminal investigations. However, these statistics have been consistently reported and made available online by this agency for several years and thus generate an internally consistent dataset.[ii]

The other main source of statistics on homicides is the Instituto Nacional de Estadística y Geografía (INEGI). INEGI releases homicide data in a more finalized form that becomes available in July of the next year from the period being reported. INEGI homicide data are compiled from death certificates issued by Civil Registries in each state in which a medical examiner has determined the cause of death to be homicide. The latest available cumulative INEGI report was released in July 2017 and reports total homicides from 2007-2016.[iii]

While I agree somewhat with the pessimist noted above, the fact that these statistics are imperfect and incomplete does not mean that they are worthless. Crime statistics around the world provide little uniformity, but such numbers are still an essential tool for comparing rates of violence in different countries, regions, and cities around the globe.[iv] 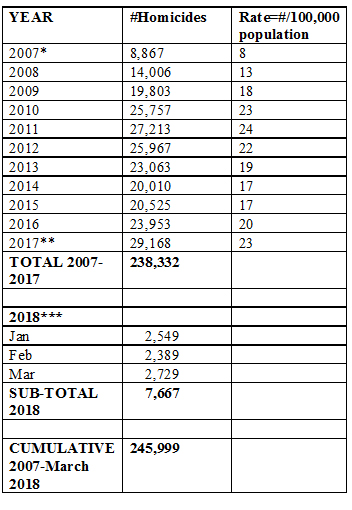 In general, these numbers show a sharp increase in homicides beginning in 2008, rising to a peak in 2011 at the height of the so-called “drug war.” Homicides decreased slightly from 2012-2015 and then began to rise again in 2016. The total of 29,168 victims in 2017 was the highest number of homicides recorded during any year for which these data have been reported. During 2017, an average of 80 people per day were victims of homicide in Mexico. While this raw number is higher than for any other year, the highest murder rate (number of homicides per 100,000 people) was recorded in 2011. The lower murder rate of 23 in 2017 most likely results from population increase since 2011.[v] For the sake of comparison, the United States murder rate in 2016 was 5.3 according to the latest data from the FBI Uniform Crime Reports.[vi]

It is important to note that these statistics do not account for the thousands of people reported missing and/or disappeared. The Mexican National Human Rights Commission reported at least 30,000 missing people as of the end of 2016.[vii] The official Mexican government missing persons database (also a part of the Mexican Public Security Secretariat under SEGOB) maintains records on more than 34,000 missing or disappeared persons.[viii] Families often organize their own informal support groups to search for disappeared relatives in some of the most dangerous regions in Mexico, including Veracruz, Tamaulipas, Guerrero, Michoacán, and Chihuahua. Few people express trust in the Mexican government’s efforts to find people who are reported missing. Indeed, families often report that their missing loved ones were last seen in the custody of police or military. To provide just a few representative examples from tens of thousands of media accounts:

Mexico City, February 2018: “Police detained Marco Antonio near a city bus stop where he was taking pictures of graffiti, a friend who was with him said. The officers accused Marco Antonio of attempted robbery, beat him, handcuffed him, and drove him away in an official vehicle, local media reported.”[ix]

Ciudad Juárez, Chihuahua, March 2011: “In March, municipal police officers detained the two brothers of Armida Vazquez and whisked them away in patrol cars. Vazquez and her mother searched for Dante and Juan Carlos, cellphone shop workers in their mid-20s, and checked with the local and federal police here, to no avail. Nineteen days later, the strangled bodies of the brothers were found on the outskirts of this notoriously violent city. Witness testimony and other evidence led to three policemen, now in jail awaiting trial. But the police pushed back. Policemen in civilian clothes, Vazquez says, approached her mother outside church and told her to stop making trouble. When Vazquez made a statement against the suspects last month, she says other policemen and relatives of the officers threatened her outside the courthouse. Terrified, 20 members of the Vazquez family packed their bags and fled across the U.S. border to El Paso, Texas, a short trip into a world of gleaming shopping malls, well-kept highways and safe neighborhoods.”[x]

Ejido Benito Juárez, Chihuahua, December 2009: “The soldiers took them in the night. First they came for Nitza Alvarado Espinoza and Jose Alvarado Herrera. The 31-year-old cousins were sitting in a van outside a family member's house when troops forced them into a military truck. Minutes later, soldiers arrived at the house of another Alvarado cousin, 18-year-old Rocio Alvarado Reyes. She was carried away screaming at gunpoint in front of her young brothers and baby daughter. It was Dec. 29, 2009 — the last time the cousins were seen alive. Exactly what happened to the working-class family from Ejido Benito Juárez, a dusty town in the northern Mexican state of Chihuahua, is the subject of a landmark case that will be heard beginning Thursday by the Inter-American Court of Human Rights.”[xi]

Considering the reality of the unknown number of the disappeared who have been killed, the cumulative Mexican homicide statistics for the 11-year period in the table above (245,999) should be considered the minimum number of victims. Add at least 30,000 disappeared for a possible total of 275,999: more than a quarter of a million violent deaths and/or disappeared people in a little more than a decade—an average of 69 people per day.

If the homicide rate is the measure, Mexico is not the most violent country in the hemisphere, but shares this dark spotlight with other populous countries in the region, now undergoing a crisis of violence. In a new study released on April 26, 2018, the non-governmental Igarapé Institute in Brazil reports: “Latin America suffers 33% of the world’s homicides despite having only 8% of its population. One-quarter of all global homicides are concentrated in four countries – Brazil, Colombia, Mexico and Venezuela.”[xii]

According to data reported by Insight Crime, Venezuela was the most violent country in the region in 2017 with a murder rate of 89 per 100,000. The Observatorio Venezolano de Violencia reported more than 26,000 murders in 2017. Furthermore, El Salvador (60), Jamaica (56), Honduras (43), Brazil (30), and Guatemala (26) all reported murder rates higher than Mexico’s in recent years. There were more than 61,000 murders in Brazil (the most populous country in Latin America) in 2016, and Insight Crime notes that security conditions in Brazil are getting worse. See: https://www.insightcrime.org/news/analysis/2017-homicide-round-up/

For the first three months of 2018, the Mexican SESNSP statistics indicate that an average of 85 people per day are victims of homicide in Mexico. This is an increase over the totals from late in 2017 and continues the upward trend in violence. If these numbers were to continue through all of this year, more than 30,000 people will be murdered in Mexico in 2018. The recent numbers also show that epicenters of violence continue to “hopscotch” around the country. States with the highest numbers of homicide victims according to the new report are:

The statistics skeptics mentioned above also include many who criticize the focus on numbers and rather insist that we should focus more on the humanity of the victims. I would argue that it is impossible to fully appreciate the suffering that stems from this societal crisis without accepting and trying to understand the orders of magnitude of the violence. And for that, we need numbers. I will cite just one example of many that can offer a startling comparison: In 2013, the Colombian National Center for Historical Memory published its report on the civil conflict in that country which concluded that at least 220,000 people were killed in the 54+ years of civil conflict between 1958 and 2012.[xiii]

The violence in Mexico—much of which is attributed to conflicts between organized crime groups and the government’s militarized response—has resulted in at least 240,000 homicides in only 11 years. There are certainly differences in population (current estimates: Colombia 49 million; Mexico 130 million) to consider, as well as differences in the political and social conditions in each country over time, but just considering the raw numbers, Mexico’s recent experience of homicidal violence is startling.[xiv]

We must also note that the Mexican government during all of this past decade of hyper-violence, has continually stated without evidence that 90 percent of homicide victims are members of drug cartels, thus branding tens of thousands of slaughtered Mexicans as criminals killing each other. More than 95 percent of homicides are never fully investigated by law enforcement. The government never acknowledges that the violence began its steep rise in parallel with President Calderon’s deployment of the Mexican Army into the so-called “drug war,” with support and billions of dollars in military and security aid from the United States.

After ten years of increasing violence and the metastasizing drug gangs, in December 2017, the government passed a new law that further empowers the Mexican military to act domestically against “internal security threats,” thus expanding and providing formal legal authority for the militarization of law enforcement. This same policy and practice in place since 2007 has coincided with the violent intentional homicides and forced disappearances of at least 250,000 people in Mexico.[xv]

[i] The full report is available here: http://secretariadoejecutivo.gob.mx/docs/pdfs/nueva-metodologia/CNSP-V%C3%ADctimas-2018.pdf

The SESNSP statistics are provided in several formats and are now updated each month at this link:

[v] The 2017 population estimate was 129,163,276 according to: http://www.worldometers.info/world-population/mexico-population/

Molly Molloy is a retired research librarian and border and Latin American specialist at the New Mexico State University Library in Las Cruces, NM. She is the creator and editor of the Frontera List, a forum for news and discussion of border issues. Since 2008 she has provided detailed documentation of homicides in Mexico, with an emphasis on Ciudad Juarez. More than 11,000 people have been murdered in Juarez since 2008, making that border city the epicenter of the recent hyperviolence in Mexico. She translated and co-edited El Sicario: The Autobiography of a Mexican Assassin (Nation Books, 2011) and has written for The Nation, Phoenix New Times [here and here], Narco News Bulletin, and other publications. Molloy is often called upon to consult with academic researchers, attorneys and journalists about the violence in Mexico.