Homeland and Security at the Local Level: A Public Policy Conference

Homeland and Security at the Local Level: A Public Policy Conference 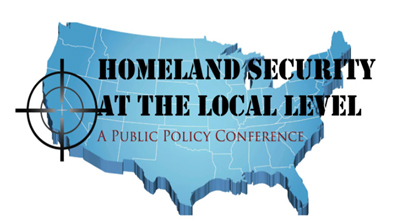 A half-day conference entitled Homeland and Security at the Local Level - A Public Policy Conference was held at Claremont McKenna College on Friday 24 March 2017. It was hosted by the Inland Empire Center for Economics and Public Policy in coordination with the Lowe Institute of Political Economy and the Rose Institute of State and Local Government, both of Claremont McKenna College. The County of Riverside and the City of Adelanto were major and municipal sponsors of the event, respectively. The audience was comprised of one hundred individuals from academia, local government, and the law enforcement and responder community.

The conference commenced with welcoming remarks by Dr. Andrew E. Busch, Director, Rose Institute of State and Local Government, Claremont McKenna College. A keynote address by Elijah “Eli” Owen, Deputy Commander, State Threat Assessment Center, California Office of Emergency Services was then delivered.  Two panels were subsequently provided—the first on readiness and the second on response. Closing remarks were then provided by Dr. Busch who gave a short conference summation and a thank you to the various participants taking part in this public policy focused event meant to bridge the perspectives of theorists and academics with that of local law enforcement officials and practitioners. 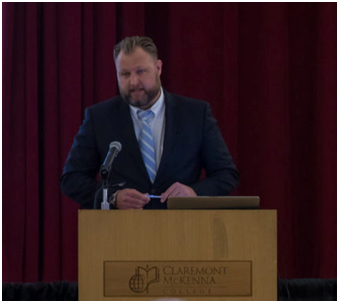 Eli Owen delivering his “One Team, One Fight” keynote address 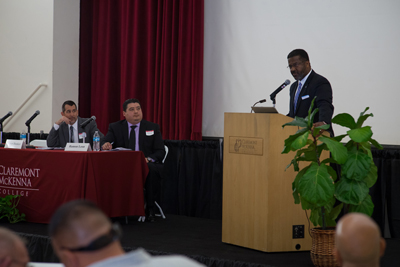 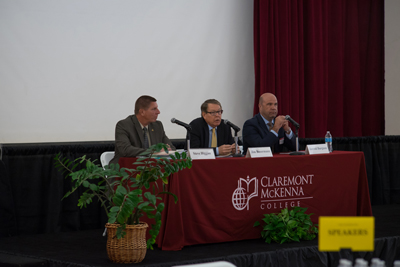 Key conference insights and lessons learned are as follows:

• The Federal Bureau of Investigation has conducted approximately 1000 investigations on homegrown violent extremists throughout the United States. These extremists used to focus their attacks on mostly law enforcement officers or the military. Now, these extremists are also focused on attacking civilians (soft targets). There is an increase in attacking civilians because most soft targets lack the advanced training, equipment, and resources to fight back. [Owens]

• A ‘goldilocks zone’ for security and democratic freedoms exists between the extremes of a police state (tyranny) and anarchy (negligence). This zone relates to the pendulum effect of shifting terrorism perceptions which result in an overreaction immediately following a major attack and an underreaction when no such attacks have taken place for some years. [Bunker]

• The Emergency Management Department plans and prepares for different major incidents ranging from earthquakes, storms, to terrorist attacks. Planning should be based on top hazards. There should always be an assessment on the probability of a crisis occurring and the impact of the hazard. [Leon]

• The focus should be upon the importance of “staying ready” and not having to “get ready.” Readiness requires leadership, partnership, and agility. Leadership focuses on unifying command imagery and providing the correct facts to the media and public; Partnership is required to stay in the fight against terrorism; and Agility represents the ability to move quickly in order to respond to a credible threat. [Woolery]

• There is a lesson to be learned from each critical incident and a review is needed to improve responses in the future. [Bueermann]

• Law enforcement responses to mass shootings have drastically changed since the shooting at Columbine High School. The officers were trained to set-up, contain, and request specialized tactical units. Today, law enforcement officers receive active shooter training and engage immediately with the threat. The response for incidents involving active shooters changed because of learning from past mass shootings.  [Burguan]

• There needs to be an assessment of critical incidents because this will lead to improvements in future counterterrorism response. Law enforcement officers are humans and will make mistakes during critical emergencies. Police work is not an exact science and often deals with evolving situations. [Higgins]

•  The federal 1033 program is important because it helps law enforcement officials in responding to terrorist attacks. The BearCat (Ballistic Engineered Armored Response Counter Attack Truck) vehicles can be used as ambulances to transport injured people or protect officers and the public. The media has distorted the 1033 program and referred to it as the “militarization of the police” which is not the correct depiction. [Higgins] 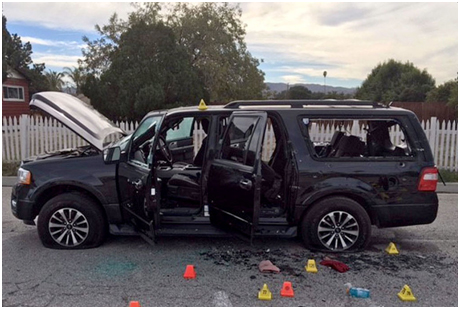 After Firefight with Law Enforcement

In tandem with the conference, a special issue of Inland Empire Outlook (Spring 2017) titled “We Remember: San Bernardino, December 2, 2015” was produced. This publication focuses on the events surrounding the San Bernardino mass shooting and the law enforcement and emergency medical response as well as providing context related to past terrorism attacks taking place in California and a history of state legislative responses to terrorism.

On December 2, 2015, Rizwan Farook and Tashfeen Malik launched a devastating attack on the Inland Regional Center (IRC) in San Bernardino, California. Resulting in the death of 14 innocents and the injury of 24 others, the San Bernardino shooting in 2015 was the deadliest terrorist attack on the United States since September 11, 2001. It was also the worst mass shooting since Sandy Hook in 2012… San Bernardino also reminded the American people that the first line of defense against domestic terrorism is not soldiers armed for war, but rather local police, medical, and fire services… The response to the shooting can be broken into four distinct stages: the initial response to the attack, medical treatment and evacuation of the victims, pursuit and elimination of the gunmen, and conducting the investigation. Each part of the response presented different operational challenges… If the operation had not been executed cleanly, then there could have been far more casualties. There were points during the attack that could have strained the response leadership to the point where confusion overwhelmed emergency personnel. First responders, however, had already forged many inter-agency personal connections that allowed them to better navigate the hectic situation.

This article is illustrative of the scholarship and informative nature of the works contained in that publication which have great utility for the policymakers, counterterrorism scholars, and first responders who seek to safeguard the American public from the scourge of terrorism threatening them and the democratic institutions that they so cherish. For more information on this conference, contact roseinstitute@cmc.edu. Copies of the Inland Empire Outlook are available at www.roseinstitute.org.