In order to better understand the phenomenon, I conducted a grounded theory study in which I interviewed 21 federal, state, county, task force, and local chief law enforcement officers with jurisdictions along the Southwest border of the United States.  The average years of law enforcement experience of the participants was 22 years.  Some of the jurisdictions were rural and some were urban.  Some jurisdictions were located directly on the border and others were located over 400 miles from the border.  Some jurisdictions were on major drug trafficking corridors and others were not.  Some of the participants claimed cross-border violence did not exist and others claimed that cross-border violence was bad in their jurisdictions.  There were numerous findings of interest.

In my opinion, no, there is not cross-border violence.  The violence is something that has always been here.  If we were really serious in shutting down the border, we could do it.  It is always political because it (drug trafficking) helps us economically which keeps it (violence) going.  The border has become an issue due to politics and news.  It is nothing new to me in my 20 years as a cop.  It has always been here.  Sure, there are kidnappings, murders, and other violent crimes committed in the United States by them (DTOs).  Your regular violent crime (committed by drug traffickers in my jurisdiction) is about a five (on a scale of one to ten).

The other participant stated,

Their argument is more premised on an objection to the term cross-border violence.  They are not arguing that Mexican drug trafficking organizations do not commit violent crimes in the United States.

In addition, almost every participant stated that threats of violence were incidents of cross-border violence.  This adds a great deal of complexity to the issue since Mexican drug trafficking organizations use at least implicit threats of violence.  It is known that if you do not pay for a kilo of cocaine, Mexican drug trafficking organizations will kill you.  One participant said it best, “you do not have to be told not to put your hand in a fire.”  If threats of violence are added into the equation, the level of cross-border violence would be extremely high.

“They used to stay low key but that is a thing of the past.  Now, they are relying upon fear.  Fear is moving the possibility of violence into the United States.  The fear is a very real fear.”  Another participant stated  “It is big counties with little budgets that are cashing in on it.  It behooves them to have it present.  They are selling it and the time is now.”

The majority of the value of cross-border violence is fear of what could be? …However, we are lucky the violence is only spilling over the border a little at this time.  We couldn’t handle some of things that police in Mexico respond to.  I don’t think we are truly prepared.

“Cross-border violence in my jurisdiction is more of a what-if than reality, a what could be.  We do not want to turn into Mexico.  It is definitely a concern.”

Another important theme was that there is not a specific distance from the border where cross-border violence no longer exists.  It can occur throughout the entire country.  Most of the participants of the study stated that cross-border violence likely spreads out as opposed to reduced the further one goes North from the border.  The argument appears to be sound since the drug trafficking networks spread out throughout the United States similar to a spider web.  In addition, it is well known there are well over 1,000 cities throughout the United States that have a Mexican drug trafficking organization presence [5].

Figure 1 – Crimes most commonly committed by Mexican drug trafficking organizations in the U.S.: 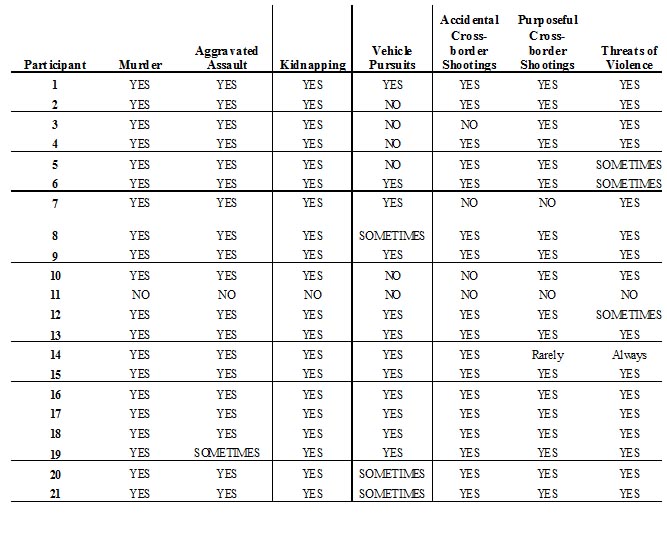 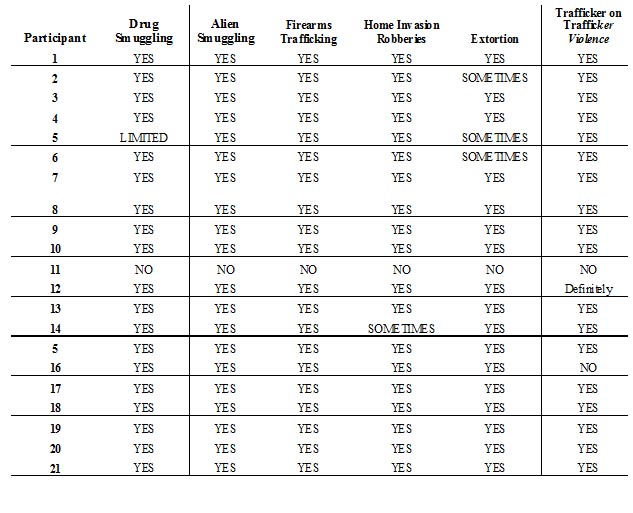 Participants, almost exclusively, stated transnational, street, prison, and motorcycle gangs are associated with drug trafficking organizations.  However, there was disagreement as to whether or not incidents where Mexican drug trafficking organizations give orders to gangs to conduct violent acts on their (DTOs) behalf are incidents of cross-border violence.   One participant stated, “gangs do not commit cross-border violence because they already commit violations here and are just another arm of the drug trafficking protection racket.”  Another participant stated “They carry out events that further their own activities in the United States.  There is a co-dependence to obtain drugs and move narcotics.”  One participant stated “Gangs operate under the umbrella of TCOs (Transnational Criminal Organizations) but they are not actually the TCO.  Since they are not mutually exclusive, I would have to say that most gang activity is not cross-border violence even if (they were conducted) at the direction of TCOs or DTOs (Drug Trafficking Organizations).”

I would argue to a degree we are already "seeing" similar violence---the problem lies in the way the police report the violence and "who" they place the violence blame on in their statistical reporting to say the FBI.

With cartel activity in virtually every major US city (over 1600 at last count) and if you noticed from the article how they are tying the various US gangs/group onto them they are building what the military calls "capacity" especially the ability to move drugs from end to end and to enforce those movement/cash policies.

This is the key they want to control end to end nothing more nothing less thereby ensuring that the anticipated cash flow remains as they dictate it should be.

Check beheading reports out of say OK or the in the open ambushing of a DEA informant in front of an entire DEA observation team in Houston---when needed they do in fact go "violent".

What is interesting in this article is the uneven view held by the various police activities that were interviewed---actually the same unevenness reflected in US media reports on cartel activities.

You mentioned El Paso---what has not been heavily reported the general US media has been the "hiring" of Ft. Bliss active duty US soldiers to do the killing of Mexican police---what has been reported is the cartel's hiring of former US soldiers with war experience.

The fact that standardized definitions for the terms and concepts regarding what "Spillover violence" means don't seem to exist anywhere limits the utility of having a discussion on the topic. There is a distinct difference between the worst case "spillover violence" and violent crime committed by cartel members in the US. Sometimes it is difficult not to fear a rise in the United States of the kind of violence reported in Mexico that shocks the conscious. Bodies disemboweled and hung from overpasses, bus loads of migrant workers hijacked and forced to fight to the death, mass graves, firefights in the streets, force-on-force confrontations between large groups of cartel members, car bombs, and grenade attacks are what people really fear the most. When they hear of these things occurring just over the border they wonder how long until that kind of stuff starts happening in the US. I think most SWJ readers realize how unlikely that it is but members of our society who rely on headlines for their information and only read about the extreme cases of Mexican violence may not have the same perspective. That murders, kidnappings, beatings, vehicle pursuits, and cross border shootings are committed by cartel members and affiliates is no surprise. People I have spoken with want to know is whether it will or will not get worse and if we think it will, how much worse is it going to be. And if inter-cartel violence is possible in the US, why hasn't it already happened? If it is going to happen at all it seems like it would have happened between Juarez and El Paso two-three years ago. While thousands of people were dying in violence in Juarez, there were hardly any violent deaths at all in El Paso.

Personally I think the answer is multi-faceted. The US has stronger institutions, more-motivated and less-corruptible law enforcement officers, and while it is not far from northern Mexico the US southern border region is still not Mexico and cartels simply do not have the same kind of presence there that they do at home. More importantly though, large-scale inter-cartel violence is not likely in the US because the game that drives the violence in Mexico changes once the drugs get across the border. Cartels in Mexico mostly don't kill just for the sake of killing. Instead they fight over infrastructure. Take a look at a map and you can identify the hotspots by following the roads between ports of entry on the border and where they meet other major highways. Major conflict areas usually always have a port of entry or at least one major road running through it. Roads and POEs are the best routes for running the largest amount of illicit goods. They are a resource and a scarcity of that resource leads to violent competition among those who seek to control it. Once over the border the drugs are usually handed off to middle men and moving drugs becomes less of a Cartel concern. The robust infrastructure and the fact that cartels cannot wield significant influence over politics and law enforcement in US municipalities removes any ability/incentive to fight over them. Ultimately, it is difficult to project a scenario in which the type of violence we see in Mexico occurs regularly in the United States. While murder is always tragic and incomprehensible, inter-cartel fighting is mostly a means to an end and fortunately for the United States that "end" is found south of the border.

Absolutely great to see this kind of research being conducted especially by civilians ---the results are interesting in that it took an average cross section of the LE community and it "listened" to them even if their comments could be seen as not supporting the research.

Example---during the 80s we at the Refugee Center in Berlin (JAROC-B) started creating a similar style of questioning and would give the refugees questionnaires that were focused on specific events or ongoing discussion trends inside the DDR---we were actually on many occasions surprised to see that the responses did not agree with what we were assuming.

Granted the results were not "scientific" but it gave us an edge in actually "understanding" specific events in the DDR say the peace movement that eventually led to the mass demo in Leipzig that was the precursor to the Wall coming down.

Which by the way we reported as going to occur and we were actually within a really close timeline to actual events in our predictions----all we heard from the national IC was laughter when we sent the reports in---again based all on the questioning of refugees.

Now comes the kicker the IC refused initially to view the results as they were not "scientific" but when our reporting led the actual events by a few weeks then they paid attention and wanted more.

Keep this going as it adds to a very critical developing issue that I maintain is far more dangerous than anything AQ can conduct against us in the coming ten years.

It would be interesting to know:

1. How DTO violence compares to domestic gang drug violence in those jurisdictions. Is it higher, lower, or the same?

2. Who are the DTO’s? Are they the notorious cartels everyone is familiar with or some unknown DTO’s?

3. The states where these jurisdictions are located.

Wasn’t the 1000 city number debunked or at least questioned recently?

Would love to read this entire study if it becomes available.