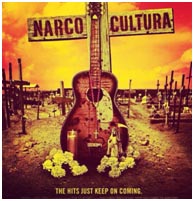 “Narco Cultura,” a documentary by Israeli photojournalist Saul Schwarz (run-time 103 min.), was billed on its website as “an explosive look at Mexican drug cartels’ cultural influence on both sides of the border.”  It is indeed a salient exploration of narco-culture (narcocultura) and its impact on cross-border society.  The film is more accurately a tale of three cities in the “drug war zone”: Ciudad Juárez in Chihuahua; Los Angeles, California; and Culiacan, Sinaloa.  The story unfolds in the midst of the Sinaloa Cartel’s invasion of the plaza (Cd. Juarez). As the Cartel de Sinaloa fought the Cartel de Juárez (Juárez Cartel) in a four-year struggle for control of the El Paso-Juárez plaza for transshipping drugs, approximately 10,000 persons were killed. During that timeframe Cd. Juárez became the world’s most dangerous city.

Schwarz uses the narco-battle for Juárez to expose the horror and barbarization of the drug war.  In Juárez, we see the valiant crime scene technicians (peritos) of SEMEFO (Servicio Médico Forense, the medical examiners service of the Chihuahua state prosecutor (Fiscalía General del Estado-FGE) toil tirelessly under great personal risk to document the aftermath of executions.  As they do so, we see one protagonist investigator, Richi Soto, come to grips with the threat. During the course of the film, four of his colleagues fall victim to the cartel sicarios.  His boss resigns under threat of death.   The peritos can only document the killings.  The community derisively calls them “collectors of bullets.” Impunity reigns. Less than three percent of the deaths investigated actually see criminal prosecutions; only about one percent result in convictions. Just as Schwartz chronicles the impunity and its results, an Angelino singer Edgar Quintero chronicles the cartels’ exploits.

For Quintero, the American singer from Los Angeles, the cartels are the rising social force—all things narco are sexy and socially relevant.  Beyond that, the Sinaloa Cartel reigns supreme. Its capos—“El Chapo” Guzman and “El Mayo” Zambada—the feudal drug barons of the Sinaloa Federation are the most powerful (mas poderoso). Quintero extols their virtues to a nightclub following seeking rich and powerful heroes. The narcocorridos liken the narcos to “Robin Hoods.” Here mafiosos (who frequently commission the ballads) embrace the role of social bandit. Quintero and his band “BuKnas de Culiacán” sing about the drug war.  Using AK-47s and a Bazooka (actually an inert AT4) as a prop, they hail the recent exploits of the sicarios and the power of the capos.

Narcocultura is on the ascendency. Narcocorridos are not new.  This genre of music has its roots in folk music and norteño ballads.  Like Pancho Villa, who was venerated in song during the revolution, these ballads extol the virtues of those who rebel against the corrupt state.  The poor and powerless look for symbols of power and rebellion.  Yet the narcocorrido is more than Hip Hop or gangster rap south of the border.  It is not only a form of cross-border musical social commentary; it is a means of cartel information operations and a vehicle of social-environmental modification. In this film, we see bands and singers in the orbit of Sinaloa (El Komander and the BuKnas de Culicán). Their songs are a form of information operations for the Sinaloa Federation. The Movimiento Alterado (altered movement) is the business name of the narcocorrido or corridos alterados movement in Los Angeles.  The movement and songs are sanctioned by the Sinaloa Cartel.  The narcocorridos are banned in parts of Mexico so they are produced in Los Angeles, home to a large immigrant community and numerous gangs.

While LA is the home of the business, Sinaloa is its ‘spiritual’ font. In recognition of this, Quintero travels to Culiacán to earn his bones and see the roots of the Sinaloa narco-empire.  Before leaving for Sinaloa, he receives a blessing at an LA Santa Muerte temple. On the ground in Culiacán, he meets cartel functionaries who tell him the cartel dominates the territory.  He wears a medallion of Jesús Malverde (Sinaloa’s folk saint), and visits the narcotumbas (tombs) of the Jardines de Humaya. The mausoleums and tombs of the Jardines are essentially a narco-necropolis, a city of dead narcos. The opulent tombs, larger than many homes in Juárez, provide a stark contrast to the graves with wooden crosses in that town.  Yet both reinforce the impact of the culture of death and violence that challenges Mexico’s stability and soul.

Some reviewers have commented that the violence in this film is graphic (the film has been rated R for grisly graphic images of disturbing violent content, drug material, language and brief nudity). We found it rather subdued given the extent of hyperviolence and barbarization that occurs daily in the drug war. Schwarz captures the harrowing, dystopian nature of the violence without glorifying it. His most haunting image is actually the lament of a mother who lost her son—who was decapitated alive—in Juárez.

Some things are left unsaid: what is the extent of cartel control of the movimiento alterado?  Do the producers and bands pay a tax to operate?  What about the troubadours for other cartels? Does the touring circuit of the bands reflect the cartels’ turf?  These are threads for future documentaries.  For its part, “Narco Cultura” succeeds in bringing the narcocultura story to an American audience. Narcocultura is a battle for Mexico’s soul and it is being waged on both sides of the frontier.

Open Source Intelligence (OSINT) Note: We viewed the documentary in the greater Los Angeles metropolitan area in mid-December. Post viewing discussions focused on the three cities dynamic and also, possibly more significantly, on the touring circuits of the bands. With the closure of NDIC (National Drug Intelligence Center), determining Mexican cartel area of operations within the US is becoming more problematic. NDIC would, on occasion, release ‘For Public Distribution’ maps and data in order to promote public awareness concerning cartel activities in the US. Analyzing the touring circuits of the narco tribute bands (for instance, the BuKnas) may represent one way of determining which cartels may have pockets of ‘affinity’ audiences in various cities and regions of the US. Known data points—such as Sinaloa cartel activity in Chicago—can then be validated against the tour schedules vis-a-vis cartel areas of operation as a proof of concept. The merchandizing of the narcocorridos in national chains, such as Walmart, may potentially represent another opportunity to determine ‘affinity’ audience pockets in the US, if point-of-sale data can be analyzed.

Update: The Narcocultura website originally cited in this review is no longer active. For details on the film and access to the original trailer see https://streamingmoviesright.com/us/movie/narco-cultura/. SWJ-El Centro, 25 May 2020.

Khirin A. Bunker is in the political science honors program at the University of California Riverside and is a co-founder and a Director of the Political Science Society. He has interned at the Claremont Institute for the Study of Statesmanship and Political Philosophy and holds an International Baccalaureate (IB) degree. He supports SWJ-El Centro anthology book production and is presently researching refugee and depopulation of village issues related to the criminal insurgencies in Mexico.