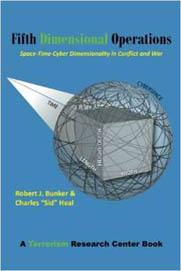 Fifth Dimensional Operations: Space-Time-Cyber Dimensionality in Conflict and War is a collection of fourteen articles from various military and police-focused journals.  This volume, edited by Robert J. Bunker, Ph.D., and Charles “Sid” Heal collates much of the extant essential materials and analysis available on cyber security and the cyber threat.  It paints a consolidated picture of the effects cyber may have, both on existing and future wars.  The influence of cyber on virtually all aspects of warfare (and domestic policing) is, and should be frightening to intelligent people when viewed in context and within a single volume.

Dr. Bunker’s innovative approach and selected content reflect deep concern with the growing threat of cyber, particularly in terms of the U.S.’s failure to think beyond the normal “four” dimensions of threats, both domestic and international.  Through the volume’s consolidation of the works of multiple authors, the perspectives and analyses of the cyber threats are wide ranging, covering various issues such as cybermaneuver through advanced battlespace (including the use of robots and remote sensors), information warfare, advanced non-lethal weapons, stealth, chaos theory applications, bond-relationship targeting (including manipulating the electromagnetic spectrum), environmental warfare, cybershielding, information-based mimicry, organic and cyber forms of camouflage, the critical electromagnetic infrastructure of the battlefield, and command and control networks.

The edited book is comprised of fourteen “sections,” which come from different journal articles dealing with some aspect of cybercrime, cyberwar, or the cyberthreat posed to modern society, published from 1996 to 2014. In addition, there is a postscript, a symbol key and glossary, and three appendices.  Although several chapters/sections of the book deal with law enforcement applications, most of the book argues that our concepts of the “battlefield” are outmoded, primarily because they only deal with four dimensions (length, width, the vertical dimension, and time, or the temporal aspect), and not with the fifth dimension, cyber.  Dr. Bunker argues that the future effectiveness of the U.S. Army is limited by its belief that the “battlespace is composed of separate, discrete physical and electromagnetic dimensions” (p. 6).   He correctly states that “terrorists, narcocartels, and forces based on clan and ethnic affiliations bring to conflict characteristics that are asymmetrical to conventional Western forms of warfare” (p. 7).  For Bunker, battlefield dominance in a future war will depend on “total cyberspace dominance—not just digital battlespace dominance” (p. 10).

Bunker and the other article authors make the persuasive argument that land warfare was defined first by human energy (infantry) and then by animal energy (cavalry) in a three-dimensional medieval era, and then by mechanical energy in the four-dimensional modern era.   Dr. Bunker also makes the assertion that “battlespace is historically defined by three spatial dimensions {x, y, and z} and one temporal dimension {t}, just as it is implicitly assumed by the thinkers that our most dangerous future opponents will be peer-competitor nation states rather than emergent warmaking [sic] entities which defy our perceptions of crime and war” (p. 63).  The book argues that what is missing is the fifth dimension, cyberspace, which Bunker and the other authors define as both the “impact of the Internet and a stealth-masked terrorist on the advanced battlefield” (p. 64).

One of the continuing themes throughout the book is that terrorists hide in a “virtual” domain that cannot be reached using “organic camouflage, sympathetic social spaces, or aspects of cyberspace to mask their activities” (p. 116).  A key long-term problem our military forces have had to face in the Middle East, in both Iraq and Afghanistan, has been the propensity for opposing forces to blend into the community at large after engaging traditional military forces affording them camouflage, since today’s asymmetrical warrior looks much like the civilians they terrorize.  Cyberspace is the online corollary to this form of camouflage, since it affords anonymity to groups with the technological expertise to use it such as Al-Qaeda. Bunker summarizes the cyber dimension of the battle space as “the infosphere, organic and cyber forms of camouflage, the cyber element of deployed forces, critical electromagnetic infrastructure in the battlespace, and C2 [Command and Control] networks” (p. 117).  Dominance in this form of the battlespace will require, according to co-editor Sid Heal, “recognizing that cyberspace is an inherent component of battlespace,” as well as sensors to “identify and locate criminals and terrorists hiding outside human sensing capabilities,” including devices to detect explosives on the tactical level, and biometric devices to identify terrorists and criminals on the strategic level (p. 102).  Heal recognizes that this type of future warfare will effectively require a quantum leap in the way we manage the command and control function in tactical situations.  Currently, expertise and authority is placed at a central location, usually referred to as the command post.  This results, as Heal notes, in the unfortunate situation of having expertise and authority at one location (headquarters or regional commands), and the greater situational awareness at another (the crime scene).  He correctly argues that the more complex the tactical situation (particularly those involving nuclear, biological, and/or chemical threats), the greater the need for the expertise of those not usually associated with tactical situations, including professors, scientists, and engineers located at distant facilities.  These problems can be overcome with the creation of a “cyber command post” where, through the use of cellular, video, and VOIP technology, the geographically distant Subject Matter Experts (SMEs) bring to bear on the tactical situation their unique expertise.

This application of cyberspace to command and control in tactical situations related to either the military or police fits in well with the book’s definition of cyberspace as “the totality of the communication and interaction between fielded forces. Thus, a cyber attack means an attack that manipulates the ‘data’ that is exchanged in the process of communication” (p. 115). And, the more data disrupted or destroyed, the more effective the attack.

Fifth Dimensional Operations: Space-Time-Cyber Dimensionality in Conflict and War offers in a concise volume the various arguments about the impact cyber technology is having on how the military and law enforcement deal with a rapidly changing environment.  This work would be valuable as a reference for educators and as a reader to supplement other texts used by military, homeland security, and criminal justice educators in graduate courses dealing with the constantly changing impact the cyber environment has on law, culture, conflict, and society.

Jeff D. Dailey is an Assistant Professor of Border Security and Intelligence, Department of Security Studies, Angelo State University. For twelve years he performed classified computer-aided signal analysis (SIGINT) with active duty Army and Air Force intelligence units in several locations, in both the U.S. (NSA) and in Europe.  He was assigned a Top Secret Clearance, under a Department of Defense section billet.  In 1994 he received a Master’s Degree in Criminal Justice, at Eastern Kentucky University.  In 2002 he obtained a Ph.D. in Criminal Justice at Sam Houston State, in Huntsville.  He has taught Criminal Justice at several schools and co-authored books on Probation, Border Security, and Sexual Abuse of Inmates.