Expeditionary economics is an important line of effort in all five kinds of irregular warfare.  RAND argues, for example, that the Commander’s Emergency Response Program (CERP) model could play a major role in future foreign internal defense, counterinsurgency and stability operations, as well as serve as an enabler for counter-terrorism actions that are nested with stability ops.  Post and Peterson go further, proposing an applied framework for understanding and planning for the economic terrain in unconventional warfare.

Although designed for military effect, expeditionary economics nests easily within the larger economic development objectives pursued by civilian organizations.  Understanding this context can improve planning and execution of economic activities in support of irregular warfare campaigns and help de-conflict DOD military mandates from those of civilian organizations working in the same space.

The U.S. military pursues expeditionary economics at all levels of engagement, from the tactical to the strategic (Table 1).  Even tactical programs like CERP, which funded some 18,000 projects in Afghanistan and 36,000 in Iraq, had operational and strategic effects.  In Afghanistan RAND found that practitioners overwhelmingly supported CERP for its impact on field operations, where it helped achieve local governance, economic and security objectives—the three pre-requisites for area stability.  The findings were supported by quantitative analysis.  Larger CERP projects were associated with significant increases in agricultural production, for example, with the impact on markets especially pronounced.

Far too often, however, the success of expeditionary projects has been measured by the metric of reduced local violence instead of their contribution to economic development.  This has led to a ‘small is good, big is bad’ narrative, which now drives part of the broader policy debate about the future of stability operations.  Sadly, this narrative ignores the transformational impact of big projects and reflects a callow understanding of how national economies evolve in the real world.  It also overlooks how expeditionary economics fits into the broader context of country economic development.

The economic development of nations generally includes two broad lines of effort—promoting economic growth, and building economic infrastructure (Table 1).  Economic growth refers to the level of goods and services that a country produces over time, and promoting it generally occurs at three levels of engagement (Table 1).  In many countries, including those at both peace and war, they are pursued by multiple U.S. and foreign organizations simultaneously.

At the Structural/Strategic level, these organizations (Table 2) focus on ‘economic governance’—the legal, regulatory and judicial institutions that support and control a country’s economic activity.  This ranges from work on macroeconomic and fiscal policy, to international trade regimes, commercial law, and protection of private property rights.  While a number of U.S., bilateral and multilateral organizations work on economic governance, this is the one area of economic development that has historically fallen outside of the U.S. military lane.

At the Sectoral/Operational level, organizations focus on making the goods and services of countries more competitive in the international marketplace, and on attracting foreign direct investment (FDI).  This work ranges from developing sectors like mining, manufacturing or software, to promoting specific transnational business deals.

A number of civilian organizations work in this area (Table 2).  So did DOD from 2006-2014 in Iraq and Afghanistan, through its Task Force for Business and Stability Operations (TFBSO).  For reasons discussed below, however, the limited ability of civilian organizations to promote FDI in countries at war, and the current absence of any capacity at all on the military side to meet this critical expeditionary need, is perhaps the biggest weakness in U.S. stabilization capabilities.

Economic infrastructure includes the road, rail, aviation, power, water, sanitation, communications, border and other physical infrastructure required to enable economic growth.  Good infrastructure is an essential prerequisite for economic growth, and building and maintaining it is by far the most expensive element of a country’s economic development.  Its importance is reflected by demand.  Ask the leaders of almost any third-world country what their development priorities are, and the answer is almost always the same: roads, power and water.  The order varies, but the priorities generally do not.

In expeditionary economics, it is particularly important to understand the emerging role of foreign direct investment (FDI) in economic development and country stabilization.  For forty years, since the end of World War II, foreign aid largely drove development in most third world countries.  That started changing in the late 1980s, with dramatically increased foreign investment and mobilization of domestic financial resources.  FDI has now become the largest source of external financing in many low- and middle-income countries, surpassing foreign aid.

Today the massive increase in FDI is seen almost everywhere.  While the highest FDI inflows go to high income countries, private financing to low income countries is up eight-fold since the 1990s.  Even in the least developed and most unstable region, sub-Saharan Africa, FDI by 2014 was almost twice that of foreign aid.

The implications of this for the stability mission are profound.  While foreign aid will continue to play an important role in conflict countries like Afghanistan over the near term, it is FDI that will ultimately bring economic stability there.  It’s no coincidence that the three prerequisites for country stability—good security, acceptable governance and sound economic fundamentals—are also among the four most important requirements for attracting foreign investment.

Unfortunately, attracting investment to countries at war is the biggest weakness in the U.S. economics arsenal.  Civilian organizations like USAID, which has a good record attracting investment to countries at peace, are far more limited in their ability to do this kind of work effectively in conflict environments.  And, since the demise of TFBSO, DOD doesn’t do investment promotion at all.  Filling this gap is arguably the most compelling need on the critical path to success for U.S. stability missions.

The U.S. military has a long history with expeditionary economics (Table 3).  Recent examples include Seabee suspension bridges at the tactical level, energy sector investment promotion by TFBSO at the operational level, and USACE construction of high voltage transmission lines at the strategic level.  While planned for military effect, each is an integral part of a much broader coalition effort to develop the host country economy.

Expeditionary economics will continue to play a major role in future irregular warfare campaigns, especially foreign internal defense, counterinsurgency, stability operations and unconventional warfare.  Understanding the broader context within which these actions operate can both improve their planning and execution and help de-conflict DOD military mandates from those of civilian organizations working in the same space. 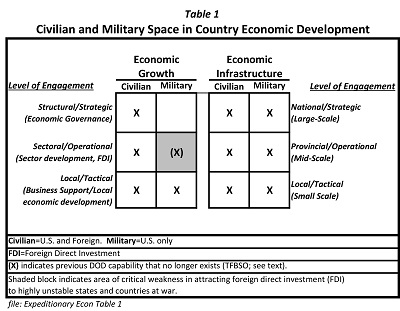 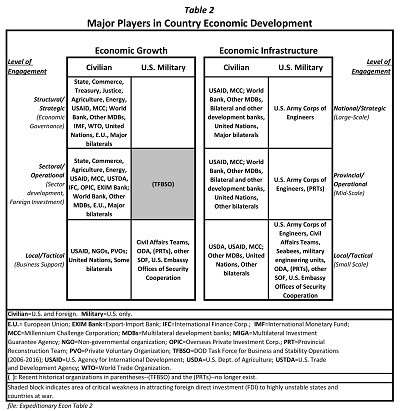 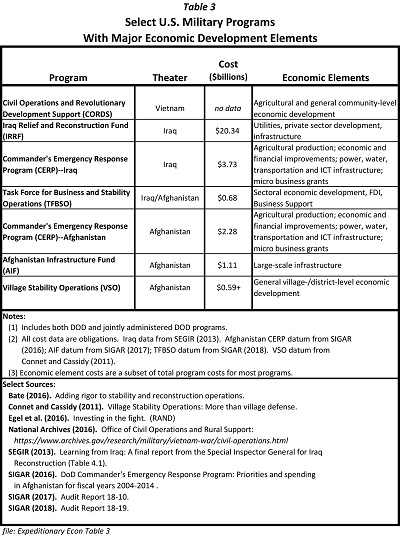 Jeff Goodson is a retired U.S. Foreign Service Officer.  In twenty-nine years with the U.S. Agency for International Development, he worked on the ground in 49 countries in Africa, Asia, Latin America, Eastern Europe and the Middle East.  He was Chief of Staff at USAID/Afghanistan from 2006-2007, and Director of Development at ISAF HQ in Kabul from 2010-2012 under General David Petraeus and General John Allen.  The opinions expressed are his alone.