Even Amorphous Systems Have Centers of Gravity

Even Amorphous Systems Have Centers of Gravity

Can an amorphous system characterized by low hierarchy, dispersal, and decentralization have a Center of Gravity (CoG)?  I say, “Yes,” because the purpose of the system determines the CoG, not the structure.  However, to many theorists the answer is a resounding no, because the system’s structure is the determinate.  They claim a system must be concentrated and centralized to have a targetable CoG.  Both answers have compelling arguments.  Which is correct depends on one’s conceptual foundation of the CoG concept.

To the subscribers of Clausewitz’s metaphors, networked systems lack concentration and mass.  Obviously the traditional concept does not work well with these amorphous systems.  However, those who subscribe to systems theory and an objective based CoG concept can easily say, “Yes.”  The answer depends on how you understand and define the CoG.

This article will show how the application of a systems/objective based concept and definition successfully countered a low hierarchical, highly dispersed, and decentralized system that was responsible for millions of deaths.

Lawrence Freedman, makes the ‘no’ argument in his 2014 ‘War on the Rocks’ article Stop Looking for the Center of Gravity.  He says,

“In physics, the COG represents the point at which the forces of gravity could be said to converge within an object, where its weight was balanced in all directions. If struck there it would lose balance and fall. One obvious problem was that whereas it might be easy to identify the COG of a solid and static object, it was much harder to do so with a complicated shape made up of moving parts.”[i]

Many posit that useful or targetable CoGs do not exist because modern warfare is increasingly characterized by clashes of resilient, dispersed, and decentralized networked systems, loosely guided by intent.  The often cited examples are insurgencies and terrorist networks that do not form a cohesive and defined mass.  These loosely connected and dispersed systems do not concentrate and present targetable centers of gravity.

“Freedman rightly points out several nagging concerns that make the idea of center of gravity problematic. Central to this is the challenge of identifying a COG that is at once precise enough at the tactical level to be engaged, yet also comprehensive enough to influence the system as a whole and induce a consequential strategic effect. Additionally, the resilience of groups and states in an increasingly connected, wealthy and adaptable global economic system and new domains, such as cyber and space conspire to further complicate our ability to calculate and strike actual, relevant adversary COGs.”[ii]

They go on to say, “A center of gravity analysis only has value if it can identify an object upon which force can be applied and which will affect the larger system as a whole.”[iii]

The crux of their argument is that Clausewitz’s metaphors of “a dual”, “wrestlers”, and “the hub of power,”[iv] suggest a level of unity and cohesion that does not exist in the modern world. Dr. Antulio Echevarria II, recognized this in his article, ‘Center of Gravity Recommendations for Joint Doctrine’.[v]  He argues for cohesion, connectedness and “focal points where forces come together”.[vi]  He goes on to claim that the CoG concept is only useful when, “…the enemy structure or system is sufficiently connected to be treated as a single body.”[vii]  He concludes by saying, “At a time when an enemy can operate in a decentralized manner globally, certain situations may arise in which the idea [CoG] does not apply and pursuing it will not benefit warfighters.”[viii]

The strength of these ‘No’ arguments are entirely based on an adherence to a Clausewitzian metaphorical foundation.  These arguments essentially claim Clausewitz’s analogies, and the CoG, are no longer relevant because they no longer reflect the complexities of the modern environment.  What if we based the CoG concept on something other than Clausewitz’s metaphors?  Could the concept work in the modern environment?

Proponents of the ‘yes’ argument freed themselves from Clausewitzian metaphors and proposed a CoG concept, built on systems thinking and an ‘objective’ based definition that works with modern dispersed networked systems.

Systems thinking is a perspective that views any entity or environment as a functionally related group systems that form the complex whole.  For example, a human body is a complex whole with respiratory, digestive, and circulatory systems.

An ‘objective’ based CoG definition shifts the focus from the metaphorical source or hub of power, to what accomplishes the system’s intended goal or objective.  An objective based definition is, “the CoG is the primary entity that inherently possesses the critical capabilities to achieve the objective.” Since all systems have a purpose or goal, this definition would apply regardless of structure or the level of centralization.

The following is an actual example how the systems/objective CoG was used against a decentralized system.  The actual system will be identified latter, but here are its main characteristics:

In this system the Primary Community ‘A’, is a population of likeminded individuals with a shared goal.  They operate independently and only follow simple rules.  Globally they are responsible for the deaths of millions.  Their goal is to expand by converting as many neutrals to supporters as possible.  To do so they require access to Community ‘B’.  However, they do not have direct access to ‘B’ due to physical protective barriers of ‘B’ and their own limitations.  Therefore they infiltrate into ‘B’ through Community ‘C’, which has to access ‘B’.

The purpose of ‘C’s contact with ‘B’ is to obtain required vital resources which ‘B’ provides under duress.  ‘A’ gains access to ‘B’ through the contact with ‘C’ and as a byproduct of that contact, ‘A’ can change neutrals in both ‘B’ and ‘C’ to supporters.  Any contact between a neutral and a supporter in either ‘B’ or ‘C’ can change the neutral to a supporter. 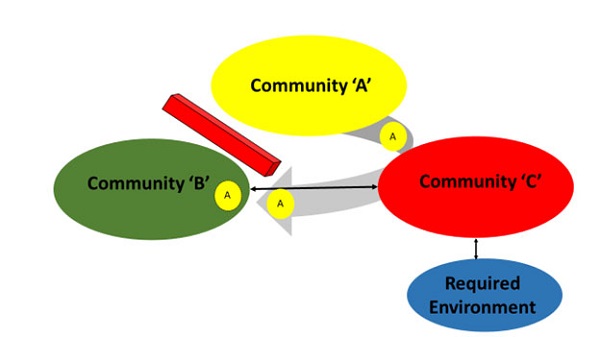 Is there a ‘source of power or a hub of power in this system?’  Not really.  So the traditional Clausewitzian, CoG definition does not apply.  Therefore one can argue creditably that CoGs do not exist in this low hierarchical, dispersed and decentralized system.   However, using the system/objective foundation, we can apply the CoG concept to this system as follows:

The Highly Dispersed, and Decentralized System

The ‘Primary Community ‘A’ is the Yellow Fever Virus whose goal is to reproduce and expand.  To do so it requires ‘B’, a human or primate host’s, blood system.  However, the virus ‘A’ does not have the capability to directly access the blood itself.  It needs something to transport itself and inject itself into the host’s blood.  The ‘transporter and injector’ is the Ades Aegypti mosquito, ‘C’. So the mosquito is the Yellow Fever Virus’s ‘doer’ - the Center of Gravity.

The mosquito, an innumerable dispersed CoG, has critical requirements (CR), blood for its meals and the ability to pierce the host’s skin are two of the main ones.  Other CRs include the right weather conditions, a mate and access to calm standing water for its offspring to grow. Unfortunately for ‘A’ and the CoG, ‘C’ these CRs are also vulnerable to adverse actions by man, ‘B’ and nature. Thus despite being dispersed and decentralized we can identify critical requirements, “…upon which force can be applied and which will affect the larger system as a whole.”[xi]

Dr. Carlos Finlay, a Cuban Doctor probably never read Clausewitz.  However he understood biological systems, their connections to the environment and what today we call the critical factors of: critical capabilities, critical requirements, and critical vulnerabilities.  Using a systems approach he figured out the mosquito was the Virus’ CoG and helped map out the system.  Major Walter Reed MD confirmed Finlay’s theory as fact.  Major General William Gorgas MD developed ways to attack the mosquito’s critical requirements by draining swamps, fumigation, mosquito netting, and improving public water systems; thus making the environment safe for the construction of the Panama Canal.

As Becker and Zwolensky said, “A center of gravity analysis only has value if it can identify an object upon which force can be applied and which will affect the larger system as a whole.”[xii]  Doctors Finlay, Reed and Gorgas met this test.  Despite the Yellow Fever system’s amorphous structure, they identified the object and applied force which had a significant effect on the larger system.  They applied systems thinking, and while not using the term or understanding the concept, identified a CoG, its capabilities, requirements and vulnerabilities.  They then pioneered an indirect approach to attacking the vulnerabilities of a dispersed, decentralized, and innumerable CoG.  Their successful efforts have saved millions of lives and made large tracts of the globe habitable.

Given the acknowledged limitations of the Clausewitzian based CoG in the current environment, is it not time to look for a new foundation?  A foundation that applies equally well to centralized and decentralized systems.  As demonstrated by the pioneering doctors in the war against Yellow Fever, the systems/objective based CoG is a strong candidate.

Colonel Dale C. Eikmeier retired from the Army after 30 years of service as an air defense artilleryman, joint planner, and strategist. Assignments include duty in Europe, Asia, the Pacific, and the Middle East. Campaigns include Operations Desert Shield, Desert Storm, Enduring Freedom and Iraqi Freedom. He has taught at the School of Advanced Military Studies, the US Army War College, and the Army Command and General Staff College. He holds a Masters in Military Arts and Sciences, a Masters in Management and a Bachelor of Arts in Political Science.