“The end may justify the means as long as there is something that justifies the end.”

The 2018 National Defense Strategy identifies a number of technological advancements and the changing face of war and conflict. Specifically, there is a relentless drive to develop new and disruptive technologies, which have the potential to expand known and unknown actors outside of the “human space,” which is the traditional four-dimensional battlespace (Adams, 2001). The new and emerging technologies include advanced computing, “Big Data” analytics, Artificial Intelligence (AI), autonomy, robotics, directed energy, hypersonics, and biotechnology (Trump, 2018). These are the same technologies that will enable the United States to meet and defeat our current and future adversaries. The focus of this paper is to demonstrate military applications of AI and machine learning as an emerging capability with an emphasis on AI being used to enhance surveillance, planning, logistical support, decision making, and warfighting (David and Nielsen, 2016).

At its core, AI consists of a computer program that is capable of executing decisions in a faster, more intelligent manner than a human based on a defined set of parameters and a clear objective. AI, coupled with robotics, Unmanned Aerial Systems (UAS), and machine learning has the potential to radically alter who has an advantage on the battlefield. Deep machine learning “focuses on computational models for information representation that exhibit similar characteristics to that of the neocortex (Arel et al., 2010, p. 13).” In order to provide an illustrative example, the Pentagon’s Maven Project uses machine learning to quickly and efficiently scan drone video footage in order to identify potential targets: personnel, vehicles, and buildings (Shane et al., 2018). Project Maven focuses on computer vision, which combines both machine learning and deep learning, in order to autonomously collect items of interest for further analysis. In 2014, 2.5 quintillion bytes of data was created each day, and Facebook users alone uploaded in excess over 350 million images a day (Dunlap and Dunlap, 2014). Figure 1 illustrates the growing digital universe, which can be used for both good and nefarious purposes. As such, the fuel for AI is data, which is on an exponential growth path. 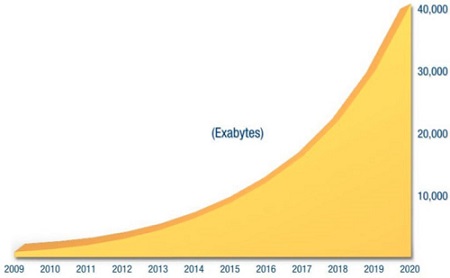 First, we will discuss AI’s influence on the military’s ability to conduct surveillance. AI systems, supported by deep machine learning, will have the means to interpret and conduct initial data analysis collected through the digital breadcrumbs left by surveillance cameras, phone lines, emails, social media clusters, and numerous other sources (Russell et al., 2015; Singer and Friedman, 2014). Through advanced algorithms and programs such as the Maven Project, AI coupled with machine learning will have the ability to provide positive identification on potential targets, collect and perform pattern of life analysis, and interpret vast amounts of data on a continuous basis. However, this will not be without challenges. The military’s ability to take advantage of the synergy between “Big Data” and AI will be impacted by privacy concerns both at home and abroad (Manyika et al., 2011; Agrawal and Srikant, 2000). Even when AI is used to support military operations, the legitimacy of AI and autonomous systems is being heavily debated in the international community. Next, we will discuss AI’s influence on planning and logistical support during the conduct of military operations.

Military planning is become increasingly complex with the inclusion of advanced technologies, unmanned and autonomous systems, the cyber domain, new, emerging, and unknown threats, and the mercurial nature of the battlefield. AI and machine learning can help streamline military planning along several dimensions. From a logistical perspective, AI can solve complex allocation problems in the planning phase of an operation. The allocation plan can then be executed during the mission when critical logistical requirements are needed. Additionally, AI and machine learning can optimize Automatic Target Recognition (ATR) problems using UASs where the optimal number of drones, payloads, along with path planning can be prescribed using multi-objective evolutionary algorithms (Wei et al., 2013). Problems that use multi-objective evolutionary algorithms do not have a single solution where all objectives can be optimized. The goal is to prescribe a solution that lies on or near the optimal front based on the identified objectives (Deb et al., 2000). This same path planning example can be applied to vehicle routing and task allocation problems through the use of AI and machine learning, which will be further evaluated by military planners prior to execution. Military personnel and AI must operate in a collaborative environment in order to fully realize the benefits during operational planning. Beyond military planning, AI can also be used to facilitate and execute decisions during an operation.

One use of AI in decision making centers on operating military equipment, including vehicles, aircraft, and missile defense systems. For example, automated vehicle technologies utilize AI to make rapid decisions in order to aid human drivers while operating a motor vehicle (Goodall, 2014). Automating certain aspects of vehicle and aircraft control provide high-level capabilities that can enhance security, safety, and speed up critical decision making. The vehicles used by the Defense Advanced Research Projects Agency’s (DARPA) Urban Challenge and current self-driving cars and aircraft are prime examples of automated systems, which have the ability to make decisions in order to avoid an eminent crash, improve operating efficiency, and communicate traffic patterns to other users (Goodall, 2014). AI on the battlefield can be used in a similar manner. Advanced algorithms can identify a problem before it occurs, including the loss of Global Positioning System (GPS) capabilities during a UAS mission, requiring the aircraft to return to its home base or recognizing critical fuel shortages during a close air support mission, automatically coordinating for an aerial resupply. An additional use of AI to enhance decision making includes tracking and engaging missiles from North Korea or other adversaries before a strike occurs. Countless other examples can be gleaned in the use of AI to automate time sensitive decisions in a military context. The last topic will examine AI to facilitate warfighting functions.

The first example of AI serving a warfighting function is with DARPA’s submarine-locating drones. Although these underwater drones are not considered autonomous weapons at this point, they certainly have the potential to become so (Geist, 2016). Relatively inexpensive, “AI-controlled undersea drones” will increasingly make the ocean transparent, which will undoubtedly have rippling second and third-order effects on the international order (Geist, 2016). Another example of using AI to enhance warfighting functions centers on the cyber domain. The weaponization of AI is unlike anything our military has faced before. In past wars and conflicts, weapons factories produced munitions, hardware, and tangible equipment. Future weapons factories will develop software that have the means to launch crippling digital and cyber-attacks in this expanding battlefield (Johnson et al., 2017). A third example centers on swarms of drones with facial recognition software where once positive identification is achieved, a kinetic strike can be executed (Dunlap and Dunlap, 2014). Although the U.S. would not execute a kinetic strike in this manner, our adversaries will. As one can imagine, there are unlimited examples of how AI can be realized as a warfighting function.

The weaponization and future military applications of AI to enhance surveillance, planning, logistical support, decision making, and warfighting is inescapable and must be capitalized on. As such, these new software-based factories that produce AI algorithms will present the international community with numerous ethical, legislative, and security challenges, leading to an AI arms race. The AI arms race must be realized and managed (Geist, 2016; Johnson et al., 2017). This paper provides a glimpse into how AI is revolutionizing the battlefield and the emerging capabilities are real.

Singer, P. W. and Friedman, A. (2014). Cybersecurity: What Everyone Needs to Know. Oxford University

Lieutenant Colonel Joshua Eaton is a career Special Forces officer who has served in a variety of assignments and conducted multiple combat deployments to Iraq and Afghanistan. He has graduated from several military courses and has earned several military awards and decorations including a Bronze Star for Valor and Purple Heart. Prior to beginning his PhD in Decision Sciences and Engineering Systems at Rensselaer Polytechnic Institute, Josh commanded the Special Forces Underwater Operations Dive School in Key West, FL. Josh has taught a number of courses, including System Dynamics Simulation, Analytical Methods for Engineering Management, Systems Engineering, Logistics and Supply Chain Management, Database Systems, Negotiating Strategies, and Project Management. He has a BS in International Relations and Systems Engineering from the United States Military Academy and a MS in Engineering and Management from MIT.