This essay is an excerpt from a longer field investigation conducted by Falko Ernst in Michoacán in 2015. The author met with this sicario four times to interview him about his life story. The full story was originally published as The Life and Death of a Mexican Hitman on 17 October 2018 by the International Crisis Group. 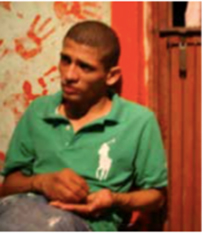 Grillo rolls himself a joint in front of a house in the barrio.

I meet Grillo in the twilight of his career. Because of what he’s done, his life is hanging by a thread.

Everybody knows. But he does, too.

The scars across his back say so, medium-rare lines, two dozen of them visible still. The electric cable cut through his skin, into his flesh. Right into La Santa Muerte. They were pounding on him for hours and burning holes into him with cigarettes.

Su Santita can still protect him. But only so much, and only for a while longer.

A Name and a Face

Before he goes to the park to carry out the hit, Grillo is given a name and handed a photo showing a face, as usual. Then he spends the night in a safe house, a non-descript shanty on the outskirts of town, one in a warren of grey brick dwellings, unpainted and unfinished. Here, in the domain of the economically crushed, he’s right at home.

Inside, there’s just a bare, stained mattress with no sheets. The next day, he putters around until early evening, staring at the no-paint, no-plaster walls, wasting time on Facebook, uploading a post honouring his santita, his little saint, a death dispenser’s spiritual partner of choice. La Santa Muerte. The Holy Death.

Then he’s walking to the park, with a .38 tucked in the back of his pants. He’s going to use it on the guy in the photo. He doesn’t know who the marked man is, and he doesn’t care. The guy will have done something to cross the capos. Probably, it’s an unpaid debt or a refusal to submit to an extortionate demand that was first masked as a polite request.

His killing in the park accomplished, Grillo says, he crosses a nearby avenue, busy at this time of day. He follows the traffic for a bit, but he is still in sight of the murder scene when he pulls up a plastic stool at a taco stand. A single bulb dangling from a bare wire attached to the metal frame, its light reflecting off the plastic tarp, bathes the space in a shady reddishness. The taquero, the taco maker, wears an expression as serious as a spinal surgeon’s as he pulls at the mass of intestines bubbling away in a deep metal bowl of fat. He chops them up with an instrument more machete than kitchen knife.

Grillo orders cinco de tripa, five tripe tacos. He orders them with todo, so the vendor throws the cilantro-onion mixture on top. Grillo finishes the assembly off with spoonfuls of red-hot chili sauce, then squirts of lime. 150m or so away, the night air fills with the sirens of patrol cars and ambulances, their lights oscillating, red and blue.

Grillo stuffs his face, pays up and, as good manners dictate, wishes provecho, or bon appetit, to the other patrons. They are observing the ruckus down the road, unaware that it’s because of him.

He walks over to a nearby 7-11 for dessert, a strawberry-flavoured yoghurt drink.

It’s the end of his shift.

A Templar shows off his cuerno de chivo, his AK47. Masks like his are also part of a cartel foot soldier’s basic gear. They are meant to provide anonymity, and to look frightening, evoking death.

Cleaning up Society, One Murder at a Time

Grillo works the kill list one by one. As the latest iteration of Mexico’s drug war worsens, the bosses up on the cerro keep updating the list. It’s just the bad guys, they say, necessary sacrifices to the gods of order and social peace. But then again, it’s also those who haven’t paid up. Examples have to be made. And then they add more names, more and more, for this or that transgression or perceived instance of disrespect. It can be as little as a word out of context, or out of order, that reaches the wrong ears.

Or if you don’t make your way up the hill when they send for you. Cuando te mandan llamar, vas o vas. When you’re called on to come, you can either go, or you can go. It’s common knowledge.

Way back when, a younger Grillo got in trouble before he’d escaped across the line to El Norte, the U.S. But the gringos didn’t appreciate someone running with gangs and sent him back.

He picks up the story again: he’s still a fresh-faced nineteen-year-old when the Family snatches him up. They know of his earlier days of knife-wielding robberies, and give him a choice: run with us or become the next item on our list.

The Cricket starts out with the Family when business is booming.

The Family is riding high on its values, and everybody has to know about it. The bodies are billboards for the Family’s claim to absolute power.

It works. The message spreads. People are scared witless, locally, nationally and abroad. Academics tell their students they’ll would get killed if they so much as set foot in Tierra Caliente. The international media are fascinated: a narco-sect going at it like Charles Manson. It’s how the Family establishes a brand name, unlike anything Mexican narco-surrealism has churned out before or since.

But in Apatzingán, in Michoacán, there are sighs of relief, too. Finally, ordinary folks can leave their doors open again. The Family isn’t stupid. Neither is Grillo. He joins them, and he makes a living killing in the name of Family values.

He believes in them, too, maybe for lack of an actual family of his own. Somewhere in the city, there’s a grandmother barely able to stand the sight of him. She knows well enough the depths he’s sunk to.

There’s an aunt somewhere, too, but she’s killed in front of her place. Two shots, point blank – his style, pretty much. She hasn’t paid up, either. In the faceless cases, death provokes from Grillo nothing more than a shrug. But this time, he rushes to the scene to find the body still lying there.

And so, the Family becomes family, for a while at least, a substitute for belonging. It’s enough belonging for him to get the numerical code signifying La Familia Michoacán tattooed on his right forearm.

They see something in him, Grillo says proudly. He isn’t just a regular assassin, but one who will rise through the ranks to become middle management, with luck even a patrón. They get to him with the promise of power, glory and the good life.

The reality is otherwise, he continues. He and the other muchachos sleep among the rocks. It rains until their bones are wet, the scorpions come out and they all come down with Chinkungunya or Zika or whatever’s current, virologically, in Tierra Caliente. And they get paid, as rookies, 350 bucks a month. They can’t even spend it on booze and female company, since the commanders don’t respect weekends, when they could show off what little they’ve made.

In fact, it’s a minor miracle that these muchachos, these wafer-thin boys who look like silhouettes in their skinny jeans, can make war with heavy made-in-Yugoslavia Kalashnikovs rather than, say, simply collapse and call it a day.

But Grillo hasn’t realised any of that yet. He excels.

“El Dragón told the boss: ‘most of them aren’t any good. It’s clear that the only chingón is Grillo”. The only real badass.

The Dragon isn’t just anybody. He’s a former elite soldier, brought up from Guatemala, where he and his brothers-in-arms, the bastard kids of U.S. counter-insurgency operations, slaughtered indigenous villagers and anyone else thought to be susceptible to communism.

Then came peace accords, demobilisation and unemployment. The Dragon has skills not being put to use. It’s a shameful inefficiency. The market doesn’t let them go to waste. The Family sends envoys south, bringing back whomever they can find, free agents, hunters, jungle trackers, mountain stalkers, village burners or throat slashers.

The Family brings them to do their thing in Michoacán—but mostly to teach Grillo and the others to be a bit like them.

The Dragon becomes Grillo’s father in this new Family of his. “He had faith in me”. He teaches The Cricket a caminar, how to walk, and the right way to use those juguetes, those special toys. “He pulled me in. He taught me strategic movements, close combat. I became professional with weapons. They trained me as a sniper, in handling grenades, explosives”.

He makes it to be a full-bore pistolero, a gunman, at just nineteen. “I loved it, getting to know it all, how we were advancing. And the way we had so much influence in the barrios”. He moves up in the organisation to lead cells of fifteen fighters in confrontations with rival criminals and state forces. An elite sicario in the making, he gets to guard high-level Family capos and to work on the kill list for extra pay.

Death is in demand. Life is golden, until it isn’t.

Dr. Falko Ernst is a Mexico City-based investigator and author. Senior Analyst Mexico for the International Crisis Group, he has conducted close-up research on organized crime, criminal governance, and political collusion since 2010. While completing a PhD in Sociology at the University of Essex, he lived in communities controlled by the Knights Templar organization in Tierra Caliente, Michoacán. Twitter and Instagram: @falko_ernst.