An honest assessment of our Army’s efforts to update its doctrine over the last several years would have to result in mixed results at best.  After September 11, 2001, Army doctrine radically started to change in an attempt to better support the force generation requirements of two simultaneous theaters of war.  Then, the Doctrine 2015 initiative revolutionized Army Doctrine: stripping it bare, reducing it to fundamental first principles, and beginning the process of rebuilding it from the ground floor up.

Reflecting back to our older doctrine, one gets the impression that these manuals represented the accumulated, hard-learned wisdom of several generations of military officers.  The thread of organic development could easily be traced back to the Second World War, and in some cases even further back.  With Doctrine 2015, we tore apart that heritage and reduced it down to first principles.  Then, we began the process of rebuilding in a short handful of years what took generations to organically assemble.

The fundamental problem at the heart of the Doctrine 2015 effort was this attempt to rebuild within a few years what had previously taken generations to assemble.  With the older, organically developed doctrine, one could see a progression from first principle A, after being reflected upon, leading to B, which in turn was reflected upon, and lead to C, and so forth.  One could trace an A to Z in this organically developed doctrine.  With Doctrine 2015, however, we have the clearly defined first principle A, but have enormous problem defining B to Z.  In fact, Z sometimes seems absurd without the context of the organic development from A to Y.  In isolation, Z can lack sufficient justification.

What we are left with currently is a modern doctrine that adequately explains “what” to do, but goes out of its way to avoid recommending “how” to do it.  An easy to understand example is Figure 1, which is a table taken from an old copy of FM 101-5 from 1997.  This table gives a basic rule of thumb type approach to assigning duties and responsibilities during the military decision-making process.  This type of rule of thumb advice is rarely presented in current doctrine.  It may be out there in other Army training publications, but it is not easily accessible and absent from doctrine. 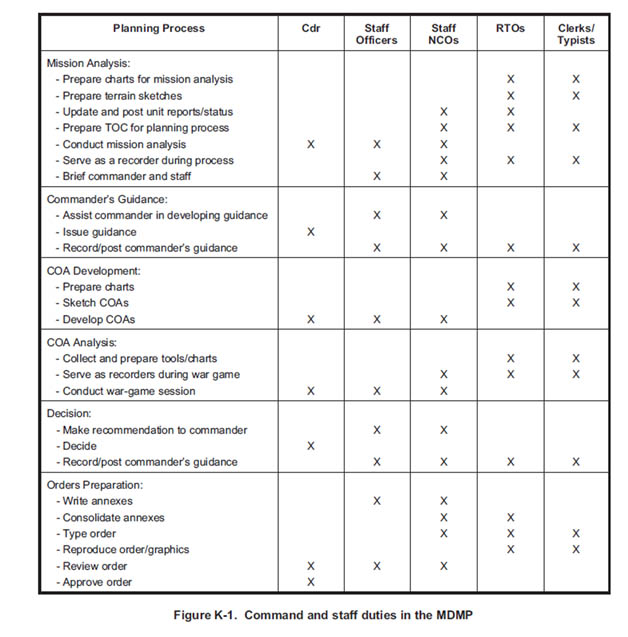 Another major flaw running through almost all our current doctrine is a failure to speak “at echelon.”  Doctrine has become so focused on being universally applicable that various important concepts are left with no clarification regarding echelon.  Be it overall battlefield framework, fires, sustainment, airspace management, and a plethora of topics in between, doctrine tends to address universal themes and principles over actual execution at echelon.

Defenders of Doctrine 2015’s approach can counter any argument against it.  For instance, the argument that Doctrine 2015 is too silent on application at echelon can be countered by stating that application at echelon too narrowly defines doctrine.  For example, if doctrine were to state that corps deep operations generally run X to Y miles in front of the forward line of troops and P to Q hours ahead of current operations, one could argue that we’ve too arbitrarily committed corps deep operations to a particular window of time and space.  The better approach, according to Doctrine 2015, would be to explain what deep operations are and allow planners, after conducting thorough mission analysis, to determine when and where deep operations should occur given the particular mission variables of that operation.

All of the justifications for Doctrine 2015 work well on a theoretical basis.  In practice, however, many commanders and staffs are left being aware of what needs to happen, but “building the aircraft in flight” when it comes to knowing how to make it all happen.

The above was all by means of introduction to address the impending publication of FM 7-0.  FM 7-0 will replace the non-doctrinal Leaders Guide to Unit Training Management, published in December 2014 by the Combined Arms Center-Training at Fort Leavenworth, KS, and will become the Army’s central doctrinal publication for the execution of training management.

The predecessor to the FM 7-0 series were FM 25-100 and FM 25-101, last published in the late 1980s and early 1990s.  FM 25-100, Train the Force, was focused on overall Army training with a heavy emphasis on the roles of senior and installation commanders.  FM 25-101, Battle Focused Training, was focused on battalion and below leaders and organizations.  (One can see right from the start that the previous, now rescinded, doctrine was designed specifically to facilitate understanding at echelon.)

FM 25-100 and FM 25-101 presented a comprehensive methodology for planning, preparing, executing and assessing Army training.  This training doctrine divided up planning horizons into three frameworks: long term, short term, and near term.  It established specific cycles of meetings and briefings, at echelon, which were to occur in regular and universal intervals.  It provided very clear guidance on roles and responsibilities, also at echelon.  (Two notes on responsibilities.  FM 25-100 designates very specific and discreet duties for the command sergeants major involving managing the training of individual soldier tasks.  And, FM 25-101 starts off on page 1, sentence 1 assigning responsibility for unit training with the unit commander.  The FM 7-0 series all take several pages or more before the unit commander is even mentioned.)

The current 7-0 series of training doctrine nearly does the opposite of all three of the things mentioned in the preceding paragraph regarding the 25-series.  It has no universal planning horizons for planning training.  Rather, it calls for each organization to have an individual, discreet, and singular planning horizon based on the organization’s assigned mission.  Typically the CTC rotation serves as the end point of the planning horizon, focusing the organization on planning between receipt of mission through CTC rotation.  There are many problems with this approach.  It puts every unit on a different planning cycle.  It draws the commander and planners to only think about that discreet window of time (as opposed to the 25-series methodology which maintained Long, Short, and Near-Term planning as continuous activities, enabling continuous planning, beyond a particular organizations CTC rotation or change of command.)  The three windows of Long, Short and Near-Term allowed for three distinct types of planning.  Different aspects of planning and preparation were divided-up over the framework of Long, Short, and Near-Term.  Now, under 7-0, it is unclear how much planning should be done within the singular, comprehensive, unit training plan, and how much (if any) should be left for subsequent planning after the publishing of the unit training plan.  It presents difficulties for senior commanders and installation leadership to divide up training resources.  Units can no longer as easily collaborate and divide up resources at regular quarterly or annual training meetings.  It also presents a difficulty with costing training readiness.  From the highest levels, resources are planned, programmed, budgeted and executed based on the fiscal year.  This fiscal year allotment continues down through the echelons until at some point (not clearly defined) it must be translated into separate, unique, and discreet mission planning timeframes.  Our Army’s present inability to cost training readiness is likely largely due to having abandoned the planning methodologies (and overall unit training management processes) found in FM 25-100.

All of the above stated short-comings in the 7-0 series can, in theory, be overcome.  7-0 calls for the operations process and specifically, the military decision-making process to be the method for planning training.  This is how the Army plans operations in war and, according to current doctrine writers, should be how we plan training in garrison.  Truly thorough mission analysis at echelon should reveal to the commanders at echelon all the requirements to construct training plans that meet all the details found in the former 25-series doctrine.  A comprehensive mission analysis should identify all aspects of resources, all factors related to time, and facilitate comprehensive course of action development.

Recent experience with the other Doctrine 2015 publications would suggest, however, that unit commanders and staffs need more than this.  They need procedures and processes more user-friendly, time-tested, and more readily accessible to staffs around the Army.  The military decision-making process may be a good framework for planning discreet military operations, but the Army, in its wisdom, builds other planning frameworks for other types of problem solving.  Targeteers use the decide, detect, deliver, and assess methodology.  Risk managers use the risk management process: identify hazards, determine initial risk, identify control, determine residual risk, and implement controls.  And there are other specialized planning processes still in doctrinal use within the Army.  These processes are all versions of the operations process which have been tailored for a unique specific function.  These various processes all must be nested within the overarching operations process conducted by the commander and the staff.  But the Army developed and uses these separate processes because they make the application in their specific areas easier.  They facilitate planning.  This should be the same for the planning of training.  We should be using the process that the Army organically developed over years of experience to assist the commanders and staffs at echelon in planning training.

We need an honest self-assessment with regard to the state of Doctrine 2015.  The Army may be able to wait for much of its doctrine to fix itself overtime.  What the Army cannot wait for, is its Training Enterprise – down to the company level – to fix itself.  FM 7-0 must go back to the drawing board.