Since 1945 there have been repeated Western attempts to construct or reconstruct armies in the developing world. At least four spring easily to mind: in South Vietnam, by the French and Americans since the early 1950s; in the Congo/Zaire, mostly by Belgium, since 1960,[1] in Afghanistan, by the Soviet Union from 1980-1990 and by the United States and its allies since 2002,[2] and in Iraq from late 2003.[3] There are also a host of lesser examples. Since 1998 and the creation of the new domain of security sector reform (SSR), many of these programmes have been described as SSR.

Security sector reform can be described as the effort to make all the security agencies of any given state democratically accountable (through parliamentary, citizen, and other open scrutiny) and effective. Army construction or reconstruction efforts however have usually focused much more on imparting effectiveness. Yet such efforts have often made observers wonder whether forces are being made more effective in carrying out repressive functions: many United States army reconstruction efforts in Central and South America have had questions raised in this regard.

While noting such potential problems, this paper asks to what extent the experience gained since 1945 can be pulled together in a unified framework to guide army reconstruction efforts. Surely the mixed record since 1945 might be aided by a coherent set of guidelines? Since 2007 there have been at least two attempts by the British and United States armies to write doctrine for their efforts in Afghanistan and Iraq, and the French Army is also understood to be examining this question. But how effective are these national frameworks, and how universally useful might they be beyond their specific nationally-tailored circumstances?

There are at least two major problems involved in building a universally applicable army reconstruction framework. The first is the growing record, now almost accepted as a working rule, that development and indeed security sector reform efforts should be context-specific.

The second is that projects involving the importing of Western values and standards into the developing world appears from experience to be very risky. Yet if a framework could be designed which balanced a certain level of ubiquity with flexibility for local conditions, it might prove very useful indeed. Armies have major political importance, and refashioning them seems certain to be an ongoing political and operational challenge.

Heiner Hanggi has said '..[I]n practical terms, SSR varies substantially according to the specific reform context. There is general agreement that no common model of SSR exists and that, in principle, each country adopting SSR constitutes a special case and hence a different reform context.'[4] This reflects decades of pre-SSR development experience, as it was learned sometimes slowly and painfully that 'economic development,' in the original conceptualisation, was not appropriate for all countries and regions. The problem is that army reconstruction sees the same group of international interveners – mostly the United States and the British armies, and their retirees serving as contractors – deploy time and again to new settings, mostly attempting to implement variants of their previous military experience.

Context-specific development and SSR efforts is much more sustainable, as it is tailored to local conditions. But when do we trade away Western core values? Where northern expectations conflict with local practices, donors and other Westerners involved are faced with complicated choices. Part of the answer may involve remembering that human rights may not be as cross-culturally applicable as they might seem.[5] The 1948 Universal Declaration of Human Rights was an essentially Western construct, and Northern thinking dominated many of the following legal instruments as well. Scheye and Andersen suggest that a contextualisation of human rights standards may provide part of the way forward: ‘..choosing between different values, or at least in the short to medium term refraining from attempting to promote them all at once.’[6]

To adjust to each specific situation, it might be best if designers of army reconstruction programmes clearly identified which SSR standards were most important for each programme. Trade-offs might then need to follow, probably, to ensure sustainability, for the medium term at least.

First compiled was the British Army’s Doctrine Note 07/16, Developing Indigenous Armies, completed in 2007. The Note says that ‘development of an indigenous army is easier to describe than to define.’[7] It divides the task into preparation, recruitment, training, and operations, while noting that these kinds of distinctions are not so clear in real life. Training an indigenous army should be ‘characterised by understanding and assessment of the indigenous soldiers’ capabilities.’[8] Ideally, the content of the training would be decided by the indigenous soldiers themselves, though this is usually not possible from the outset.

The final stage is transition to self reliance, in which one needs to express success or failure of the reconstruction effort in terms of regional normality. Developed-world standards are not necessarily applicable. Timing the transition from directing efforts to mentoring indigenous trainers or commanders is ultimately an intuitive judgment based upon the level of indigenous capability and the capability levels normal in the region.

The comparable U.S. Army manual, Field Manual 3-07.1 Security Force Assistance, was published on 1 May 2009. It defines Security Force Assistance as ‘the unified action to generate, employ, and sustain local, host-nation, or regional security forces in support of a legitimate authority.’[9] The manual focuses on the mechanics of training foreign forces. The task according to the U.S. model includes organize, train, equip, rebuild and build, and advise and assist phases. The U.S. manual presents building up foreign security forces as almost a purely technical activity – as the text lacks consideration of political factors, in contrast to its British counterpart.

The U.S. and British manuals take a differing approach to the quality and nature of the new force: while the British manual says that ‘every …plan for engagement with indigenous forces should be steeped in cooperation with local and regional military-cultural normality,’[10] the U.S. manual has a stronger emphasis on replicating U.S. practices: ‘..many armies lack a professional NCO corps; establishing one for a foreign security force may prove difficult. In the meantime, adjustments will have to be made..’[11] The two manuals' principal weakness is their tactical focus, but this is inherent in military doctrinal manuals intended to be used by soldiers in the field. The political maneuvering and compromise required to successfully arrange army reconstruction programmes, or other stabilization lines of operation, is not usually covered by military manuals.

Based upon the dissertation research, the author's model has three major components. Vital preparatory considerations, including the peace accord, lead to either the immediate creation of interim forces, or a more extended assessment and design phase based upon the OECD Handbook's ideas. Perhaps the most vital factor in the entire process is not strictly related to armies at all – a wide-ranging national security and defence debate, to build consensus on the shape of the future state armed forces. Another important factor to note is the grey oval representing the ubiquitous presence of non-state security actors, usually far more influential that state forces. 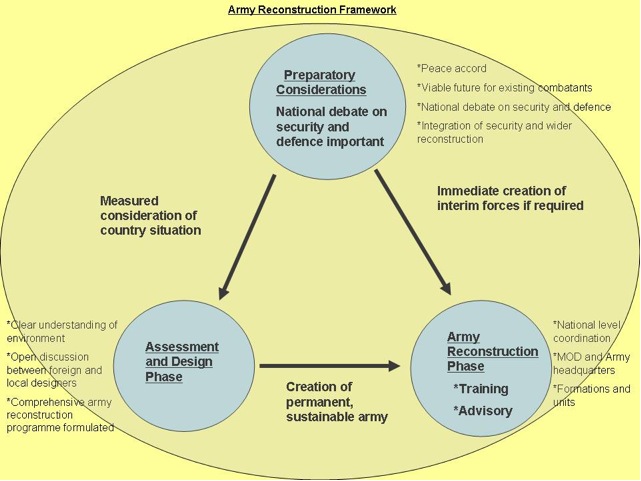 The point of this paper is not to advocate one or the other approach, though the author would argue his own approach is based on significant research and consideration. The issue at hand is whether such a universal post-conflict army reconstruction framework is possible, and to what extent it is usable and useful. Therefore the author offers these models above and the basic question for discussion.

Colin Robinson completed his doctoral work with Cranfield University in March 2012. Previously he worked for the New Zealand government (Army Force Development and Ministry of Defence), United Nations (electoral missions in Georgia and Liberia and HQ DPKO in New York, as well as briefly with the Office for Defence Force Development, East Timor), and military-related policy research institutes (International Institute for Strategic Studies, and Center for Defense Information, Washington DC). He was awarded his MA in War Studies by King's College London in 2001, and a BA (Honours) (First Class Honours) by Victoria University of Wellington in New Zealand in 1999.

Readers may also like a parallel article on the new e-journal 'Journal of Military Operations', entitled 'Building a Hollow ANSF - Vietnam Revisited' by Sergio Miller (a SWJ contributor).

It will not be comfortable reading.

Registration is required, it is free and easy to complete: https://www.tjomo.com

Dr. Robinson: I would argue that a universal framework for such institution-building is of limited theoretical utility and that institution-building in practice is virtually impossible in a post-colonial world. The theoretical benefit of such a construct is limited by the already well-established relationship between ends, ways, and means in general strategy and the subordination of action to political goals in strategic planning. As you describe in your framework, any deliberate effort to achieve political objectives is inherently complex, dynamically interactive with its context, and naturally recursive. So, your framework validates proven principles of strategy. The hazard in building indigenous security institutions, as in all cases, is in the practitioner fully comprehending the complexity and dynamism of the endeavor. Slaving over simplistic interpretations of universal constructs dooms the practitioner to costly failure.

The practical utility of any framework for building security institutions seems dubious given the requisite conditions for success. Foremost, one must consider the goals that a would-be institution builder might have. A power which seeks to subjugate the population purely for its own ends would be compelled to use exceptional barbarity to overcome, in most instances, the obstacles of increased popular politicization and interference by rival powers. It would have already pre-determined the nature and content of the policies it wishes to build a consensus around and found its willing constituency before intervening.

A more benign power would be constrained to some degree by the given political lines and culture. It is hard to imagine an intervention in which institution-building was called for where the political and social context would be conducive to establishing an effective and efficient indigenous security institution that was not also a potential threat to its own population. Future interventions by benign powers would presumably be triggered by failing or failed states. So, there would naturally be serious dysfunction in the political environment and hostile constituencies eyeing each other in those scenarios.

However one chooses to formulate the process, the enterprise of institution-building is fraught with challenges that may well be insurmountable. Reconstructed armies (gendarmeries, etc.) cannot be isolated from the political/cultural milieu they live in. They can thus be built, but their ultimate trajectory will not be in the hands of the foreign builders. Security institutions are instruments of the dominant indigenous constituency. Local context and indigenous cultural forms point the way towards more organic and consequential tactical initiatives, but they also ought to remind us that immutable barriers stand in the way of fashioning indigenous security institutions which suit both the interests of the intervening foreign power and those of the indigenous population as a whole.

If one's efforts cannot be reasonably anchored on the intended ends, it seems foolish for a foreign power to attempt such projects unless otherwise compelled by some other, more vital, ambition or pressing circumstance. Whatever the given pretext, the same caveats apply when considering what one can reasonably expect to accomplish. Thus, there is benefit to be gained from considering past practices in the establishment of security institutions, but the emphasis should be on the universal limitations that they reveal rather than on an ideal process which tends towards reductionism and hubris.