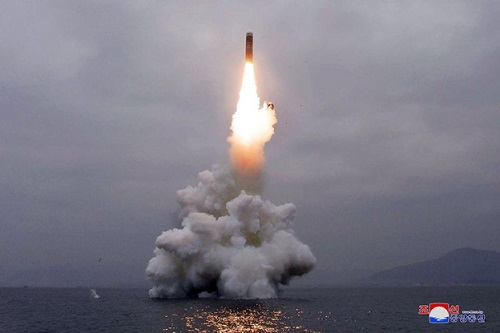 North Korea has always relied on provocation to preserve regime stability. The Kim regime refuses to recognize the 1953 armistice as an end of the Korean War and desires to reunite the peninsula under North Korean control.[i] Even in the face of international pressure, North Korea has developed nuclear weapons to combat threats to the regime and maintain Kim’s survival.[ii] The successful Pukguksong-3 submarine based missile launch earlier this week is the latest escalation of North Korean’s threatening behavior.[iii] Kim now has a two-pronged nuclear arsenal capable of reaching U.S. forces in Japan, Guam, or even Hawaii.

The United States must take immediate measures, both independently and multilaterally, to counter or eliminate the North Korean threat by using all instruments of national power. Policymakers should consider three policy options: containing North Korea’s capabilities, destroying North Korea’s capabilities without regime change, and compelling North Korean regime change. All of the policies proposed aim to support the goals outlined in the 2017 National Security Strategy to denuclearize the Korean Peninsula and preserve the non-proliferation regime in Northeast Asia.[iv]

The first policy proposal is to contain North Korea’s nuclear and missile capabilities to prevent any expansion of nuclear technology or any aggressive use of those weapons. For most of the past six decades, the United States and its allies have tried to prevent a nuclear-capable North Korea. Unfortunately, these plans failed. This policy should focus on containing Kim’s current capabilities through diplomatic means, hindering any expansion of this threat, and punishing the regime with harsh economic sanctions when necessary.

President Trump seemed to make progress at his initial talks with Kim in 2018, but over the past year, North Korea conducted multiple missile tests and continued its nuclear expansion.[v] Sanctions alone have not stopped North Korea from developing nuclear weapons or testing new delivery systems, in part due to Russia and China’s lack of enforcement.[vi] America must continue pressuring the Kim regime, while also working closely with allies like Japan and the Republic of Korea, and even adversaries like China and Russia. Through cooperation with this broader coalition, the United States stands a higher chance to ensure that sanctions are effective and to prevent the growth of North Korea’s weapons technology. Additionally, the United States and its allies must be willing to reduce hostility towards the DPRK for Kim to agree to any halt of weapons development.[vii]

A containment policy is the most feasible, acceptable, and suitable of the three proposals, both domestically and internationally. This policy would not require an increase of U.S. troops in the region. The only substantial additional cost would be for any potential incentives that America might need to make to gain Russian and Chinese support. If North Korea continues developing and testing weapons, the U.S.-led coalition could ratchet up pressure accordingly. However, this policy comes with two significant risks. The first is that China and Russia could continue providing tacit support to the Kim regime, thus reducing the effectiveness of economic sanctions. The second is that without the threat of U.S. military repercussions, Kim might very well continue with his weapons development.

A second policy proposal focuses on destroying North Korea’s nuclear and missile capabilities without forcing regime change. This policy directly meets the intent of the NSS by denuclearizing the peninsula and fostering non-proliferation. This plan is a complete departure from previous U.S. policies towards the DPRK by using military force to destroy the nuclear and missile threat. North Korea has violated every denuclearization agreement ever reached, but never before has the United States and its allies compiled their resources to apply maximum pressure to the regime. A military threat would force Kim to choose between nuclear weapons or regime survival.[viii]

Destroying North Korea’s nuclear and missile capabilities would require, at a minimum, a combination of precision missile strikes and aerial bombardment. Ideally, special operations ground forces would be used to ensure the destruction of all facilities and weapons. Assuming that military forces have adequate intelligence and assets in place for precision targeting, the United States could conduct this operation unilaterally. However, the United States would need to provide additional troops and air defense capabilities in South Korea and Japan to defend allied population centers in the event of a North Korean retaliation, especially now that the DPRK has nuclear warheads that can fit on ballistic missiles.[ix] The United States must continually coordinate with its allies and China to mitigate the risk of Kim’s nuclear retaliation.

The United States would need to reposition long-range precision missiles, air defense systems, and bombers to the region. Even though this plan does not advocate for an invasion of North Korea, the U.S. should prepare forces in South Korea for the potential for an immediate retaliatory invasion from DPRK forces. In this option, the offensive actions taken by the U.S. and its allies are proportional to the threat and avoid unnecessary North Korean civilian casualties. This plan does come with additional risk compared to the containment policy. North Korea could retaliate with nuclear weapons aimed at Seoul or Tokyo. China or Russia could support the Kim regime economically or militarily to prevent complete destabilization of the North Korean peninsula, potentially leading to a broader war. However, if the United States works closely with regional players and limits operations to only destroying North Korean capabilities, it will reduce these risks.

A third policy seeks North Korean regime change. This policy not only meets the regional end states in the NSS but also reduces the North Korean threat for the foreseeable future. While deposing the Kim regime should lead to a more stable North Korea, this plan would require the greatest preparation, deployment of troops, and continued engagement even after the regime change. The most important question facing the United States is whether North Korea should retain its status as an independent state or if South Korea should control the unified peninsula after Kim’s removal.

The United States could consider a wide variety of options to achieve regime change, from an assassination to a propaganda campaign to an invasion by U.S.-led forces. All of these options could enable regime change, but policymakers must also consider the long-term aftermath of each option. The best chance of success to ensure the overthrow of the Kim regime is for the United States to invade North Korea, depose Kim, and assist in the country’s long-term stabilization through a sustained occupation. Additionally, the United States should also destroy North Korea’s nuclear capabilities to prevent their future use.

Although the United States has the resources to undertake a full-scale invasion of North Korea, this would require the greatest marshaling of forces since the first Korean War. Even so, this massive undertaking would best support the immediate goal of regime change and the subsequent stability requirements after Kim’s removal. This policy would almost certainly face opposition from China and Russia. China wants to maintain stability at its southern border and opposes an increase of U.S. forces in the region.[x] After eighteen years of constant war in the Middle East, along with the potential for massive casualties from a nuclear war, American policymakers could balk at the expansive requirements needed for this undertaking.[xi] Even so, the prospect of a U.S.-friendly and denuclearized North Korea, especially with the growing threat from China, could outweigh the risks associated with this policy.

Each of these policies has positive and negative attributes. The containment policy needs the fewest resources but requires buy-in from all regional partners to enforce the sanctions needed to contain North Korea’s nuclear threat. However, this policy has failed in the past and could lead to a rush of new North Korean nuclear capabilities. Destroying North Korea’s capabilities without regime change straddles the middle ground. It requires minimal additional resources and should be acceptable to almost all players, both adversaries, and allies. The main danger with this plan is that the DPRK could retaliate with nuclear weapons and rapidly escalate the conflict. Regime change presents the best chance of achieving the long-term U.S. interests, but also requires the most significant amount of resources and carries the highest risk. Ultimately, the United States must continue engaging the North Korean regime and leveraging regional partners, to include China and Russia, to do the same. Without China’s support, economic pressure will not achieve the desired effects. By combating the threat with an American-led coalition, the U.S. will build diplomatic ties while also laying the foundation to successfully deal with any future escalations of the North Korean threat. The longer the United States ignores this threat, the greater it will become, leaving the US with fewer options to deter it.[xii]

[i] David S. Maxwell, “A Strategy for Dealing with North Korea’s Provocations,” International Journal of Korean Studies XVII, no. 1 (Spring 2013): 71.

Major Justin Magula is a graduate student at Johns Hopkins University School of Advanced International Studies. He is a U.S. Army Strategist with four deployments to Iraq, Afghanistan, and Qatar. The views expressed in his articles are those of the author and do not necessarily reflect those of the U.S. Army or Department of Defense.