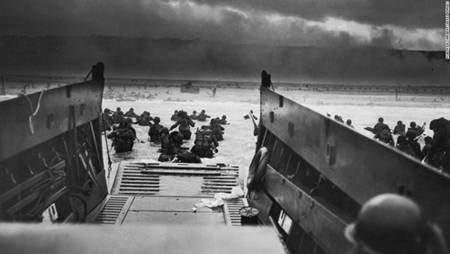 Combat is decidedly mortal to the participants.  Leaders, officers, and enlisted, are charged with execution of orders and the strict adherence to commander’s intent as the responsible agents for the men they serve—both above and below them.  Failure to do so in peacetime can be professionally suicidal.  Failure to do so in combat may be either suicidal or the key to success.  The difference is called judgment.  And good judgment is the Holy Grail of any combat unit.

On rare occasions in our history, the leader on the ground, at the crux of a fleeting moment on the battlefield, has decided to disobey his instructions for what he judges as the greater good of the unit and the larger task at hand.

A point often forgotten is that enemy gets to vote.  Conditions may be assumed by the chain of command when orders are developed, but they cannot rigidly be assumed at the sound of the first hostile round.  We pay our leaders, at all levels, to exercise judgment rather than rote mindless adherence when the enemy votes. Judicious leadership, combined with the changed nature of the environment and the immediate necessary actions, lead to success.  Failure to recognize significant changed conditions leads to defeat. D Day is replete with positive examples of this and should serve as a guide for future combat leadership.

At approximately 0830, 6 June 1944, Omaha Beach was virtually lost to the Allies.  Disaster stretched across the 3 plus miles of beach.  Bodies piled from horizon to horizon.  None of the extensive fire support was either effective or even applied due to weather and smoke.  Units ceased to exist as the ramps dropped on the hundreds of landing craft. Not a single command radio functioned on the beach, robbing the commanders afloat of the ability to render sound decisions.  LTG Omar Bradley, the overall commander, began to formulate plans to withdraw from the beach and land behind the British at Juno.  He and the remainder of the force, were saved by several junior officers and NCOs who disobeyed orders with studied judgment.  They realized that disobeying clear orders was a necessity for success where adherence would underwrite defeat.

Part of the initial assault plan was that 32 Duplex Drive tanks would be launched approximately five kilometers off the beach.  They would swim in and provide surprise armor support to the troops on the beaches.  Their ability was proven in the calm training waters of Britain.  Normandy was not a calm sea.  Waves, surging erratically with five to eight foot swells, swamped 100% of the DDs launched.

Two Navy LT.JGs, equivalent to an Army 2Lt, each in charge of an LCT (Landing Craft Tank) with four tanks aboard, saw the 100% failure of launches left and right and refused to drop the ramps--keeping their tanks on board.  They did not ask permission.  They independently saw the folly of the act and judged that better opportunities might exist.  They did not report this.  They simply continued toward the shore with their loads intact.

As the morning wore on, they each independently maneuvered closer to the shore looking for opportunities to dryland the tanks desperately needed. All this with no communications between them or their higher command.

Noting the disaster ashore and the horizon to horizon accumulating junk, the beachmasters responsible for the landing, closed the beaches and ordered all ships to stand offshore—effectively isolating the already decimated First through Third waves.  The Lts each heard the order to close the beach.

This was a decision made by the assault force landing admiral who had no communications with the beach and could not see the close-in situation. Some troops had already made it to the top,  but he could only see the huge piles of burning junk, overturned and broached assault craft as well as the total failure of the demolition elements to clear obstacles.

Each of the Lts saw independently, the opportunity to land regardless of the order, as they each intuitively and clearly understood the necessity to get those tanks ashore.  At virtually the same time, they made the decision to crash through everything and land the tanks.  They were immediately opposite Dog Red and Easy Green.

They saw each other and acted in tandem, aligning about a kilometer out and surged full speed ahead firing their 20mms and .50 calibers as they went forward.  Each crashed their loads on the beach which promptly went to work.  Six were immediately hit and burned.  One retreated to the deeper water with the turret above water and began firing.  The eighth surged across the beach and made it to a protected defile against the cliff face and began to engage targets on the bluff. There was no functioning radio on board. The two surviving tanks will begin to snatch victory from disaster.

Seeing the two craft successfully land, the admiral ordered the beach re-opened and reinforcements to move past their destroyer shield.  The 4th thru 6th waves, follow-on reinforcements, were considerably reduced by the loss of assault craft in the first three waves.  Regardless, they were reinforcements, intact units and badly needed.

The Rangers also practiced selective disobedience. Previously, at approximately 0700, companies A, B, and C of 2d Battalion landed on Charlie Beach--the extreme west flank beach. They were immediately virtually decimated as A/1-116th  had experienced.  Of the 64 that landed with A, 34 of the 64 were killed outright. B Co had a similar experience.  C Co had 19 killed and 18 wounded out of the 68 that landed.

The surviving officers and NCOs, two Lts and two platoon sergeants, dragged their remnants to the cliff face out of sight and began to recover.  Their location was a deep V inverted into the cliffs which gave excellent protection from German sight and fire.

Quickly, the leadership took out their bayonets and climbing ropes and began climbing, back to back, up the narrowest portion of the V using the bayonets to secure handholds.  Atop the crest, they found they had flanked the German defenses. The Rangers dropped their ropes and brought up the rest of the survivors.  Though their orders were to go to PDH ASAP, in the words of several Vets I interviewed: “We were pissed and mad as hell.   We were going to kill some Germans and do it now.” They did. PDH would have to wait.

Their first objective, and a crucial part of the German defense built on the enfilade aspects of the beach, was the deep concrete flank bunker facing along the entire beach just above Charlie Beach, easily visible today from the National Guard monument. It held both an anti-tank gun, as well as, a 20mm with a MG42 machine gun above.  The Rangers immediately cleared the MG42 from the rear and roped down above the bunker, destroying it with a white phosphorous grenade.  This markedly diminished the fire against the Dog beaches and ceased a great deal of the enfilade fire that was halting movement.  The beach forces could now begin to move forward and up the cliffs.

Disobedience that day began to be a shared virtue. Offshore about five kilometers, was the destroyer line.  Their job was to protect the landing craft from interference by German E Boats-- which never showed--and to assist in shore bombardment.  As the assault progressed--or lack thereof--they became a shield to returning craft as well as the last safety zone for the inbound assault craft.  To this point, they held their fire on the beach due to lack of a clear view.

The Captain of the Frankford, a LT CDR, was closest to the shore and grew increasingly frustrated by events.  The many failures were constantly passing by his ship with wounded and dire tales. He went to the gunnery officer's position and began to examine the beach with the best telescope on the ship.  What he saw through all the chaos was the lone tank that made it to the cliffs as well as the broached tank in the water.  He could see those engaging targets.  He immediately moved his ship, absent authority, closer--less than 800 meters from the beach and a rising tide. There was less than three feet under the keel.

Immediately, he began firing at the targets the tanks were engaging.  The tanker near the cliff quickly figured out what was happening, and a sergeant rose out of the turret with a signal flag and waved at the ship.  The two in tandem, then began a methodical bombardment of the cliff bunkers. The tank would fire a round indicating target and the Frankford would mass fire at the same spot with positive results.  Several bunkers were undercut and literally rolled down the cliff face. One such undermining is clearly visible today above Dog Green as a deep “v” incised in the crest.

Very quickly, the other destroyers, also absent authority, began to support.  They moved in much closer to where their observers could physically see the cliffs and bunkers and began to engage.  The shore bombardment admiral, seeing and sensing, then ordered what was already occurring. All eight destroyers were ordered to commence firing and support the beach with direct fire.

The eight destroyers echeloned themselves across the entire beach area so each had a clear view with the Frankford closest to shore.  As they fired, they methodically, at Dead Slow, began to move from west to east firing as they went as in a pirate broadside.  At the extreme eastern end, the deeper water ships executed a 180 degree turn and continued to fire as they moved west.  The Frankford and two others, too shallow to execute a turn, simply shifted into Reverse Dead Slow and moved west, stern first firing as they went.  This was THE moment for the troops ashore.  They saw this, took heart, and for the first time, began to coalesce and move forward.

This was the pivotal watershed moment of D Day--three Navy officers and four Rangers, disobeyed orders and created the decisive acts of disobedience that saved the beach.  As a major in Frederick the Great's German army admonished a lieutenant during a battle:

"The King gave you a commission because he assumed you knew when to disobey an order."

There is a lesson here.  Flexibility exercised with good judgment is a pearl without price if it resides within the mind of the man on the spot.